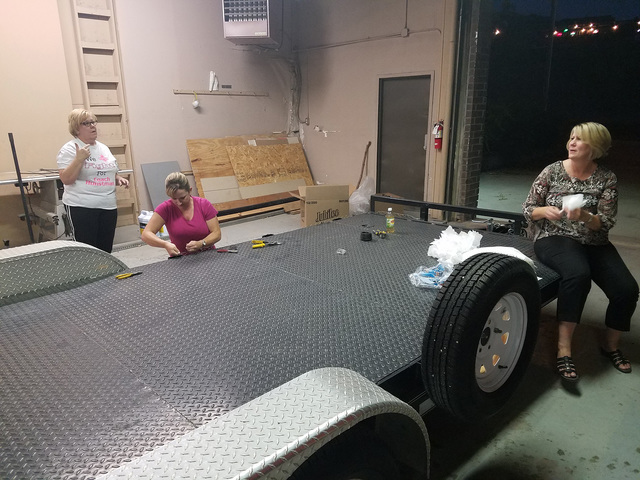 Toni North (standing), Jessica Thompson and Jennifer Klapper (seated) are working on a Tonopah High School alumni float as shown in this Sept. 6 photo. The float is being prepared for the high school's homecoming celebration set for Sept. 23. David Jacobs/Times-Bonanza & Goldfield News

The countdown is on for Tonopah High School’s homecoming celebration Sept. 23, with at least one alumni group making a parade float.

Graduates from at least three classes — 1981, 1988 and 1993 — have been busy in the old Tonopah firehouse off Main Street, where they are building the float.

They heard about Tonopah High School art teacher Karen Whelan encouraging alumni and community members to get involved in homecoming.

“I want to make it a huge, huge turnout,” Whelan said recently while overseeing current students making homecoming banners and other unique artwork.

But Whelan’s message was not the only motivation for the alumni getting involved.

“We’ve long felt that the kids didn’t know how to make a real float, like the floats when we made floats for homecoming,” Toni North, a 1981 Tonopah High School graduate, said jokingly.

North is joined by Jennifer Klapper, a 1988 graduate of the school, and Jessica Thompson, a 1993 graduate.

Building the float is not a small task, so the ladies started three weeks ahead of homecoming.

The float is being built with chicken wire and napkins. A flat vehicle-transport trailer is serving as the float’s platform. As part of the design, the napkins are being stuffed inside the chicken-wire holes.

For now, alumni are not specifying what the float depicts. It’s considered a surprise.

It, however, is expected to feature the Mucker mascot, something involving the homecoming football opponent — the Round Mountain Knights — and a saying or theme to make it look like a football field.

The women thank the town of Tonopah for allowing them to use the garage of the old firehouse since none of them have a garage large enough for the float/trailer.

Any alumni interested in joining the effort are invited. They are asked to come down to the old firehouse between 6:30 p.m. and 7 p.m., any Tuesday, Wednesday or Thursday before homecoming.

“Stop by and hang out with the other alumni,” Klapper said.

Thanking those who already have donated materials, alumni said additional donations of items continue to be welcome.

They including chicken wire, poster-board, poster-paper and spray paint. Alumni working on the float hope others will be on hand to cheer at the Sept. 23 parade in Tonopah.

Klapper decided to get involved because the school made room for them if they wanted to build a float.

“So here we are,” she said. “Keep your fingers crossed for us.”

North, Klapper and Thompson noted that they each have students in the high school.

“That’s extra motivation to show them what it’s all about,” Klapper said.

Klapper was glad to hear the current students had already started their homecoming efforts, beginning not long after the school year began in August.

“Hopefully, the way they have it set up, homecoming is going to be one of the best ones they’ve had in a long time,” Klapper said. “We’ve been waiting for this Muckers spirit to come.”

The alumni bring experience to the homecoming float-making. North said she helped make one “every single year” while a high school student.

Thompson, the 1993 graduate, explained why she’s thinks homecoming is important.

“I think the kids have lost a lot of the spirit of being in high school. They want to grow up too fast. Have fun. They need be more involved, I think. That’s what I tell my daughter. Life goes by way too fast.”