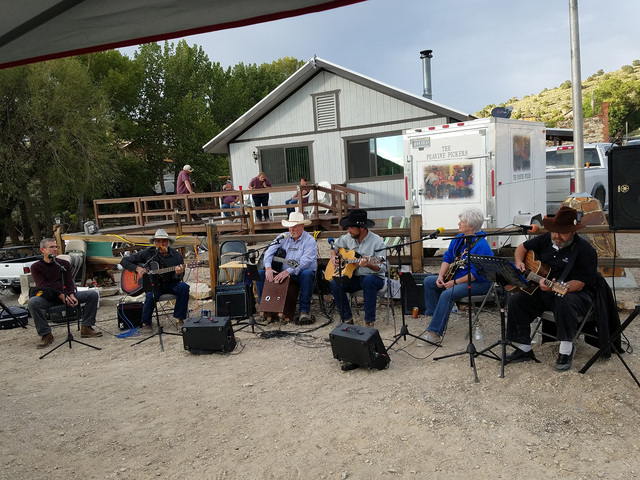 Here's a look at the festivities on Sept. 3 in the historic Nevada community of Belmont. This photo shows a musical performance featuring the Peavine Pickers, including Nye County Commissioners Lorinda Wichman and Dan Schinhofen on the right. The festivities helped raise money for the renovation of the Belmont Courthouse. In all, 112 raffle prizes were awarded. All prizes were donated. David Jacobs/Times-Bonanza & Goldfield News

BELMONT — For supporters of the Belmont Courthouse restoration effort, love of the historic building extends well beyond the tiny community in rural Nye County.

A crowd estimated at 300 turned out Sept. 3 in Belmont to celebrate the 140-year-old courthouse and raise money for its revival as a historical tribute to the past.

All proceeds go toward restoration of the courthouse, which heard its last case in 1905.

In talking about all the support for the project through 112 donated raffle prizes, event official Donna Motis paused for a moment.

She was trying to make sure she could list as many communities as possible from around Nevada and California, where businesses and individuals had contributed to the celebration.

“We had a lot of gifts, probably more raffle prizes than we have had in the past because everybody was so generous,” Motis said.

Reno, Las Vegas, Ely and Tonopah were among the Nevada communities that contributed with raffle prize donations along with Bishop, California.

“From everywhere,” said Motis, president of the Friends of the Belmont Courthouse group, which organized the event.

“Tonopah, all over in the state of Nevada, especially Tonopah. Tonopah is a great supporter of everything. Almost every single business in Tonopah donated to us.”

Prizes included a trip valued at $970 from the Northern Nevada Railroad in Ely, stays at the Atlantis and Peppermill hotel-casinos in Reno and new tires valued at $500 from Cal-Nevada Towing.

Festivities began at 9 a.m. and lasted into the evening in the community about 45 miles northeast of Tonopah.

Visitors walked along the streets, rode ATVs and spent time with friends and family as the day unfolded.

“We had a lot of people here,” Motis said. “Everybody had a great time between the horseshoe tournament, scavenger hunt, poker run, food and music.”

“We thank everybody very, very much for being here,” she said. “We appreciate all of the support that we’ve gotten from everyone for the courthouse because all of this money goes toward restoration of the courthouse.”

“Everybody has fun when they come to Belmont,” she added. “Belmont is such a cool place.”

John Terras, a trustee of the Friends of the Belmont Courthouse, enjoyed the atmosphere as he cooked hamburgers and hot dogs for the visitors.

“I see people enjoying our beautiful countryside and sharing that courthouse,” he said. “That is why we are restoring it. We don’t want an empty building. We want people to enjoy it.”

■ Friends of the Belmont Courthouse was formed in 2011.

■ Belmont was the Nye County seat from 1867 to 1905 when Tonopah became the county seat.

■ Construction of the Belmont Courthouse started in 1875 with completion in time for the nation’s 1876 centennial.

■ The courthouse was added to the National Register of Historic Places in 1972.

■ See more photos and video of the Sept. 3 courthouse celebration on the Times-Bonanza’s Facebook page.