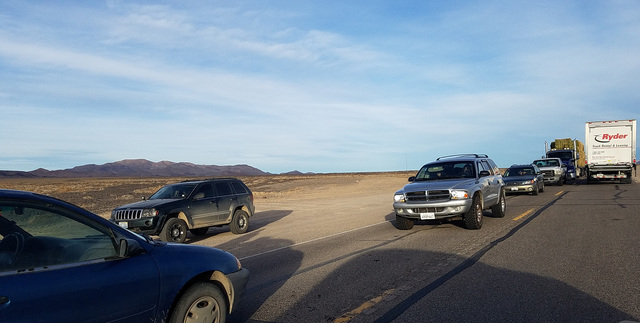 Traffic moves slowly through a road construction area west of Tonopah as shown in a Dec. 14 photo. The project is being led by the Nevada Department of Transportation. The work is occurring along the U.S. Highway 95/6 corridor. David Jacobs/Times-Bonanza & Goldfield News

TONOPAH – Motorists traveling along U.S. Highway 95/6 west of Tonopah are being encouraged to drive with care and have patience as a major road project continues.

About a 26-mile stretch of the two-lane highway is included in the construction area from just west of Miller’s rest area to near Coaldale Junction.

Signage indicates to expect up to 30-minute delays. As work continues, a pilot car is leading single lanes of vehicles while traffic headed in the opposite direction is stopped in the other lane.

The construction affects travel between Tonopah and locations that include Silver Peak, Luning, Mina and Hawthorne in Nevada’s Mineral County and Bishop, California.

The work also slows traffic making the trip between Reno and Las Vegas along the major highway connecting northern and southern Nevada.

The project is being led by the Nevada Department of Transportation.

“NDOT is widening the shoulder, adding passing lanes and flattening shoulder slopes as well as adding drainage on U.S. 6 from the junction of U.S. 95 to two miles west of Millers Roadside Park,” NDOT spokeswoman Adrienne Packer said via email in response to Times-Bonanza questions.

The project totals nearly $22 million, with Fisher Sand & Gravel Co. serving as the contractor, she said. The company is based in Dickinson, North Dakota with operations in Nevada.

The project is expected to take 250 days with the project first cleared to start this past July.

“The current plan is to work until the middle of March, suspend work for a couple of months, and then come back sometime in May to finish the contract,” Packer said.

Motorists are urged to use caution. Heavy construction equipment is in the area and traffic penalties are double in these work zones.