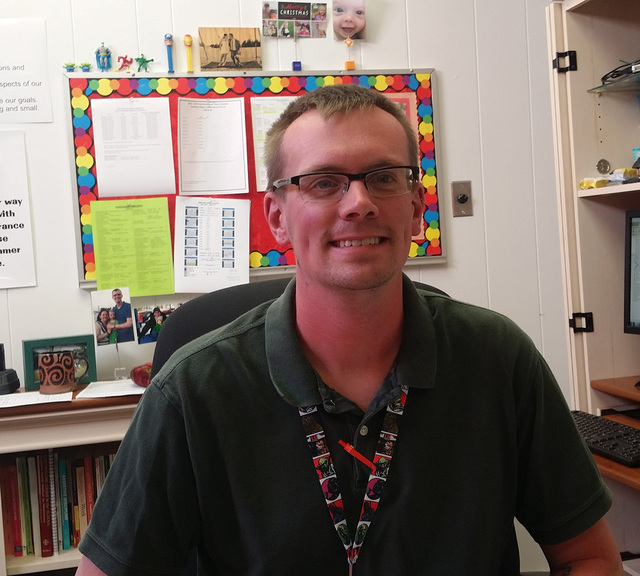 Scott Moore, the new principal at Tonopah Elementary and Middle School, as shown in a July photo in his office. Moore comes to Tonopah from Wisconsin. The school year in Tonopah started Aug. 8. David Jacobs/Times-Bonanza & Goldfield News

The start of the new school year at Tonopah Elementary/Middle School also brings a new principal there.

“I think it’s great,” he said of his new job. “I came from a small town to a small town so it’s kind of what I’m used to. It’s been interesting, so far, getting used to a new system. It’s tricky, but everyone’s been great, helping me out and figuring out what’s what.”

The biggest challenge was getting ready for the new school year, which started Monday.

“It’s in less than two weeks so we have to be ready,” Moore said in mid-July.

“I am excited to get started,” he added.

“I’m excited to meet the kids and the families and just see all of the good things that I have already heard about them. That is the most exciting part, when they get here and to see them for the first time.”

Moore was a kindergarten teacher for 11 years in Wisconsin, where he trained to become a principal.

An academic tie to Nye County brought Moore to Tonopah on July 6.

“Dennis Scherz, who is the associate superintendent of the county, he and I did our principal program together,” Moore said. “He’s from northern Wisconsin so we were in the same group. He knew that I was still looking for a principal job. He said, ‘I’ve got the perfect place for you if you want to interview for it.’”

“That’s how I ended up here,” Moore said.

Moore has a bachelor’s degree and a master’s degree in education from the University of Wisconsin-Stout in Menomonie, Wisconsin. His kindergarten-12th grade principal license comes from Viterbo University in La Crosse, Wisconsin.

Moore, who is married and has a three-and-a half-year-old child, said his adjustment to Tonopah is going well.

“I found a place to live. My family isn’t here yet so that’s been tough. But they’ll get here in mid-August.”

As Moore gets ready for the 2016-17 academic year, he is preparing for the adoption of a new reading series curriculum. The series is in line with Nevada’s “Read by Grade Three” initiative.

“That’s going to be a lot of work for us to sort through, get it all organized, and then teachers need training on how to use it with the students so we are going to work on that a lot,” Moore said of the reading series.

“We’re going to train at it and get good at it,” he added.

Other efforts are on his agenda, as well, including a new system focusing on promoting positive student behavior and a new computer student management system.

All school staff positions are filled, including 18 teachers.

“Other than that, it’s just going to make sure everything goes (well) on the first day, everything is smooth like it should be,” Moore said. “We’ll see about that.”

Does Moore have any advice for parents as their children head into the new school year?

“Read,” he said. “Check in with your kid every night. Don’t just ask them, ‘How was your day?’ because they will always say, ‘Good.’”

The elementary/middle school at 1220 Idaho Circle is home about 270 students.

As the students, staff and teachers arrive on campus, they may see a few changes.

“We laid some new sod in a courtyard this summer,” Moore said. “SolarReserve is going to get a few murals painted on our walls on the playground. We’re going to look for that in the fall. We haven’t set a date yet, but it’s happening.”

In addition, one elementary/middle school campus building has a new roof.