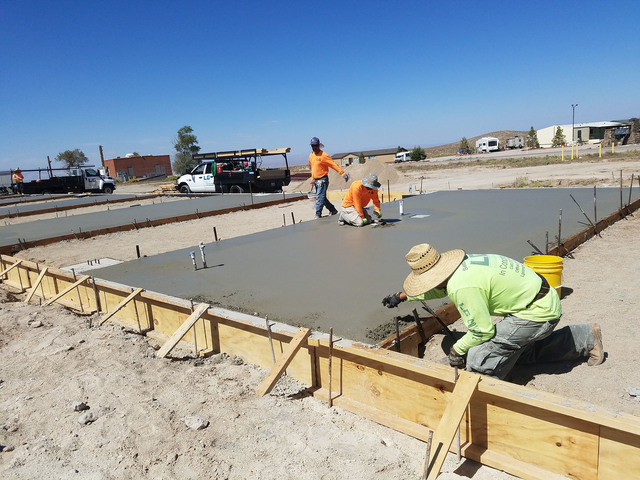 Workers are building a warehouse and self-storage building as shown in this Sept. 20 photo near U.S. Highway 95 and Radar Road. The project is through North Tonopah Development. One of the warehouse tenants is to be Frito-Lay Inc. David Jacobs/Times-Bonanza & Goldfield News

Crews are busy off U.S. Highway 95 near Radar Road, constructing two buildings, one of which will include warehouse space for snack-food giant Frito-Lay Inc. as part of the developer’s plans to help grow Tonopah.

The warehouse will feature four sections, part of which is to serve as the Frito-Lay warehouse, said Bruce Jabbour, senior vice president of operations with North Tonopah Development, which is leading the project.

Jabbour pointed to the raised concrete at the warehouse construction site.

“That’s actually a loading dock for them (trucks) to back in,” he said. “That will be for three sections, different companies.”

Licensed contractors from Las Vegas and Pahrump started the work about six weeks ago. They are estimated to finish in early November.

The construction site is in Esmeralda County, near the Nye County line. The land is owned by North Tonopah Development, which is to serve as landlord.

The project is separate from a planned travel plaza in the works nearby, also in Esmeralda County and through North Tonopah Development.

“Once we got approval for the travel plaza, we decided we want to help grow Tonopah,” Jabbour said. “We’re here. We’re a development company, not just housing and RV. So this is going to be the start on a smaller scale of bringing some. It could be retail space. It could be commercial space.

“So we’re looking for a few other companies. We’re talking to a few right now who are interested in coming to Tonopah because it’s right on (Highway) 95. It makes sense logistically to be here.”

Tonopah’s location along the major highway and midway between Reno and Las Vegas is considered a key strength for the community.

More business-related construction is planned nearby as part of an effort announced earlier this year.

“Once this is complete, we’re hoping to move forward on the other side (of Highway 95) and get the travel plaza going, breaking ground for there,” Jabbour said.

“That’s going to create even more jobs because we plan on putting in a couple of restaurants, fast food, plus a full gas station, diesel, and we’ll be able to welcome truckers,” he added.

The fast food restaurants have not been announced.

“Once the travel plaza is complete, that’s really going to boost growth,” he said, also speaking of job opportunities. “Of course the locals will be excited to come down, apply and work at this property.”

All of this, he said, means that “other people will want to move here.”

Esmeralda County commissioners recently were updated on the warehouse and self-storage projects. “One of the best tools that we have is the positive attitude to development that we have and the lack of bureaucracy,” states minutes from the Aug. 2 county commission meeting. “The fact that there are not a lot of regulations.”