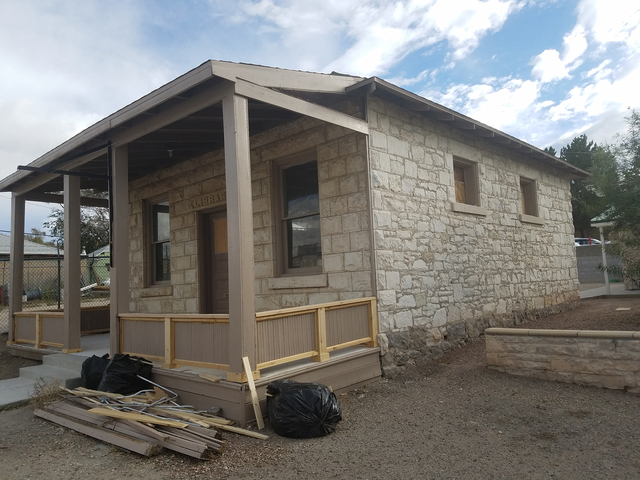 Tonopah’s old library is scheduled to be rededicated Oct. 15. The wooden railings on the porch recently were upgraded as part of an extensive restoration effort. The old library closed about 16 years ago to make room for a new library next door. David Jacobs/Times-Bonanza & Goldfield News

The finishing touches are being put into place as Tonopah’s old library comes back to life, 16 years after it closed to make room for a modern one next door.

A ceremony for the 111-year-old library is planned for 10 a.m., Oct. 15 at the building off Central Street.

“It’s a grand reopening,” said Dianne Ryals, Tonopah’s library director. “We’re going to have refreshments, and I hope, a lot of folks will show up and see the new old building because we’re happy with it. It’s going great.”

The building is on the National Register of Historic Places, added to the list in 1982.

The renovation will allow it to open again, this time as a business office and research center. That will allow for more room inside the newer Tonopah Public Library.

Ryals and her husband Gene helped spearhead the revitalization efforts, joined by other volunteers.

The renovations include electrical work, wiring, flooring, plumbing, painting and more, including upgraded wooden railings on the front porch.

Schoolhouse-period lighting is featured along with heating and air conditioning.

Because of the building’s historic nature, the work had to be approved through the state of Nevada.

“They did it almost exactly like it was,” Ryals said of the local conservation crew’s construction work. “Everything’s still got to be painted, and I’ve still got to get the windows adjusted.”

“I am really pleased with the work that they did,” she said. “The conservation crew was a big, big help in getting this done. If it hadn’t been for (supervisor/official) Dan Eason and the crew, we wouldn’t be having the grand opening on the 15th I don’t think.”

■ About 800 square feet, the old library’s service ended in 2000 when the modern Tonopah Public Library debuted next door.

■ The old library, known to generations of Tonopah-area residents, dates back to 1905.

■ In recent years, the old library had been used for storage, housing old books, shelving and old computers.