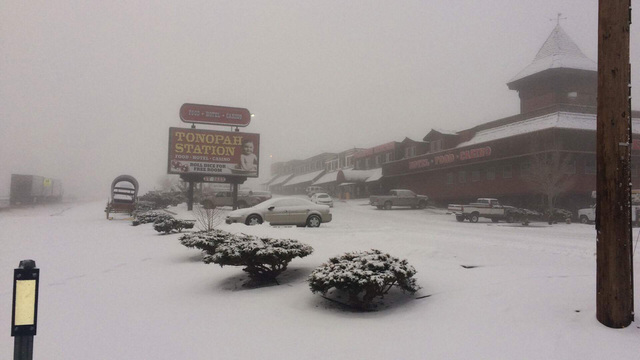 The National Weather Service reported about 2 inches at the Tonopah Airport. Snow fell around town on Jan. 13 and more could have fallen in upper elevations. More storms are on the way. Jordahnah Grover/Special to the Times-Bonanza & Goldfield News

Disappointed that the Tonopah area didn’t get the heavy snow other regional communities to the north received? Blame the Sierra Nevada mountain range.

Happy that Tonopah escaped the heavy snow? Thank the Sierra.

And whether you’re looking for more heavy snow, hoping it won’t happen soon or don’t care either way? Stay tuned.

That’s what weather experts are saying about the Jan. 7-13 atmospheric river. It brought heavy snow, rain, flooding, strong winds, ice, power and utility outages, depending on the time and location, to communities in Washoe, Storey, Lyon and Mineral counties and Carson City.

“The snowfall was so significant that we had a declaration of emergency by the governor,” National Weather Service meteorologist Steve Hannah said, referring to Nevada Gov. Brian Sandoval. “It was really a significant (weather) event.”

Tonopah and nearby towns escaped the worst.

“The Sierra Nevada mountains blocked a lot of the moisture,” Hannah said. “Not a lot of moisture was able to get across and affect your area.”

“Another reason is the track of the system kind of kept most of the moisture to the north of your area,” he added. “The reason Reno got hit quite a bit is because the moisture was spilling over.”

The latest round, Jan. 12-13, brought about 2 inches of snow to both Tonopah and Goldfield. No official reading was taken in Round Mountain, but a Times-Bonanza reader reports almost 6 inches fell there. Higher elevations around the region received more.

Fog or freezing fog also are occurring or forecast into this week.

The storm was so strong that the Nevada National Guard was called upon to bring fresh water to the tribal area near Sutcliffe and to help clear snow in Storey County, including in historic Virginia City.

The storm was tracked early in the week with projections of up to 7 inches of snow for Tonopah.

“That one came down the West Coast, went through the Reno area and moved to the south,” Hannah said. “It was impacting the entire region from California to western Nevada as it moved south.”

The storm, however, lost moisture, as it moved over the Sierra into central Nevada and Tonopah.

“To get snowfall, since you lost the moisture when it went across the mountains, there is less moisture in the air when it reaches your region,” Hannah said. “So it’s that much harder to get more precipitation out of it via snow or rain.”

Prior to the storm, a Winter Weather Advisory had been issued for Tonopah and northern Nye County.

“In this case, quite a bit of moisture hit the mountains,” Hannah said. “It snowed significantly on the Sierra Nevada, but not as much moisture as we thought made into your area so it did not get as much precipitation for your region.”

To the south, Mount Charleston received close to 20 inches. “We’re talking about 7,000 feet in elevation up there,” weather service meteorologist Reid Wolcott said of that measuring point. “The actual peak is up near 12,000 feet.”

As late January approaches, forecasters were keeping an eye on storms due to arrive late the week of Jan. 16-22.

Between 3 and 7 inches of additional snow was a possibility for Tonopah by Jan. 20 with higher accumulations of 6 inches to close to a foot possible in the mountains. A Winter Weather Advisory was in place.

“It looks like we’re going to have a series of atmospheric rivers coming to the West Coast again so we could see more accumulation of snow and rain, and it looks like it will have that pattern for the rest of the month,” Hannah said.

Meteorologists were monitoring whether some moisture from the south would further affect the Tonopah region.

If the southerly flow occurs, “Tonopah might be a little more favorable for getting some snow,” Hannah said. “But it’s hard to say at this time because the systems will evolve as time moves on, which would drastically impact where all of the moisture comes from.”

“With the terrain that we have here, a shift in wind direction can mean you’re getting precipitation or none at all,” he added.