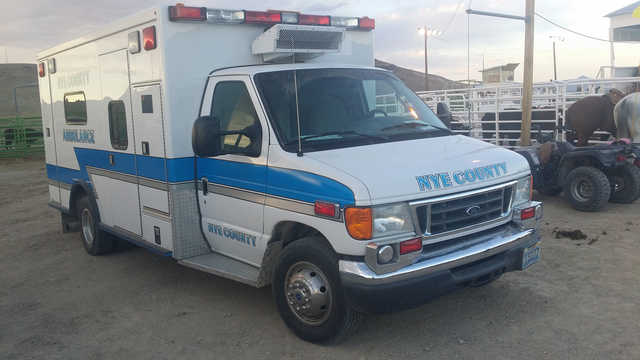 A Nye County ambulance as shown at the Tonopah Rodeo Grounds over this past summer. The Town of Tonopah is expressing concerns about ambulance and medical services in the region. Nye Regional Medical Center closed in August 2015, putting additional strain on volunteer ambulance crews. They now need to travel more than 100 miles to the nearest hospital. David Jacobs/Times-Bonanza & Goldfield News

Editor’s note: This is part of a continuing series of stories in the Tonopah Times-Bonanza & Goldfield News, looking at challenges facing rural medicine in the region.

The town of Tonopah is on record with high-ranking Nevada officials, detailing medical challenges facing the community and rural Nye County.

“The integration of health care in frontier/rural settings has never been more important,” states a letter signed by Town Board Chairman Duane Downing on behalf of the town. “Declining resources at all levels are a real danger,” he said. “Leveraging all components of health care into a sustainable, available system must be embraced.”

“This requires clinics, doctors, EMS, community paramedicine, and all other available medical care to be viewed as a total package,” Downing said. “Specialized systems cannot survive outside a large population center.”

The letter followed a July 27 public workshop in Tonopah where a bleak picture was outlined involving Nye County’s ambulance service.

Nye Regional Medical Center closed in Tonopah in August 2015. That is forcing ambulance crews to take the sick and injured more than 100 miles to the nearest hospitals in Bishop, California and Hawthorne in Nevada’s Mineral County.

The distance means hours-long roundtrips for ambulance crews, taking them away from their jobs, families and homes. As a result, the ambulance crews have lost staffers.

Also, the ambulance service faces financial challenges, including those involving people being underinsured and payments from Medicare and insurance that doesn’t cover service costs.

“Nye County Ambulance is a ‘Special Revenue Fund,’” Downing wrote. “It must live on what it makes. It receives no tax dollars.”

Some details were outlined in Downing’s letter:

■ The cost of ambulance transports and medical flights have appeared to decrease the public request for services. “This has delayed appropriate treatment in many cases and when treatment is finally sought, their condition has become life-threatening.”

“Long transport times have caused an epidemic loss of personnel because of job and family commitments. Volunteerism was already in serious decline nationwide. We have a critical need for personnel.”

Downing mentioned the need for “additional and sustainable funding, to augment our current revenue stream, and to allow critical improvements and growth in our frontier/rural communities.”

“This may be the most critical need that our towns currently face,” he said.

Tonopah officials last week said that they had not heard back from those sent the August letter.

The town and county leadership are looking toward the 2017 session of the Nevada Legislature in Carson City for help.

“The people who are above our head, who park in Carson City, they need to shoulder with us,” Vance Payne, Nye County emergency management director said during a recent Tonopah visit. “They need to be involved in this.”

“The only thing that gives me a little bit of peace out of this stuff is we’re not the only county going through this,” Payne added.

A major issue is that ambulance service is not mandated by law.

“So no one is required to provide it,” Downing said in public comments over the summer. “That needs to be changed.”

— The ambulance service in Tonopah could be among the topics addressed at an upcoming Tonopah Town Board workshop planned for 9 a.m., Friday, Oct. 14 at the Tonopah Convention Center. Check the Tonopah Times-Bonanza & Goldfield News for updates.