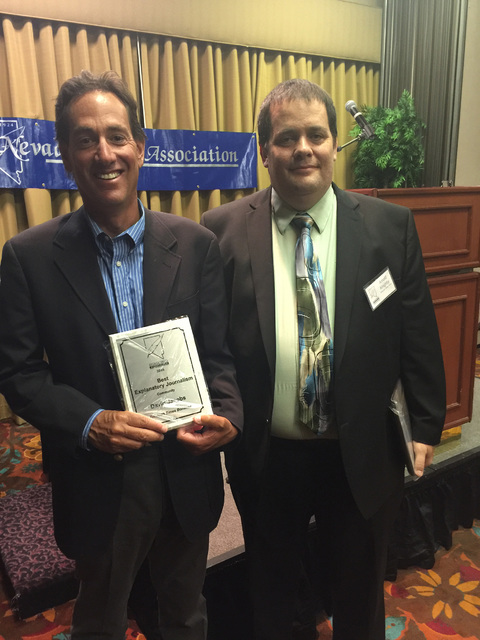 Reporter David Jacobs and editor Arnold Knightly after Jacobs won first place in the explanatory journalism category from the Nevada Press Association for coverage of a proposed Tonopah annexation this past March. Special to the Times-Bonanza & Goldfield News

The award, in the community category, was announced Sept. 24 at the association’s annual convention in Mesquite.

David Jacobs, reporter for the Times-Bonanza, won first place in the explanatory journalism category for coverage of a proposed Tonopah annexation this past March. Objections from rural residents halted the annexation that would have seen the town grow to 2,551 square miles. That annexation is separate from another proposed annexation currently before the Town Board.

“Jacobs is a gifted reporter who has jumped into the covering all aspects of regions,” editor Arnold Knightly said. “It needs to be said that he was only here for one month of the contest period. I look forward to working together for a long time.”

The newspaper also earned two other third place awards: one by former employee Nancy Whipperman for a photo of a worker covering the Nye Regional Medical Center sign with a blue tarp. The other was by ad designer Brandy Minnick for a black and white ad for the Tonopah Rotary Club.

The Pahrump Valley Times, a sister paper of the Times-Bonanza, won the General Excellence award for the first time in its history, which represents the highest award given, reflecting the best of the newspaper industry.

Arnold Knightly is editor of both the Times-Bonanza &Goldfield News and the Pahrump Valley Times.