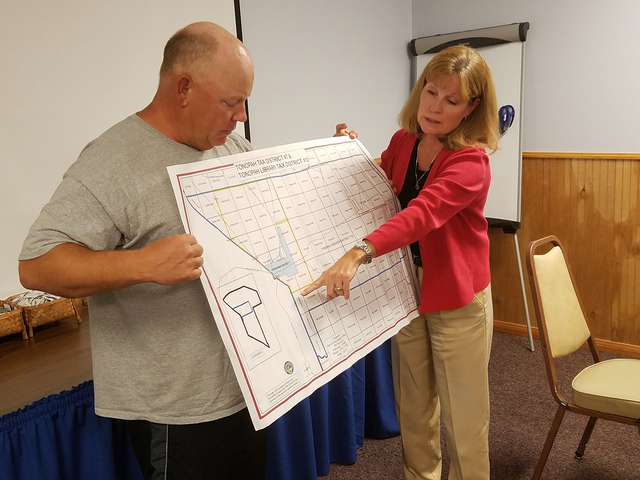 Tonopah Public Utilities Manager Joe Westerlund and town Administrative Manager Chris Mulkerns, as shown in this Sept. 14 photo at the town board meeting, hold a map showing the proposed annexation area. The town board is being presented with a plan that Nye County calculations show would see Tonopah grow from about 67 square miles to 583 square miles. David Jacobs/Times-Bonanza & Goldfield News

Six months after opposition from rural Nye County residents scuttled an annexation that would have made Tonopah the largest town in the continental U.S. for land size, the town is pursuing another sizeable annexation involving hundreds of square miles.

This time, the proposal to annex 516 square miles in Nye County is smaller than the 2,514-square-mile plan in March.

But if the new plan ultimately is approved, Tonopah’s land size would total more than eight times its current 67-square-mile size. That is based on numbers provided Sept. 15 by the county at the request of the Tonopah Times-Bonanza.

The 2010 U.S. census put Tonopah’s population at 2,478. Jacksonville, Florida is considered the largest community by land size in the continental U.S. at more than 840 square miles. Jacksonville has more than 821,000 residents.

As it prepares to formally consider the annexation proposal, the Tonopah Town Board voted 5-0 on Sept. 14 to set a public hearing. That hearing is planned for 7:10 p.m., Oct. 12, in the large room of the Tonopah Convention Center, 301 Brougher Ave.

Town staff said it did not immediately know the exact size of the latest proposal, referring questions to the Nye County Assessor’s Office.

In calculations provided to the Times-Bonanza, the assessor’s office said:

This proposed new area, the assessor’s office said, would extend from the current town of Tonopah boundaries:

The annexation proposal that was stopped in March would have seen Tonopah grow to 2,551 square miles. That would have made Tonopah by far the largest in the contiguous USA by land area.

Unlike the earlier plan, the current annexation proposal does not involve residential areas.

“There are no individual property owners,” Tonopah Administrative Manager Chris Mulkerns said in a brief interview after the meeting.

After the previous plan surfaced, residents expressed concern about their rural lifestyles being disrupted and stated that if they had wanted to live in Tonopah, they would have moved to town.

No organized opposition to the latest annexation proposal is emerging, though one concern was raised about how it would affect livestock grazing. The town, however, said nothing would change in newly-annexed areas.

The majority of parcels in the current proposed annexation area are owned by the U.S. Bureau of Land Management, Tonopah Solar Energy LLC, Liberty Molly LLC and patent mining claims among others, the assessor’s office said.

As with the old proposal, the current land already is part of the Tonopah Library District, which serves people beyond current town boundaries.

As with the previous proposal, the new plan is being linked to the newly-formed Northern Nye County Hospital District, which is aiming to bolster medical services in Tonopah. Tonopah’s only hospital, Nye Regional Medical Center, closed in August 2015, forcing those needing hospital care to travel more than 100 miles to Bishop, California or Hawthorne in Nevada’s Mineral County.

Starting in July 2015, Tonopah gave up 20 cents per $100 of assessed property valuation for the hospital district, reducing overall funds available to the town for other services.

By expanding Tonopah’s footprint, the town seeks to recoup those tax dollars, which earlier this year were calculated at $69,000 annually.

“We would like to make whole what we gave away for the hospital district,” said Mulkerns, the town official. “The same answers apply as the last time. The only thing that is changing are the boundaries. It is much smaller.”

Recouping the tax funds dedicated to the hospital district would help collect money to “bring things to Tonopah,” she said.

“Things people are asking for,” Mulkerns continued. “Playground equipment, and possibly something to help out the ambulance service. But those are all things that will have to be decided by the (town) board.”

Would Tonopah have to provide town services, such as from the fire department, to new areas if the annexation were to go through?

“There’s nobody there to provide services to, really,” Mulkerns responded.

“Nobody lives out there …There’s no businesses that have buildings or anything out there with the exception of SolarReserve’s Crescent Dunes Solar Energy Plant,” she said.

The solar plant is in the proposed annexation area, but it has its own service resources, officials have said.

A document, formally known as a memorandum of understanding, already exists between Tonopah and the solar plant.

“We would provide services to them if they asked for them if we were able at the time to provide services,” Mulkerns said. “That is what the (memorandum of understanding) states.”