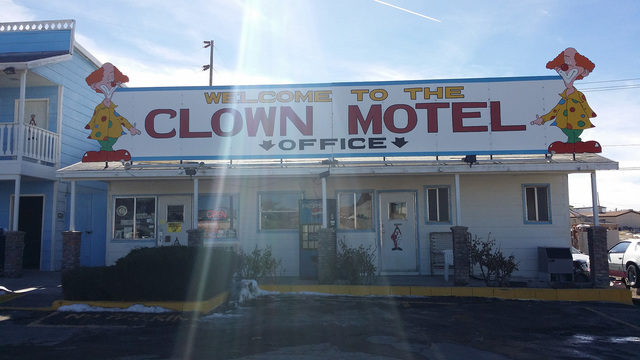 The Clown Motel in Tonopah as shown in 2016. The motel recently was publicized by a Detroit TV station. The story from Simple Most referenced the Tonopah landmark as “America’s Scariest Motel.” The story ran on the Detroit station’s website. David Jacobs/Times-Bonanza & Goldfield News

Tonopah’s Clown Motel is the recipient of national honors as 2017 gets underway.

The website Simple Most referenced the Tonopah landmark as “America’s Scariest Motel.”

“If you’ve ever wanted to never sleep again, have we got the place for you!” said the story publicized Jan. 12 on the WXYZ-TV Channel 7 website out of Detroit. “The Clown Motel in Tonopah, Nevada, is open for visitors looking for a thrill (or for people who just really like clowns? Do they exist?).”

The story, which included a series of photos of the motel, noted the Clown’s one-of-a-kind theme.

“The lobby is littered with clowns, including a life-sized clown sitting in a chair, cradling a number of smaller clown dolls in its lap. Oh, and every room is clown-themed: There are clowns on the doors and portraits of famous clowns (hi, Bozo!) hang on the walls.”

The story went on to trace Tonopah’s rich history as a mining town, a former “thriving metropolis of over 50,000” and the Clown’s location next to Tonopah’s historic old cemetery. “So if the clowns weren’t enough for you, here: Have some ghosts of miners and prospectors, too,” readers are told.

Clown Motel Owner Bob Perchetti said he had not read the article but had spoken with people who have.

“There’s been a lot of positive feedback about the motel, and it’s all been good,” Perchetti said. “It might be a creepy motel, but we have no evidence of any ghosts ever being seen here.”

“I think it’s a good deal,” Perchetti said of the publicity. “I think it will be a plus, instead of a minus.”

He noted that “Ghost Adventures” had checked out the motel about a year-and-a-half ago.

“They were here three-and-a-half days, and they set up cameras everywhere, and they never found any ghosts here,” Perchetti said. “I have never had anybody ever say they saw a ghost as far as from the different people who have come in here and written stories and stuff.”

“I think it’s going to kind of put us on the map … more so,” he added, referring to the story publicized on the internet by the Detroit TV station.

Perchetti noted that he’s had 29 rooms rented to construction workers over the past month.

“When they came in they said, ‘Hey, is this true that you have ghosts?’” he recalled. “I said, ‘No. We have not seen any.’ They all come in when they pay their rent every week, and they said, ‘We’re still looking for the first ghost.’ So they haven’t seen any ghosts.”