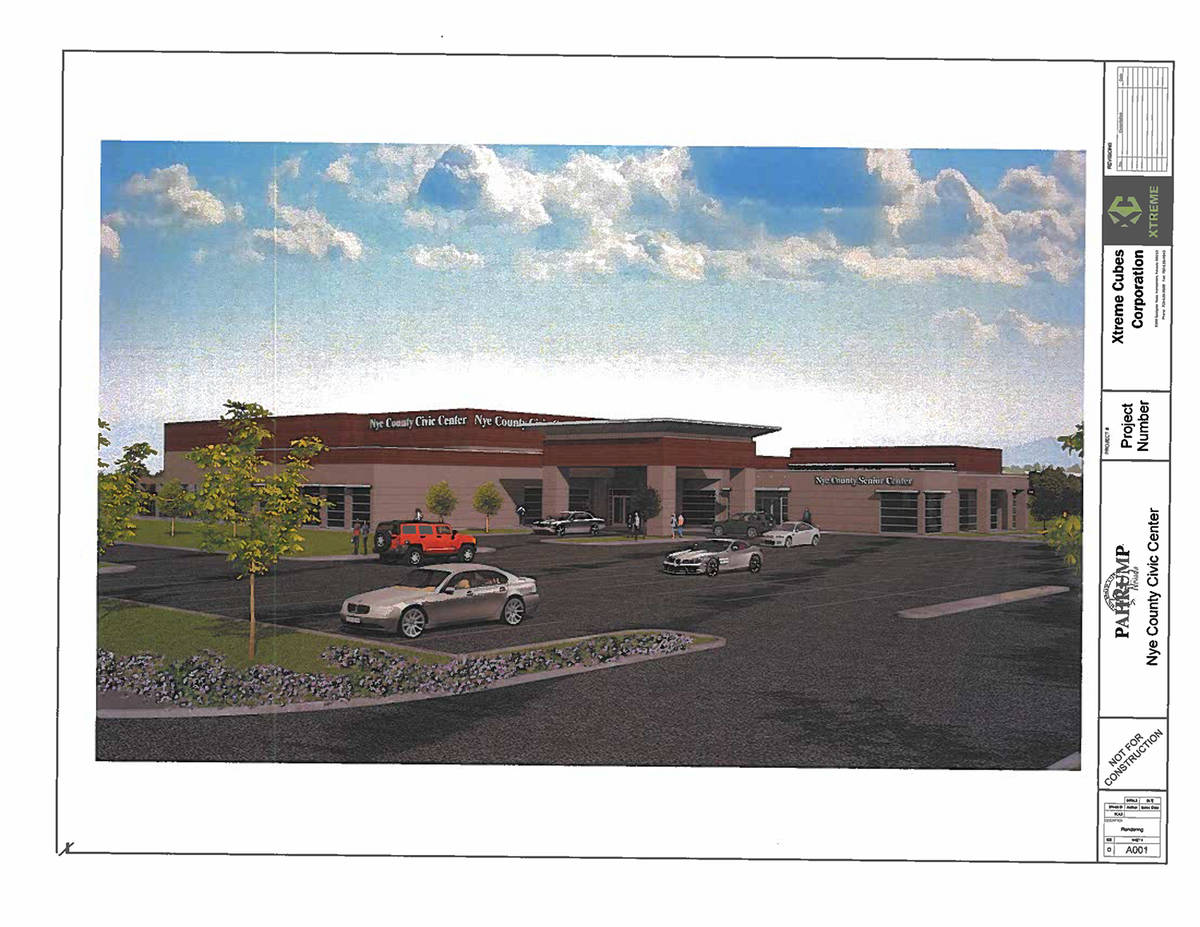 Special to the Pahrump Valley Times This rendering, included with the Nye County Commission's July 28 agenda, gives the public an idea of what the exterior of the proposed Nye County Civics Center looks like. 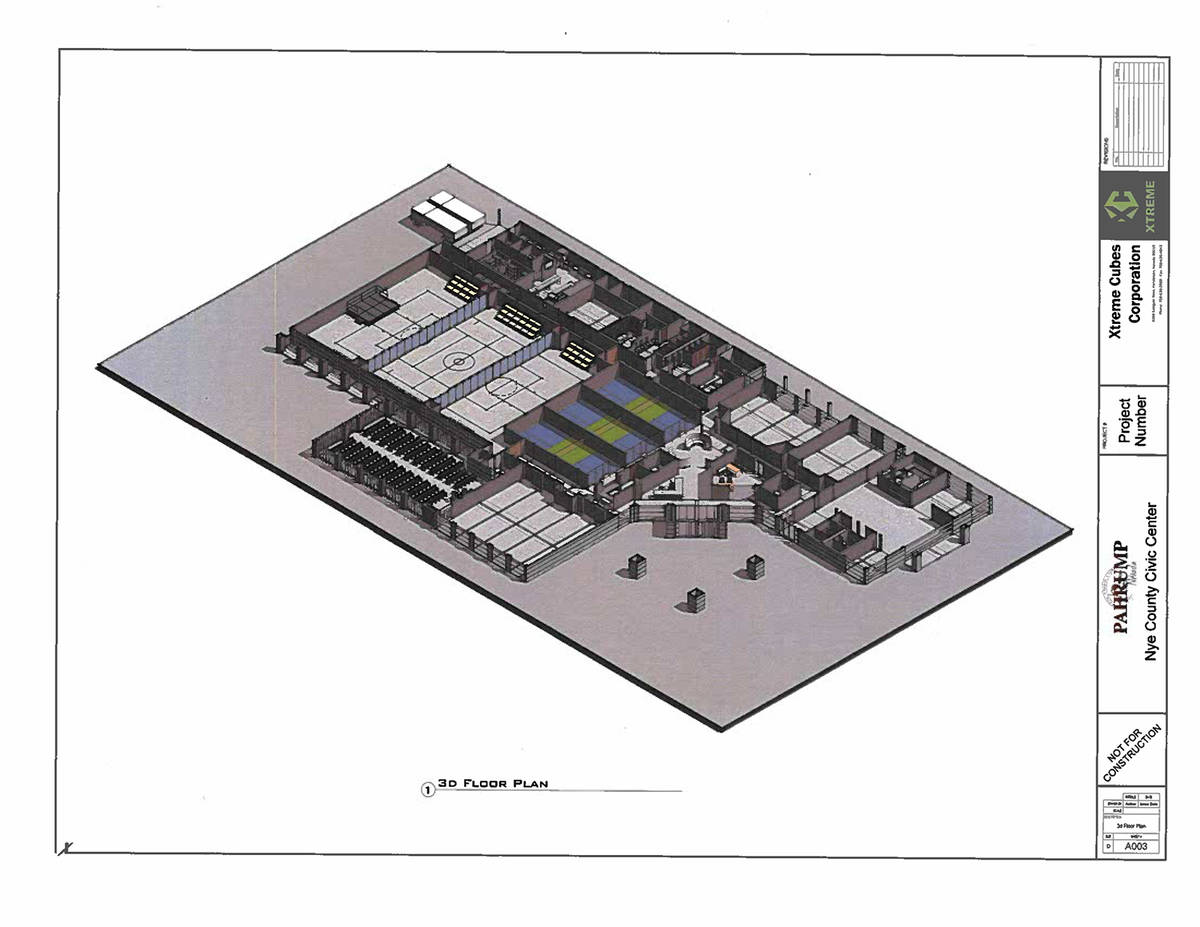 Special to the Pahrump Valley Times This 3D floor plan details what the interior of the proposed civics center would include. 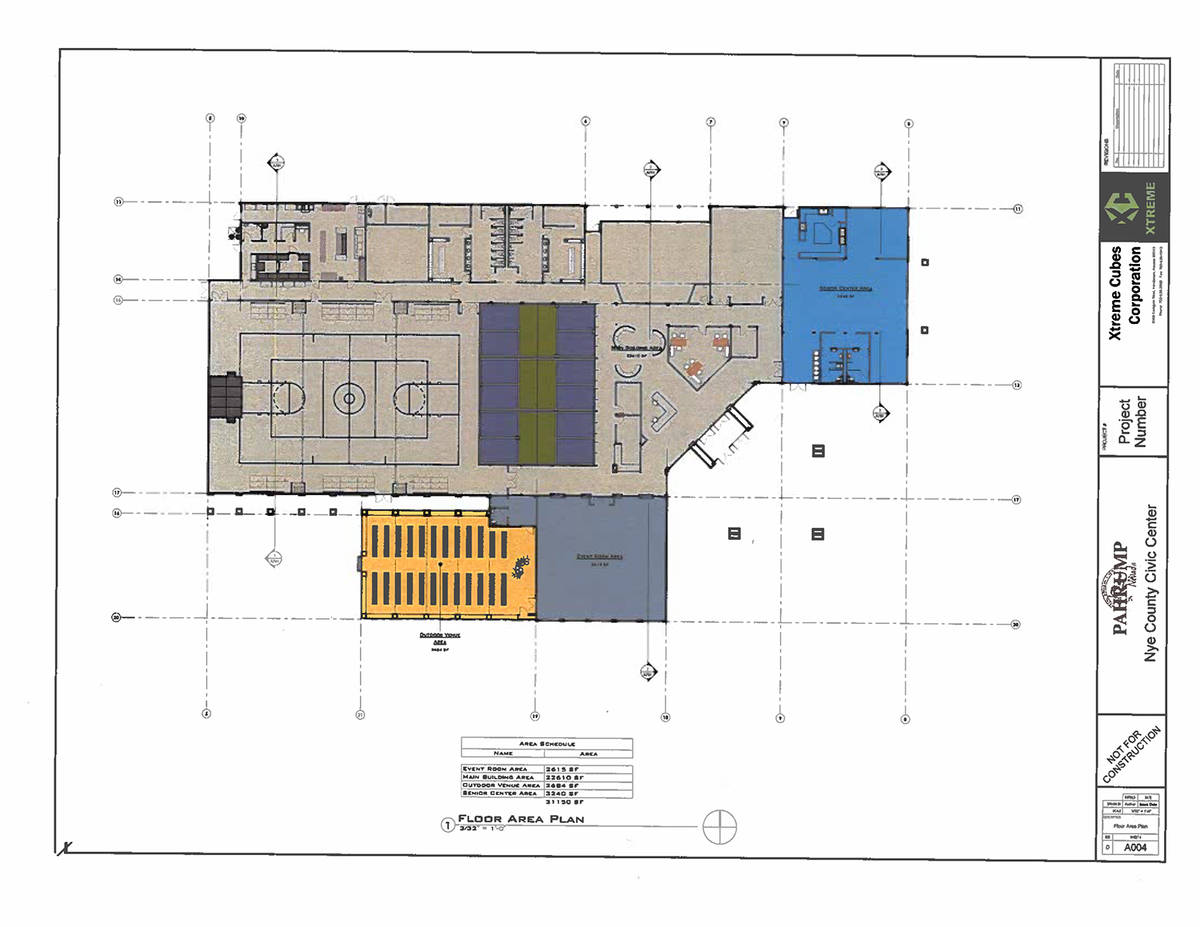 Special to the Pahrump Valley Times This floor area plan outlines the various zones within the proposed civics center, which is designed to be over 31,000 square feet.

In 2016, when Valley Electric Association was aiming to sell a 200-kilovolt transmission line and needed a vote of approval by its members in order to do so, one of the selling points for that sale was the promise that if it went through, VEA would donate $5 million toward the construction of a new community center. It may have taken nearly three years after the transmission sale was executed but VEA did finally make good on that promise, offering the $5 million donation to Nye County, with the Nye County Commission voting to accept it in September 2019.

In addition to the funds, VEA wished to donate a plot of land directly adjacent to its main campus in Pahrump but that idea was not something the county was interested in pursuing. Instead, the county set its sights on a piece of land that has been pegged for development for decades, the Pahrump Fairgrounds, and a presentation was given to the VEA Board of Directors in February of this year, outlining what the county would like that center to look like and contain.

As Nye County Manager Tim Sutton detailed, at that time VEA seemed pleased with the county’s proposals but the utility was unable to take any formal action to approve the project until its Aug. 6 deadline, which is right around the corner. With that in mind, Sutton said he wanted to present the same proposal to commissioners so they too would know precisely what the county is planning for the future community center, in preparation for the anticipated formal approval by VEA.

Sutton explained the reasoning behind the county’s desire to build the center on the fairgrounds, stating, “The initial offer was to do it on Valley Electric’s land. We had no need of that particular offer. Matter of fact, we felt that it was a little too small of a site to accommodate the facility that we’re looking at. Also, there has been quite a bit of momentum on the fairgrounds site and we wanted to capture that momentum and thought this project would be ideally suited for that property.”

As part of the process to decide what the community center should include, Sutton said he took in feedback from VEA’s former Legacy Committee and the public. There were many different ideas put forward and the county’s proposal assimilated several of them, resulting in a building that will be useful for all sorts of entertainment and activities.

“One of the centerpieces of this is a big, multi-purpose area that also doubles as a basketball court,” Sutton told commissioners, bringing up the 3-D floor plan included in the presentation. He noted that in the floor plan rendering, the large multi-purpose space appears to be much smaller, as it is dissected by two partitions. However, those accordion style, roll-out partitions can be slid back to create a much larger room. “So we have a great facility and it also has room for public seating. We have a little bit of a stage here so that you can do presentations, conferences, performing arts, things like that,” he stated.

The center also includes three dedicated racketball courts that Sutton said could double as volleyball courts and commissioner Debra Strickland added could be used for pickle ball too. There are various other rooms incorporated into the design, which could be utilized for a variety of purposes, including activities such as yoga and art classes, as well as a commercial kitchen and an outdoor pavilion with plenty of seating for a large gathering.

As proposed, the Nye County Civic Center, as the facility has been dubbed, would be situated near the already established Fireworks Shooter Site off Fox Avenue and Gamebird Road, an area that currently has it own parking lot constructed and sits next to land that has been selected for future sports fields as well.

This positioning was something Strickland was obviously enthusiastic about. She told her fellow commissioners, “You’ll see that the kitchen and bathrooms open up to those fields, so when you are eventing (sic), let’s say we decide we want to have a balloon festival, that whole facility is fenced in. You can charge event tickets for those who are putting on the event, so you get a wristband… and then they can have food vendor sales out of that facility. It also plugs right in to the parking lot that is preexisting, and between the parking lot and the fields that are all ready to go, it’s a pretty exciting project.”

While the design of the civic center may be fairly well determined, there are still various unknowns involved in the project. Sutton said first and foremost, the county must wait for VEA’s formal approval of the proposal. Following that approval, he will then need to find out whether the county is required to go out for a Request for Proposal to initiate the project and if so, an agenda item to approve that action will be forthcoming. The commission will also have to decide whether it will contract out the operations of the facility or operate the center itself.

“Obviously it will be up to the board if they want to have someone come in and operate the facility, similar to how we do the (Lakeview Executive) golf course, or we can keep it in-house as well. That will be something for a future board decision,” Sutton concluded.