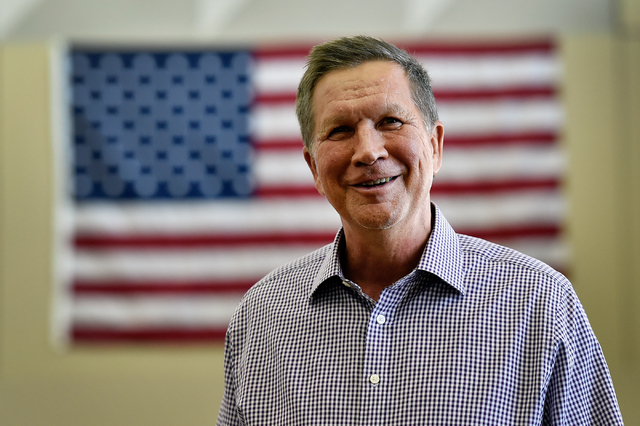 ‘‘I don’t think either party is answering people’s deepest concerns and needs,” Ohio Gov. John Kasich said in a Feb. 25 interview on ABC News’ “This Week.”

“I don’t think it’s going to happen tomorrow but I think over time do not be surprised if these millennials and these Gen Xers begin to say, ‘Neither party works, we want something new.’”

The idea smacks of special pleading by Kasich, who ran a lackluster campaign for the Republican Party’s 2016 presidential nomination and got sent home by his party’s primary voters in favor of Donald Trump. His supporters (with no discernible discouragement from him) are talking him up as a possible 2020 candidate on a third party ticket.

Maybe not tomorrow, governor Kasich — and certainly not yesterday.

In 2014, Kasich and Ohio’s Secretary of State Jon Husted, actively conspired to deny Ohioans third choices — Libertarian Party nominee Charlie Earl for governor and Steve Linnaberry for attorney general — accepting an illegal $250,000 in-kind donation from a GOP activist in the form of attorney bills for legal action to remove Earl and Linnaberry from the ballot.

The only reason John Kasich suddenly thinks fondly of third parties is because he fell short of his own party’s top slot. Back when he thought the sky was the limit for himself, he couldn’t stand the idea. Sore loser much?

He may be right that a third party is coming, but not for the reasons he wants one. He’s enamored of the notion that what Americans REALLY want in a political candidate is a “centrist” like John Kasich, Mitt Romney, or John McCain, or, for that matter, Hillary Clinton. In other words, a candidate like those who keep losing presidential elections.

The winners of recent elections have been candidates who moved away from the center — ever so slightly in a “progressive” direction like Barack Obama in 2008, or falsely but loudly in a “populist” direction like the Tea Party’s 2010 congressional class or Donald Trump in 2016.

The problem with the major parties is not that they’re not “centrist” enough, it’s that their candidates run as something different and then move to the center after they win.

Americans clearly want change, not the same old stuff in louder packaging. We don’t agree on what kind of change, but it’s obvious to most of us that something just isn’t working.

There’s already a third American political party, based on ideas that work every time they’re tried. It’s the party Kasich did his damnedest to hide from the voters of Ohio: The Libertarian Party.

There are other third parties, too, if freedom isn’t your touchstone. The Green Party. The Constitution Party. The oldest third party in existence, the Prohibition Party.

But they’re not the kind of third parties John Kasich has in mind. They’re parties whose supporters want to actually take America in new directions. John Kasich wants to paint a racing stripe on his broke-down ideas and sell us a jalopy with four flat tires and no engine as something “new.”