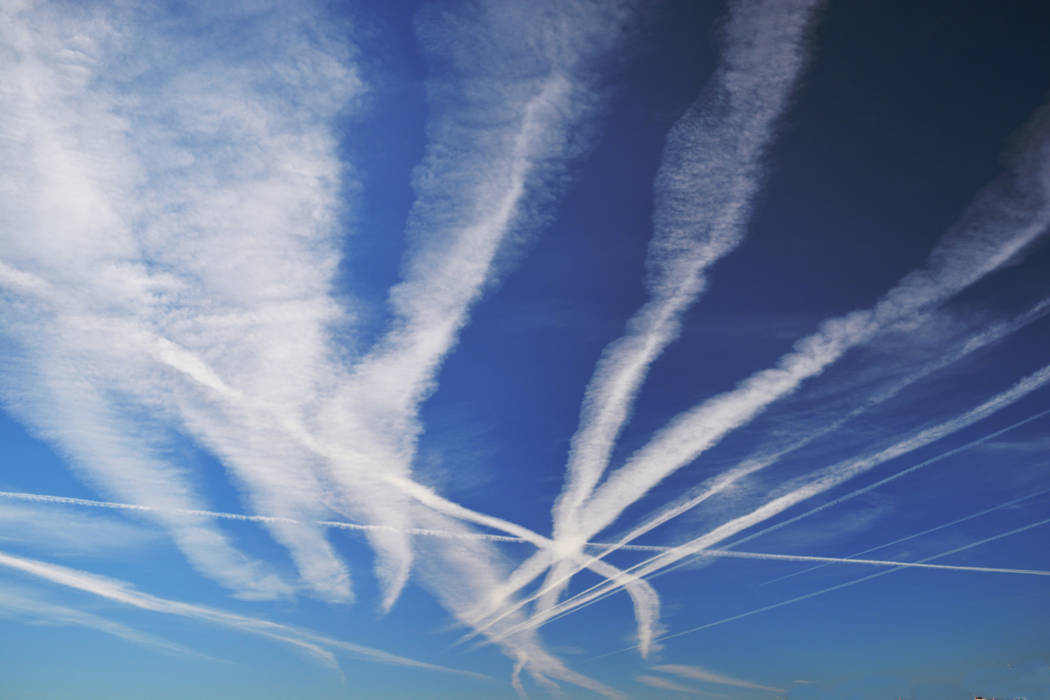 Conspiracy theories are a popular item of discussion here in Nye County.

Maybe it’s because we live in an area that has some very interesting things that the government doesn’t tell us much about. That cloak of secrecy and the corresponding lack of information leaves a void. We don’t really like voids, so we tend to fill them in with our own opinions of what is taking place.

Conspiracy theories are not unique to Nye County and Pahrump. The theories are often bantered about on late-night talk radio. Nationally, some of the most popular conspiracy theories are: there is a secret group controlling the world, Obama is not a U.S. citizen, 9/11 was an inside job, the moon landing was faked, the FDA is withholding the cure for cancer, and that the government is controlling chemtrails.

That last theory seems quite popular here. Perhaps its because we have many cloud-free days that let us see more of what is taking place overhead in our sky. Besides Pahrump, there are other parts of Nevada that are well suited to see the vapor trails left by jet engine powered planes.

On Highway 50 just west of Fallon, the curve of the earth and the corresponding angle of the horizon allow someone looking due west to see over the Sierra Nevada mountains and into the flight pattern space over central California. Even though the flights are a couple of hundred miles away, at around sunset you can see dozens of vapor trails aligned in a north-south direction.

The conspiracy theory is that chemtrails are chemical-laden vapor trails dispersed throughout the sky by covert government operatives. Theorists believe the United States is committing biowarfare on its citizens.

The theory has gained more momentum in recent years as the public learns more about proposals for geoengineering: the concept of intentional, global manipulation of environmental processes to try to curb the effects of global warming.

Part of the problem is that the U.S. government and scientists have a long history of lying to the public about dangerous chemicals and performing secret experimentation, so a healthy skepticism of what Uncle Sam tells you is harmless is not necessarily a bad thing.

There is a scientific explanation of chemtrails. Chemtrails are actually contrails. Contrails are produced by jet fuel, which is a form of hydrocarbons. As the hydrogen burns, it oxidizes to form water, and when you burn carbon it forms carbon dioxide. What you’re seeing is water vapor, much of which came out of the back of the engine and then condensed into an artificial cloud.

Planes traveling at lower altitudes, below 26,000 feet, typically can’t produce contrails because the surrounding air isn’t cold enough. Therefore, we sometimes see trails behind planes, sometimes we don’t, and sometimes we notice that they vanish soon after appearing. Conspiracy theorists claim this is evidence of a spraying program, but scientifically it is evidence that air varies based on altitude and geography.

Whenever a conspiracy theory like this is presented to me, I like to apply capitalist principles to if it makes any sort of economic sense. In other words, “show me the money!” Most airplane traffic in our skies is for commercial aviation by publicly traded companies. Those publicly traded companies are beholden to stockholders to make a profit. Profits are made by controlling costs and charging consumers as much as the competitive market allows for seats.

A major component of their cost is fuel. Airlines are pushing for more passengers per plane and more fuel-efficient engines. In addition to how efficient the plane and its engines are, the total weight of the plane is a major factor in fuel efficiency.

Airlines are trying to shed pounds; I have a hard time imagining airlines participating in a program that forces them to carry extra weight in chemicals. The government would have to be paying them for that and I don’t think it’s plausible that it could be kept secret since these companies must make their financial reports open to stockholders. It would require the cooperation of tens of thousands of people in the airline industry.

A more relevant concern regarding contrails is the amount of pollution that airplanes discharge vs. other forms of transportation. Air travel is expanding rapidly, therefore more attention needs to be given to greenhouse emissions and the effect that jet fuel exhaust and contrails may have on the environment. Perhaps late-night talk radio will turn its attention those concerns!