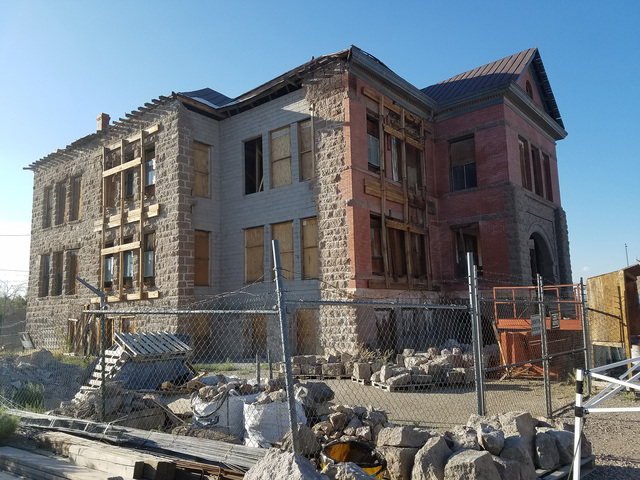 Goldfield High School as shown in an Aug. 5 photo. Efforts continue to restore the historic building that would be used as a community and cultural center. It also would serve as an interpretive or museum center to preserve the history of Goldfield and surrounding areas. David Jacobs/Times-Bonanza & Goldfield News 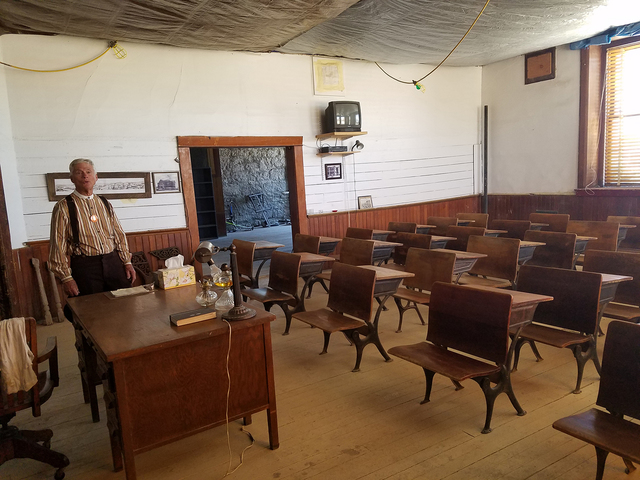 John Ekman, president of the Goldfield Historical Society, is shown inside Goldfield High School in this Aug. 6 photo. The desks show in this photo were donated by the Fourth Ward School Museum in Virginia City. David Jacobs/Times-Bonanza & Goldfield News

John Ekman, president of the Goldfield Historical Society, is shown inside Goldfield High School in this Aug. 6 photo. The desks show in this photo were donated by the Fourth Ward School Museum in Virginia City. David Jacobs/Times-Bonanza & Goldfield News 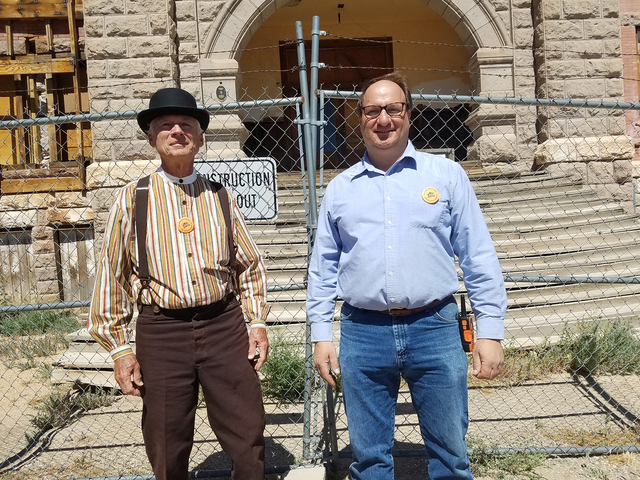 John Ekman, left, and Dominic Pappalardo, business owner and former Esmarelda County commissioner, are helping lead efforts to restore Goldfield High School. $200,000 has been estimated to have been spent on the project to date. David Jacobs/Times-Bonanza & Goldfield News

Bolstered by community support, efforts continue to bring new life to the former Goldfield High School building, the historic structure in the heart of the Esmeralda County community.

Visitors received the opportunity to tour the building during the recent Goldfield Days celebration.

“The end goal is to restore it for reuse as a community and cultural center and interpretive or museum center to preserve the history of Goldfield and these surrounding areas,” said John Ekman, president of the Goldfield Historical Society.

“When it’s done, hopefully we’ll be able to use it for meeting rooms, for exhibits, for artworks, for plays,” he said.

“There’s a large auditorium up there for community use. And also we’ll have certain areas in which we display the artifacts and the history of Goldfield.”

Ekman estimated the timeline for the restoration at about 10 years.

Temporary stabilization efforts have been completed, including on walling that had collapsed.

“Now we are at the point where we are doing permanent restoration,” Ekman said.

Foundation work is complete, an inner wall was rebuilt in concrete block, and work started on an outer wall.

“You can see the first floor is done to the start of the windows,” Ekman said as he stood outside the building. “That will be done in the original stone.”

Dominic Pappalardo, president of the Nevada nonprofit Goldfield High School Museum, is pleased with the progress.

“It’s wonderful,” he said. “It’s been a long time coming, but it’s absolutely beautiful. We are very happy that the building has finally been stabilized. The structural wall that was missing is now in place.”

“The entire exterior has been tuck-pointed so the building has been stabilized in a significant way,” Pappalardo added. “We are extremely happy for that.”

Ekman credits Pappalardo as a former owner of the high school building.

“He, with his own funds and his own materials, went in and put in temporary bracing,” Ekman said. “It was no mean feat. There’s a tremendous amount of temporary bracing in there because the wall had collapsed.”

“He put a lot of his time and energy and sweat and funds into that building,” Ekman said. “He has to be thanked for saving it so that we could continue the work.”

How much money is needed to complete the project?

“The amount of funds is a little indeterminate because with an old building, you’re not sure what you’re going to get into,” Ekman said.

“Sometimes you think it’s better than it is,” he said, referring to a building’s condition.

“In order to complete the structure, I’d say $2 million,” Ekman estimated. “But beyond that, in order to get the interior in a position where you can do all the things you’re going to do, it could be another $1 million.”

About $200,000 has been put into the building so far, including some of the major structural work.

“So I would say we are about 75 percent done with the structure,” Ekman said. “Then we replace this roof with a new roof, and then we’ll be able to start on the interior.”

“The interior is a really pretty interior because it has a central stairwell,” he continued. “It’ll just be an outstanding asset for this community, for Esmeralda County and for Nevada.”

A classroom’s already been set aside to recreate an earlier look.

“You will have a classroom very much like it would have been in 1908,” Ekman said.

“We were lucky enough to get 32 early school desks donated by the Fourth Ward School Museum in Virginia City,” Ekman said.

The desks are now in a northeast classroom of Goldfield High School.

“We cleaned up the classroom and placed the desks in there, and then we repaired the broken windows, which were blown out by a dynamite blast they had here two or three years ago,” he said. “Then we had the original Venetian blinds, which were identical to the ones used in the courthouse. We had five of those cleaned.”

The overall restoration project is moving at a pace allowed by available funding, Ekman said.

A special trust fund is in place for the restoration efforts.

“Every cent that we get in donations, both public and private, is spent on that school,” Ekman said. “We are all volunteers. We don’t take a dime of it.”

“We really could use as much funding as we could get so we get this building back in the condition it needs to be for future generations.”

■ To donate to the Goldfield High School restoration efforts, go to goldfieldhistoricalsociety.com