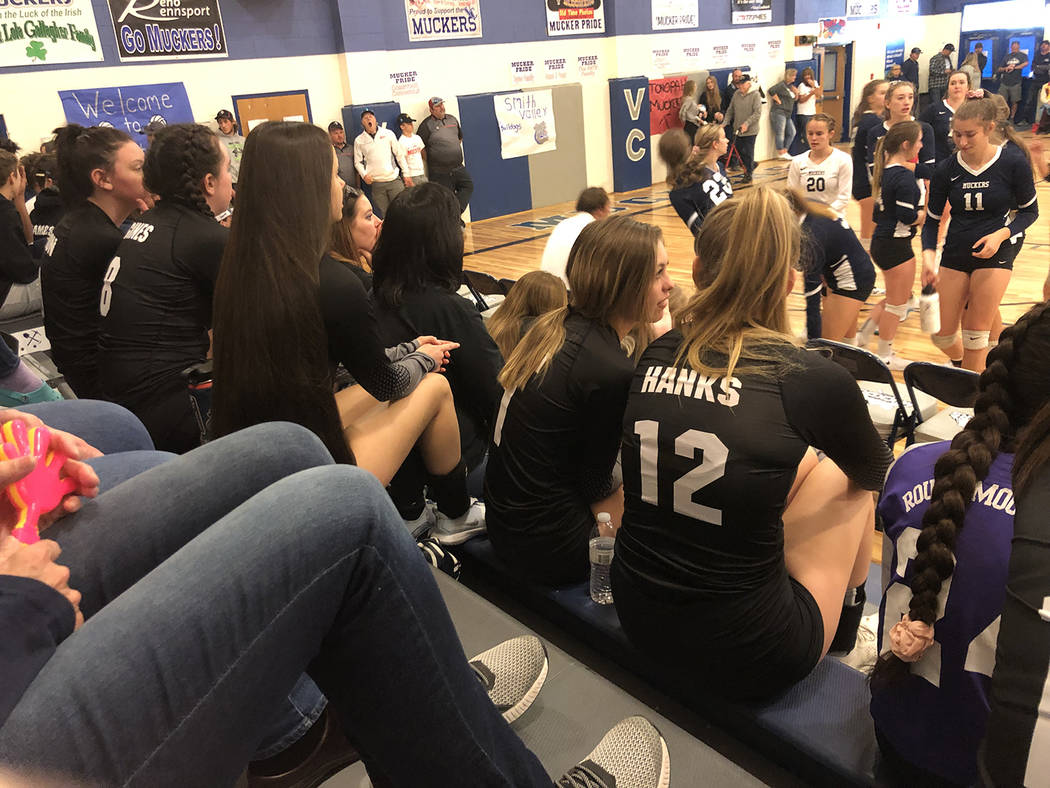 Tom Rysinski/Times-Bonanza & Goldfield News Round Mountain High School players and coaches gather in the bleachers to watch Tonopah battle Virginia City in the Class 1A Region I semifinals. Round Mountain met Smith Valley in the second semifinal match. 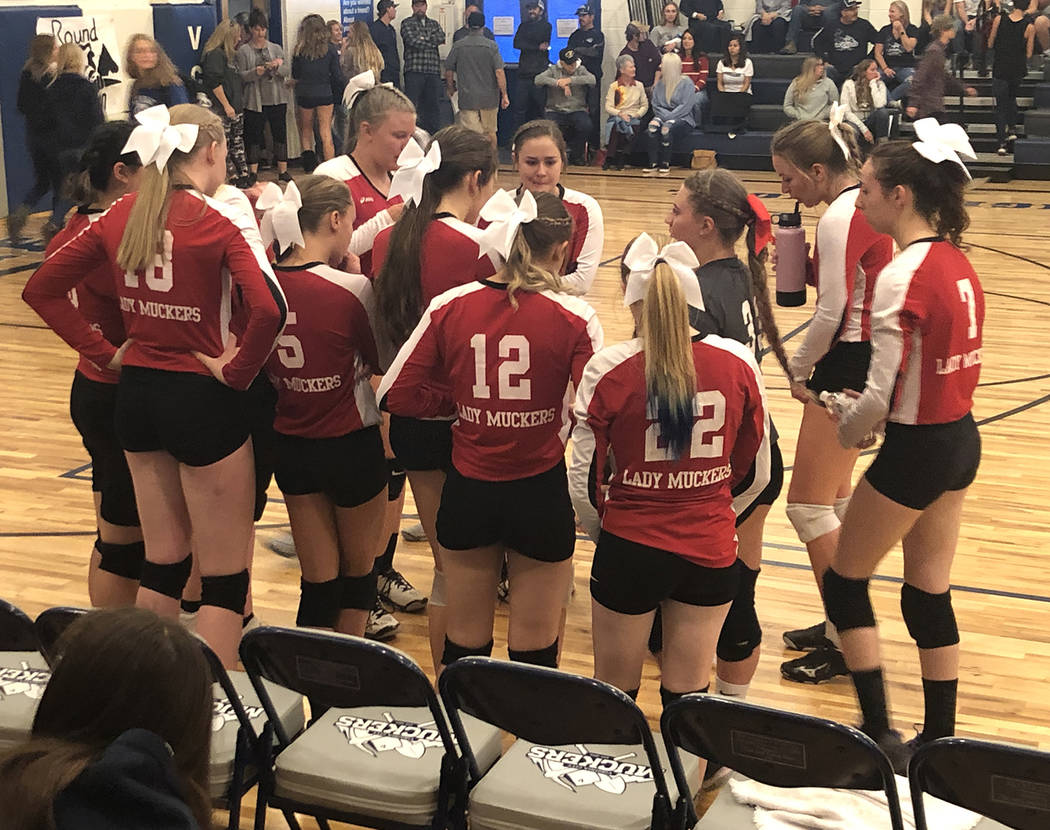 Tom Rysinski/Times-Bonanza & Goldfield News Tonopah High School volleyball players during a timeout of their Class 1A Region I semifinal match against Virginia City on Saturday. The Muckers defeated Sage Ridge and lost to Virginia City in the region tournament. 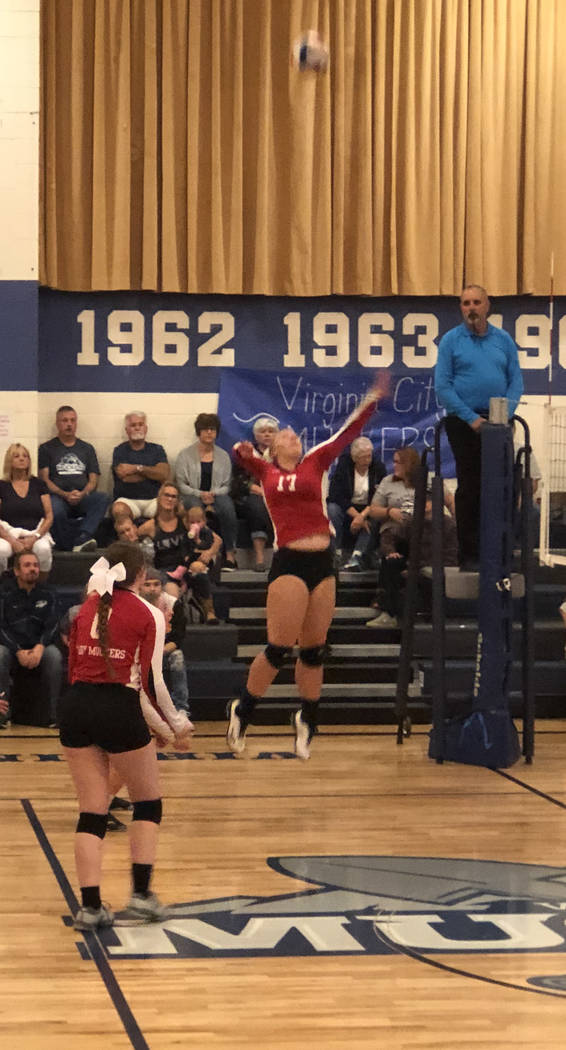 Anna Berg does not like to lose any more than other coaches, but it was hard to find bad things to say about her Round Mountain High School volleyball team Saturday after the Knights were eliminated from the Region I Tournament by Smith Valley.

So when Smith Valley completed a 25-17, 25-19, 25-9 win over the Knights on Saturday at Virginia City High School, Berg put it in perspective.

“We’re pretty young,” said Berg, whose team will lose four seniors. “As a whole team we’re young, and it’s our first year together. We’re not quite up-tempo yet, there are a lot of things we need to work on. And we did lose to Smith Valley earlier in the year, and that was something they probably had in the back of their minds.”

The Knights, the No. 3 seed out of the Central, started well, and when sophomore Gia Nelson’s ace gave them an early 2-0 lead in the first set, fans of the other teams in the gym for the regional started to get behind Round Mountain. While most of the points came on errors, the Knights built an 11-6 lead before the Bulldogs got untracked.

In the second, Smith Valley opened up an early lead and built it to 20-9 before Round Mountain put things together. The Knights, behind steady serving from McKayla Brown, won six consecutive points and pulled to within 23-20 before the Bulldogs closed out the set.

The third set was another matter, with the Bulldogs opening up leads of 5-1 and 16-5 before cruising to a 25-9 win. But for a coach in her first year back with the team, implementing a system new to everyone when the season started, the groundwork has been laid.

“It’s amazing how far they’ve come from the beginning of the year until now, and when we start out next year we won’t have to re-learn everything that we learned this year,” Berg said. “We can start off where we left off, more up-tempo, faster sets, knowing where they are on the court more, those types of things.”

Berg had high praise for Brown, a senior whom she said holds the team together, and for Brooklyn Hanks, who is only a sophomore.

“Brooklyn Hanks really stepped up for us,” Berg said. “She used to not play defense at all, but she has become a very good passer and we hardly ever sub her out.”

The Knights reached the semifinals by defeating Sierra Lutheran in four sets on Friday, dropping the first.

“They played together,” Berg said. “They were in sync last night. They served well, and they covered well. I think they were just ready to come here and play some volleyball, and we’re happy because we upset the number-two team. I don’t think that they thought we would beat them, and they did. They just were on last night.”

Muckers fall one shy of state

On the same day that the Knights were coming up just short of reaching the Class 1A State Tournament, Tonopah was doing the same thing. The Muckers faced the host school in the other semifinal match, with Virginia City taking a 25-16, 25-17, 21-25, 25-22 decision.

It was the second consecutive season the Muckers lost to the eventual champion in the semifinal round, as they fell to Pahranagat Valley in a thrilling five-setter last year in Tonopah.

Tonopah dug a hole for itself in the first set, falling behind 9-2 after a nice block by Virginia City’s Hailey Lattin. After that, neither team established momentum, but the home team didn’t have to and settled for a 25-16 win.

The second set was a bit different as Tonopah played well for much of the period. Sophomore Hannah Dowers and senior Mandy Katzenbach were sharp, and a kill from sophomore Lilah Swanson made it 14-13 Virginia City.

But from there, not much went right for Tonopah, as 14-13 quickly became 22-15. Even the ball hitting one of the large wooden beams in the ceiling didn’t slow down Virginia City at the end of the 25-17 set.

After those two sets, it would not have been surprising for Virginia City to polish off Tonopah and move on to the final. But the Muckers shook off an early deficit in the third and took a 10-9 lead on a kill by Swanson. The set stayed close, with neither team leading by more than two until Tonopah went on a late roll.

Dowers gave Virginia City fits with her serve, and a Katzenbach block put the Muckers close to extending the match. A service return error slowed them for a bit, but on set point Virginia City’s Katie Chandler sent a serve over the volleyball court and past the baseline of the basketball court to keep Tonopah alive.

Virginia City opened a 13-6 lead in the fourth, but the Muckers stormed back. With Chanlei Philips serving eight consecutive points and Swanson and Jessica Callaway making key plays at the net, the Muckers tied the set. They tied it again at 21-21 on Dowers’ kill just inside the back line, but the Bulldogs held on for a 25-22 win.

“My two sophomores, Lilah Sawnson and Hannah Dowers, both played outstanding,” Tonopah coach Melissa Jennings said. “Hannah’s so tall she can see things other people can’t see. Allee Thompson had a few mistakes in the beginning, but she really came back until she got that bloody nose and had to be taken out.