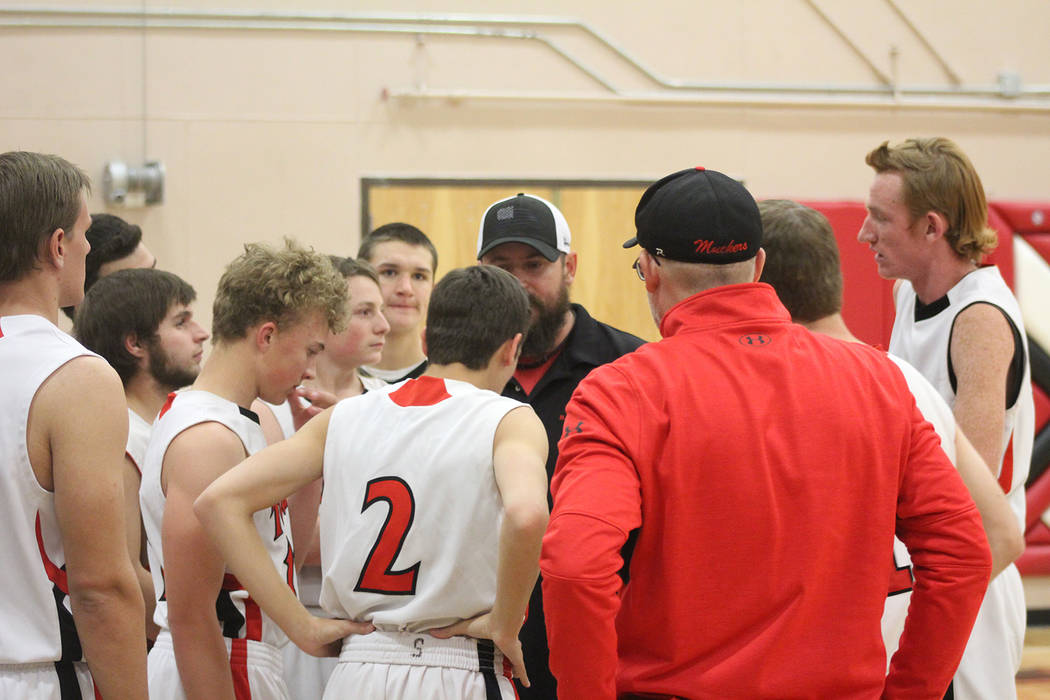 Going 1-4 in the tournament did not discourage Knights coach Jerry Storts, partly because his team was playing without a full roster, as he said three players did not make the trip because of school infractions.

“Overall, our kids played well,” Storts said. “As did many of the teams, we had difficulty putting the ball in the basket.”

Alstatt scored in double figures in all five games, including 24 points against Jackpot in a game that he made 5 of 6 free throws and shared the team lead in rebounds with Diego Rodriguez with nine. Alstatt, who took more than one-third of the team’s shots during the tournament, averaged 17.6 points and 10.2 rebounds while shooting 40 percent from the floor.

Whittell outscored Round Mountain 18-0 during the fourth quarter to turn a convincing victory into a rout. In that game, Alstatt shot just 6 of 22 while the rest of the team managed to make just 4 of 30 shots from the floor. That pattern repeated in the second game, against Jackpot, when Alstatt had his best scoring game while the rest of the team shot just 6 of 42 from the floor and 0 of 8 from the line.

The Knights struggled again against Owyhee, as Alstatt scored 19 of the Knights’ 30 points and had 8 of their 11 field goals.

But things were better in Saturday’s games, with junior Bayek Davis netting 10 points and Rodriguez adding 7 against Eureka, while sophomore Koleby Harmon chipped in with 3 assists. The win over Carlin saw Round Mountain have three players in double figures, with Harmon scoring 13 points and junior Colter Jensen adding 10. Alstatt had more help on the boards as well; he pulled down 10 but his teammates grabbed 17, including 6 from Jensen.

The way the short-handed Knights closed the tournament has Storts eager to see what else his team can do.

“We are looking forward to the season,” he said. “It is our belief we are further ahead this year than last year and look forward to opening our league season.”

Tonopah also opened its season at the WREC Tournament and fared slightly better than Round Mountain, winning twice at Carlin. The Muckers, with only one returning starter in Jesus Martinez, opened with a 74-26 loss to Wells and a 33-24 loss to Eureka, then defeated Lund 49-47 and Carlin 59-39 before wrapping up the event with a 56-25 loss to Whittell.

Although there are four seniors on the Tonopah roster, Martinez is the only one with any varsity experience. Three juniors, three sophomores and a freshman round out the team.

“For the inexperienced team that we have, I feel like they didn’t do too bad,” Muckers coach Adam Siri said. “There is still a lot that they have to learn.”

Siri said senior Joel Jones played hard on both ends of the floor before injuring his knee and missing the Whittell game. And he is optimistic about junior point guard Joey DiMaggio, whom Siri said is improving game by game.

“It was a good learning experience, and we look to improve more and more throughout the season,” Siri said.

Round Mountain’s girls also went 2-3 at the WREC Tournament, although the Knights did it by winning their second and last games.

Senior Mckayla Brown averaged 13.4 points for the five games to lead the Knights, netting 9 of the team’s 10 3-point shots and shooting a team-leading 36 percent from the floor. Brown also leads the team with 9 assists.

Freshman Kellee Berg and sophomore Brooklyn Hanks each are averaging roughly 7 points per game, with Hanks netting 14 during a 42-36 loss to Whittell and Brown matching that in a 45-23 win over Jackpot.

Brown shot 4 of 5 from 3-point range and finished with 16 points in a 56-36 loss to Owyhee, a game in which the Knights shot just 18 percent (9 of 50) from inside the arc. Brown had another strong game in a 43-32 loss to Eureka, finishing with 21 points while Berg led the team with 8 rebounds.

In the finale against the host Railroaders, the Knights broke out to leads of 10-2 after one quarter and 17-3 at halftime and coasted to a 39-18 win behind 11 points from Berg and 10 points from Brown.

Tonopah was particularly unkind to the host school, outscoring the Railroaders 10-0 during the second quarter and 20-2 during the fourth. Against the Vandals, the Muckers led 15-14 before being outscored in each quarter the rest of the way, while the opposite was true against Wendover, as the Wildcats jumped out to a 27-10 halftime to lead.