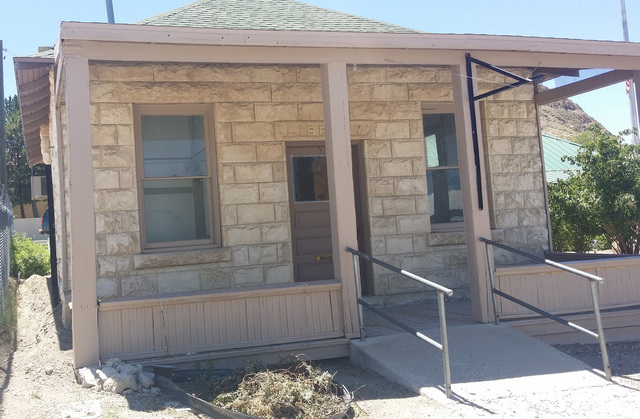 A look at Tonopah's historic old library as shown in a July photo. Volunteer efforts are underway to restore the building that's been used for storage since 2000 when a new library opened next door. David Jacobs/Times-Bonanza & Goldfield News 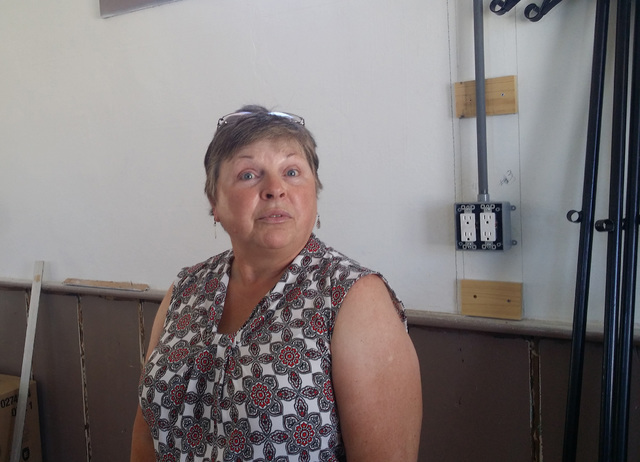 Dianne Ryals, Tonopah library director, discussing the planned work in the old library that will convert the building be used as a business office and research center. David Jacobs/Times-Bonanza & Goldfield News

TONOPAH – A part of Tonopah’s historic past is coming back to life, bringing back memories for longtime community members.

The town’s 111-year-old library, which closed when a new one opened about 16 years ago, is being renovated so that it can open again as a business office and research center.

“That is the goal,” said Dianne Ryals, Tonopah library director. “To let people use it again. Have it open to the public so that we use it, instead of just letting it sit there falling apart.”

Schoolhouse-period lighting is planned, as well, along with heating and air conditioning.

The building off Central Street has been on the National Register of Historic Places since 1982.

“We’re just trying to keep it as original as it can be and still be used,” Ryals said. “It looks crazy now, but it really will look good.”

“If you see all of the hard work they have done on their own time and the volunteer time, it’s amazing what they’re doing,” said Donna Galli, a Tonopah resident for 37 years.

“It’s a historical building so it’s keeping it in our town, keeping it in good shape so it doesn’t fall down,” she said. “Then we’ll be able to use it.”

Work started a while back but stopped due to a key volunteer’s injury.

“It is going well,” Ryals said of the renovations. “We are about to start working on it again. We had some setbacks. We hope to get it finished soon.”

Plans call for the old library, immediately adjacent to the new one, to be used as a business office and research center.

“We are hoping to put all of our research materials out in the old building,” Ryals said. “We’ll set it up with a computer so that if folks need to use it for business meetings or whatever, they can use it for that.”

The old library, known to generations of Tonopah-area residents, dates back to 1905.

About 800 square feet, the old library’s service ended in 2000 when the modern Tonopah Public Library debuted next door.

“When you get something new, you sort forget the old stuff,” Ryals said. “But it’s going to be nice. It’s going to be a nice addition. We’ll be able to spread out in here (new library) a little bit more.”

In recent years, the old library had been used for storage, housing old books, shelving and old computers.

It took a couple of weeks to clear out so that renovations could begin. That included an old book sale last year, which raised money for the library.

“Anything old was out here,” Ryals said during a recent tour of the historic structure.

Through volunteer efforts, the only cost to revive the old library is the building materials.

She is pleased with how the work is unfolding. “The flooring is perfect. It’s beautiful wood floors. They’ve already been scrubbed. They’re ready to have a stain put on them, but I’m waiting to get everything else done before I get that done.”

Ryals said other work has been done by the group of volunteers.

The old library also will be available for meeting space.

“I have people all the time call from Vegas and say, ‘Do you have a civic room in your library that we use for the day?’ We don’t,” Ryals said.

The idea of reopening the library dates back seven or eight years.

When Ryals arrived in town a few years ago, the effort gained momentum and two advocates/volunteers: Ryals and her husband Gene.

He injured a thumb while volunteering on the project, Dianna Ryals said, putting the effort on temporary hold until the injury healed.

“Me and my husband and have done most of it,” Ryals said. Two town employees helped with the porch while a conservation crew did priming/outdoor painting work.

Galli, the longtime Tonopah resident, said the old library offers “a lot of history and a lot memories.”

“These people (volunteer) worked very hard to get this done. I can’t wait to go in and see it after it’s done and enjoy it.”

■ Check the Tonopah Times-Bonanza & Goldfield News for updates on this story.