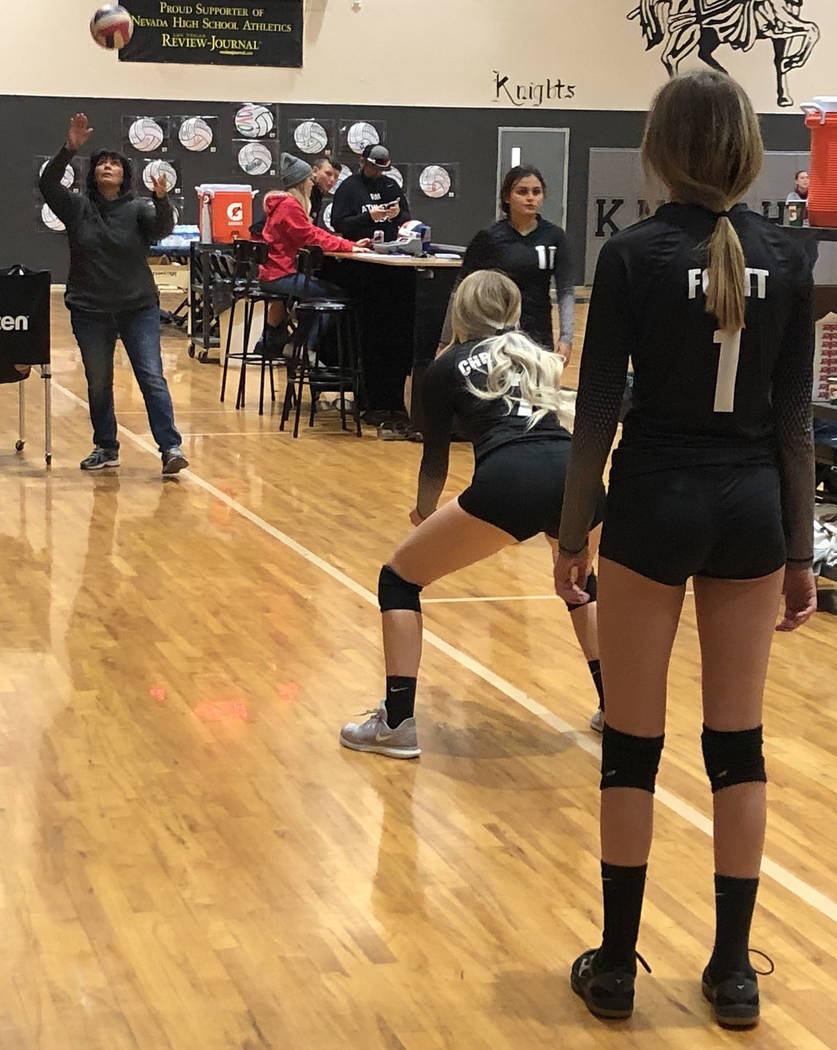 Tom Rysinski/Times-Bonanza & Goldfield News Round Mountain girls volleyball coach Anna Berg runs drills before the Knights' match against Sierra Sage/Rite of Passage on Saturday in Round Mountain. The Knights won 25-9, 25-14, 25-11 to finish Class 1A Central League play at 4-2. 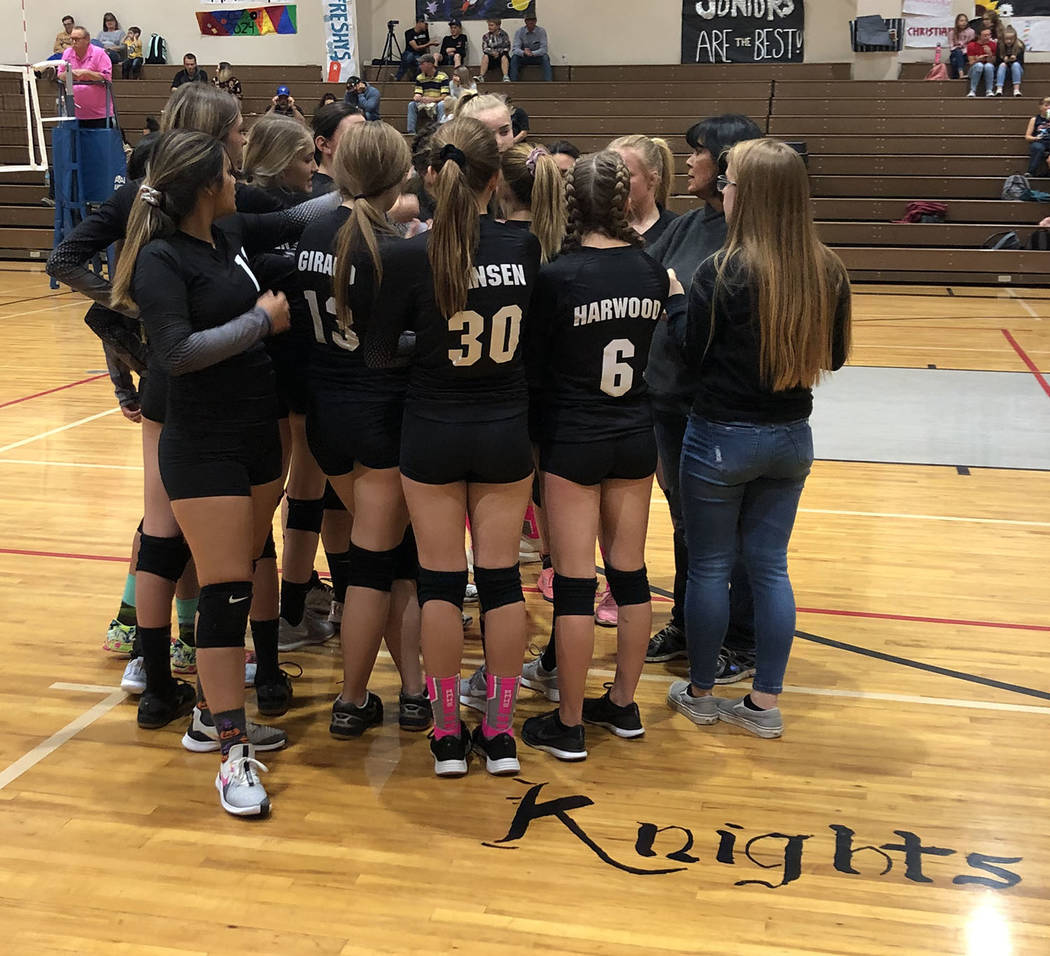 Tom Rysinski/Times-Bonanza & Goldfield News Round Mountain volleyball players gather around coach Anna Berg during a timeout in their 3-0 win over Sierra Sage/Rite of Passage on Saturday. Kayla Brown totaled 4 kills, Brooklyn Hanks led with 4 assists and Emma Jane Gines finished with 9 assists for the Knights. 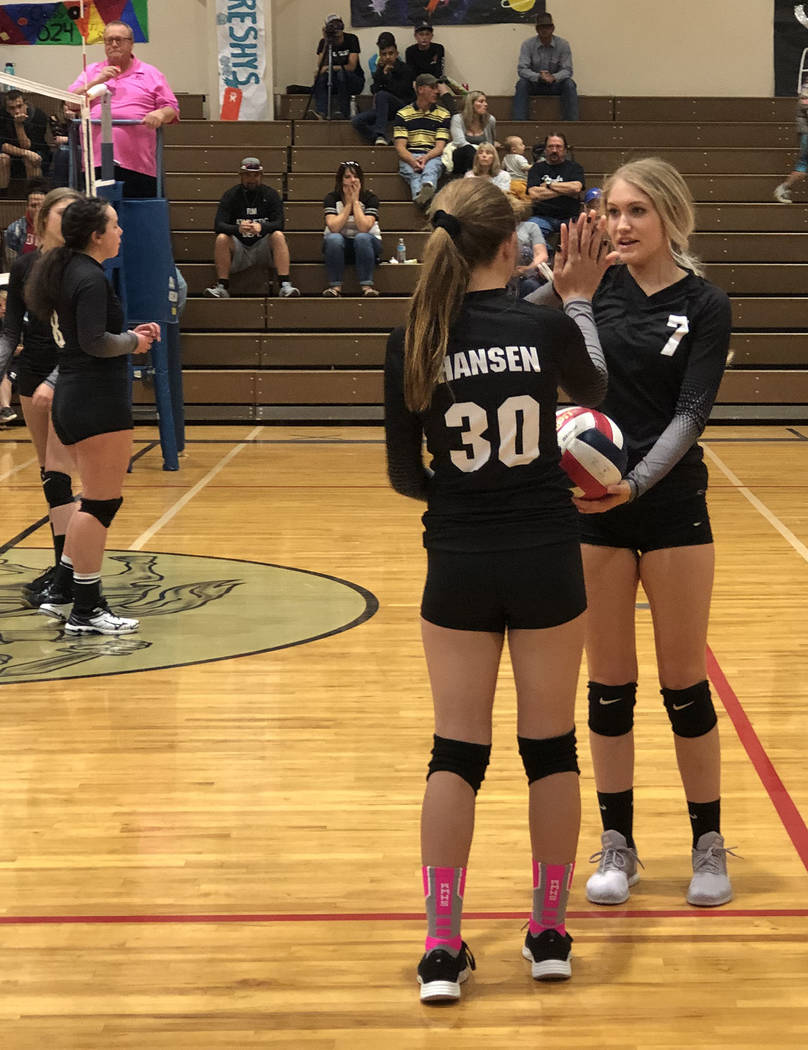 Tom Rysinski/Times-Bonanza & Goldfield News Freshman Rion Hansen (30) gets ready to go in for senior Brooke Christensen during Round Mountain's 3-0 win over Sierra Sage/Rite of Passage on Saturday in Round Mountain.

“I didn’t know what to expect,” Berg said. “It’s been years since I had coached. But it seemed like every single day they just improved and progressed. I’m happy that we’re where we are right now, that we actually made it to playoffs, and they still have very good attitudes.

“I completely changed their offense. I was kind of nervous about it, but they just went with it.”

Most importantly, the Knights took care of business, beating the teams they were supposed to beat, including back-to-back 3-0 sweeps over Mineral County on Thursday and Sierra Sage/Rite of Passage on Saturday that completed a 4-2 season in the Class 1A Central League, sending them into the region tournament.

“We’re going in third,” Berg said of her team’s seeding. “It would be nicer to go in higher, Tonopah (3-2) still has Hawthorne and Coleville (3-2) still has (first-place) Smith Valley. That shouldn’t change our seed unless Tonopah loses to Hawthorne by some chance. But I think Tonopah will end up winning.”

The Knights defeated Coleville and lost to Tonopah, settling any potential ties.

Being in the playoffs with any seed is an accomplishment for a team that went in having little feeling about how the season would go.

“I feel like when the season started we were very disorganized, but as the season progressed we became more of a team,” junior Emma Jane Gines said. Gines led the Knights with 9 assists Saturday in their 25-9, 25-14, 25-11 win over the Rams.

“It was very chaotic because nobody had designated positions,” said sophomore Brooklyn Hanks, who finished with 4 assists, 4 aces and 2 kills Saturday. “But as the season has gone on everyone has gotten more comfortable with each other and playing in the right spots.

“Personally, I’ve been playing more back row as the season progressed. As a hitter, I’ve had better hits and become more consistent because of Anna. I’ve learned a bunch of new techniques and just improved my skills a lot more compared to last year.”

Gines, too, has found herself moving around on the court and enjoying some success in the process.

“My expectation was that I would grow more as a setter and be put in any position and work up to Anna’s expectations,” she said. “For all three years I’ve just been a setter, but this year I’ve played back row, I’ve been a hitter, I’ve been all over the place. It makes you more knowledgeable about what other players have to do.”

Senior Kayla Brown, back on the volleyball team after playing golf last year and as a freshman — her mother is the Knights’ golf coach — agreed that Berg has made a difference, crediting the coach with luring her back to the court for her final year.

“I think I learned more about the game than I did in my previous year,” Brown said. “I learned how to play volleyball instead of just putting the ball up in the air and hoping for the best.”

Brown paced the Knights with 4 kills Saturday and also registered 3 digs and 3 aces, serving at 100 percent on 13 tries.

“Kayla’s probably my most dominant personality out there as a leader,” Berg said. “Having her on the court is really helpful. But the last couple of games I’ve had Emma Jane stepping up and taking control. They move the leadership around and don’t fight with each other. I don’t have any bickering problems with them.”

Each of the Knights agreed the team has improved since the start of practice, and expectations will be higher next year.

“My hope for next year is that we make it to regionals again and at least place for state,” Gines said.

“I think next year we can work on some of the more technical things, better passes, better sets, kind of up-tempo instead of just playing fundamental volleyball,” Berg said.

But before that, there is the small matter of this year’s playoffs. If the seeds play out as expected, the Knights will open Class 1A Region I tournament play at 3 p.m. Friday against the No. 2 seed out of the West League.

“If the girls play together, we could be the wild card,” Berg said. “We could upset somebody. I really believe we can, but it depends on who shows up to play.”