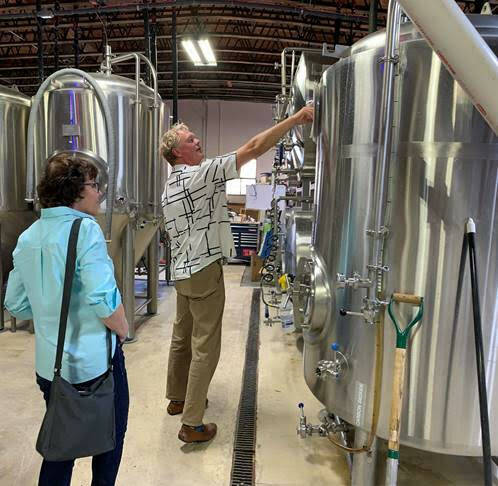 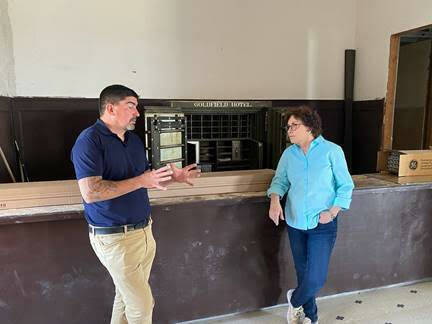 (Special to the Times-Bonanza) U.S. Sen. Jack Rosen (D-Nev.) met with Esmeralda County Commissioner Timothy Hipp on Tuesday, June 28 to discuss growth in the rural county that has fewer than 1,000 people.

U.S. Sen. Jacky Rosen (D-Nev.) kicked off a multi-day tour of communities across rural Nevada on Tuesday where she met with officials and business leaders in Tonopah and Esmeralda County.

Westerlund said they discussed the history of the Tonopah Mining Park Museum – one of the biggest attractions in the area – and also toured the site with park host Jeff Martin, while chatting about its unique features.

The park encompasses more than 100 acres and is situated on the original mining claims that started the rush to Tonopah in the 1800s, making it “Queen of the Silver Camps.”

Today, tourism is one of the main economic drivers in Tonopah. Revenue generated from hotel room taxes there grew from about $401,000 in fiscal year 2011-2012, to more than $715,000 in fiscal year 2021-2022, according to a report from the town’s tourism and events department. But the town, like many areas in rural Nevada, is still economically recovering from a lack of visitors during the pandemic.

As part of her visit, Rosen visited the Tonopah Brewing Co. to learn about challenges facing small businesses.

It’s one of many restaurants and bars in the state that coped with changing masking regulations and other COVID-19 protocols during the pandemic.

“I had the opportunity to hear directly from local officials and small business owners about how I can keep working to help them succeed,” Rosen said.

At a stop in Goldfield on Tuesday with Esmeralda County Commissioner Timothy Hipp, Rosen’s staff said she discussed growth in the rural county.

Esmeralda’s population has plummeted from its peak of 3,220 people in 1880 during the mining rush to about 729 people in 2020. The county lacks a number of business and essential services and many who live there commute to Tonopah and beyond for jobs and goods.

“It’s important to me to represent all of Nevada and make sure our rural communities and small businesses have the resources they need from the federal government,” Rosen said.

In 2018, Sen. Rosen defeated Republican incumbent Sen. Dean Heller by 5 percentage points. She was the U.S. representative for Nevada’s 3rd congressional district from 2017 to 2019.

Rosen said she’s been a leader in the fight to secure funding and resources for rural communities in Nevada.

The Payments in Lieu of Taxes (PILT) program provides payments to counties and other local governments to offset forgone tax revenues due to the presence of substantial federal land acreage within their jurisdictions.

About 67 percent of Nevada – roughly 48 million acres – is federally protected land that can’t be developed by tax-paying industries or homeowners. Without new sources of revenue, it’s difficult to maintain quality schools and other taxpayer-supported services.

“These PILT payments will allow many of Nevada’s rural communities to afford essential services, including those provided by first responders,” said Sen. Rosen.

Rosen also said she has led the charge to increase access to health care in rural communities, including by increasing access to mobile health care and addressing Nevada’s doctor shortage.

Access to health care in northern Nye County is a bit of a crux.

Tonopah is expected to build a new hospital to serve the region. It comes after Reno-based Renown Health moved out and was replaced by Las Vegas-based Central Nevada Regional Care at the beginning of the COVID-19 pandemic in early 2020.

During that time it was discovered that the hospital was not up to code. Its hallways are too narrow, the carpeted floors are non-sterilizable, and several other issues need to be addressed. About $1 million worth of renovations and amenities were added by the district, such as new floors, blood-testing and an X-ray machine. Despite the improvements, issues still persist and the hospital board has started the process of demolishing the old building and constructing a new facility.