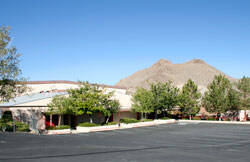 The $15.2 million project will relocate the school to a 5.5-acre site at 1 Tennant Drive near the town’s high school. The move will essentially create a centralized academic campus in Tonopah, serving pre-kindergarten through 12th-grade students.

The decision follows months of deliberations with Tonopah stakeholders to gather feedback on the project.

“We had two public information meetings where we solicited input from the community,” said Mark McGinty, principal of Las Vegas-based Knit, designers of the project.

Additionally, about 90 Tonopah Elementary parents participated in an online poll last year conducted by school administrators. More than 60 percent of Tonopah parents preferred to relocate the school to Tennant Drive, according to the survey.

“They want a new school,” he said.

District officials had considered building a new elementary building at its current site on Idaho Circle, but students would likely have been disrupted by the construction project.

“The kids [could’ve stayed] in part of the building, and we [would’ve built] the building next to it,” McGinty said.

But board members unanimously supported the alternative site plan.

Buses will drop off students at another dedicated area, McGinty said.

“Keeping the buses, parents and students separated is the No. 1 goal,” he said.

Construction is expected to begin as early as January 2023, and could take about 12 months.

Enrollment at Tonopah Elementary school is 163.