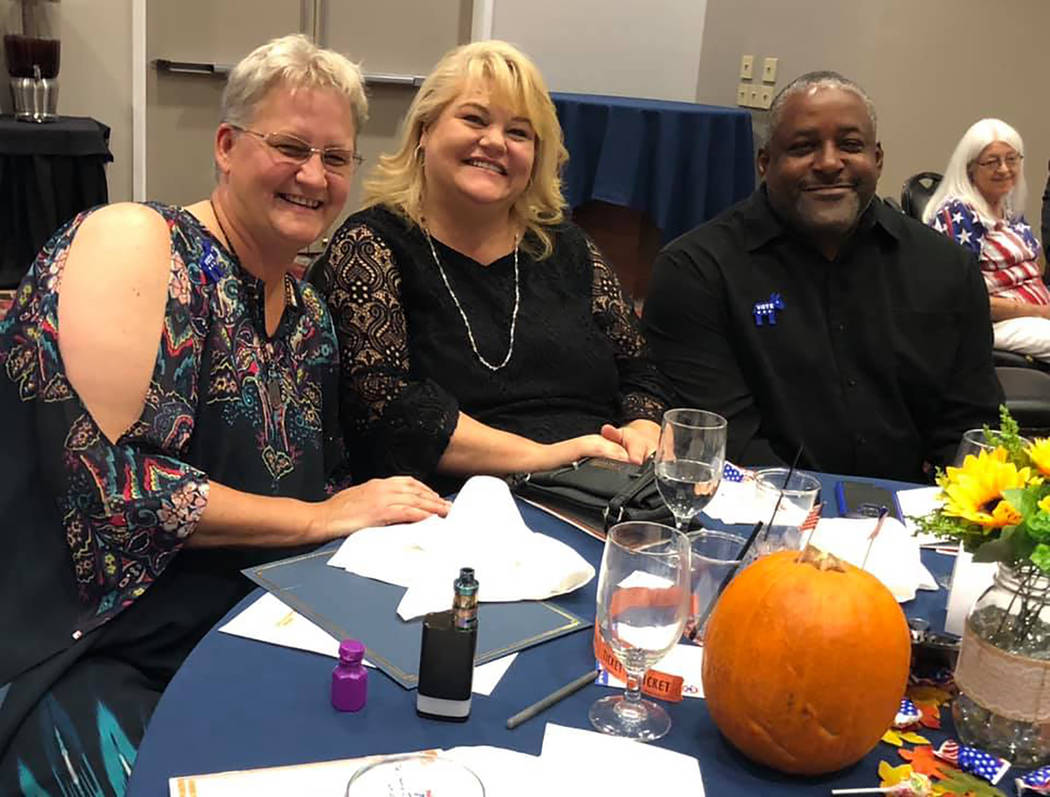 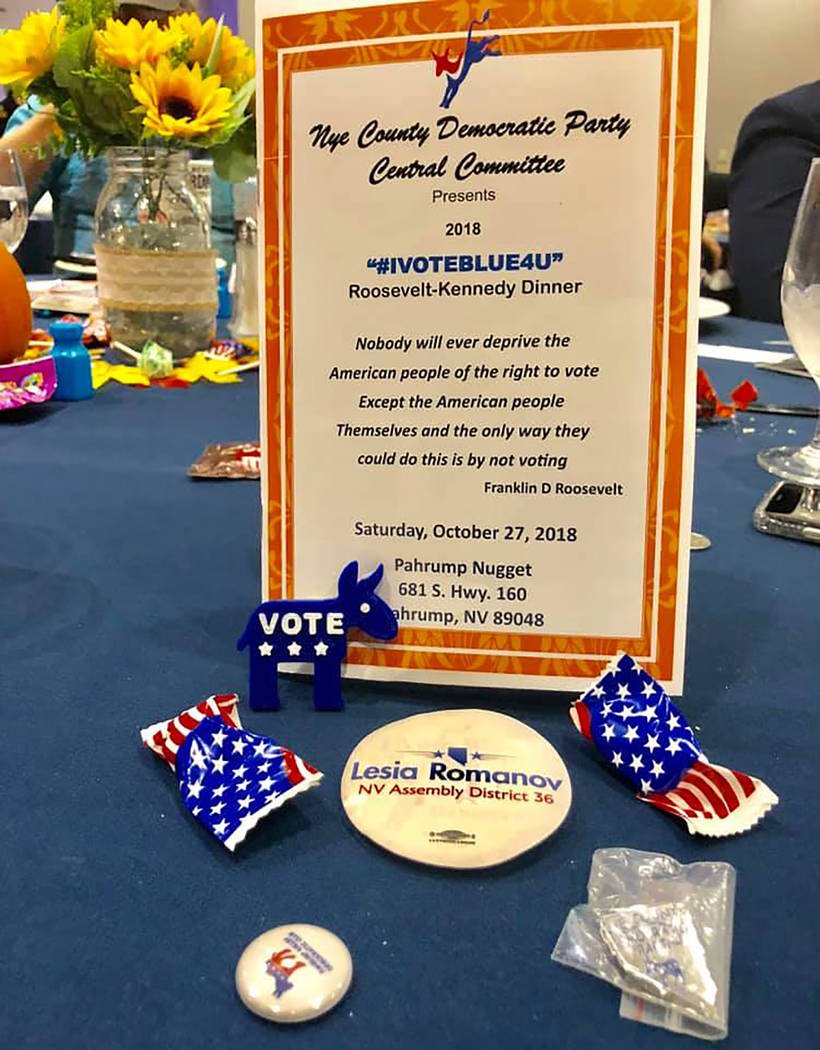 Special to the Pahrump Valley Times Tables decorations touting various Democratic candidates and encouraging voters to head to the polls adorned the tables at the Roosevelt-Kennedy Dinner. 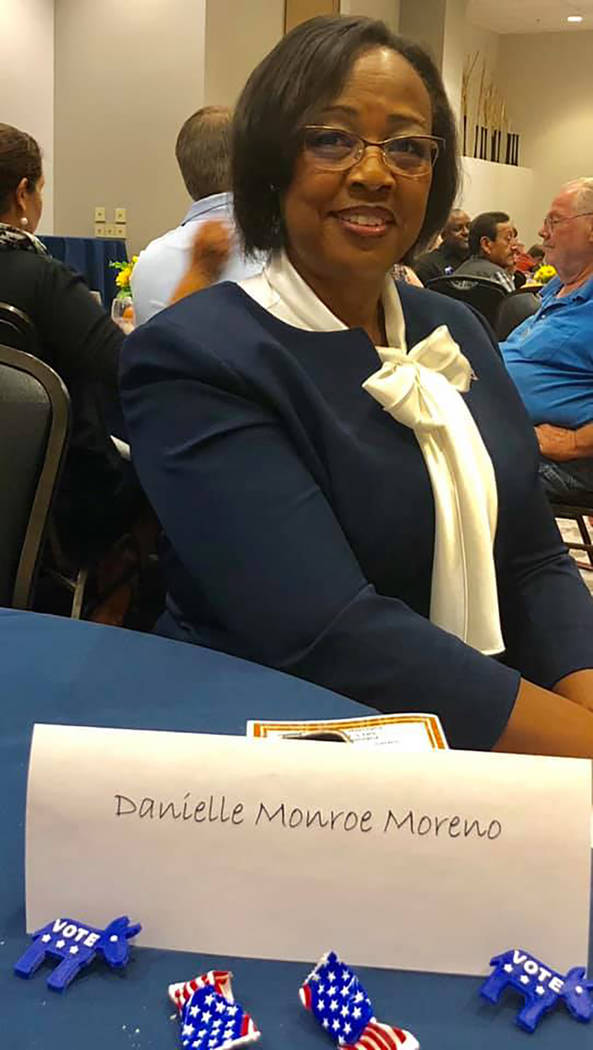 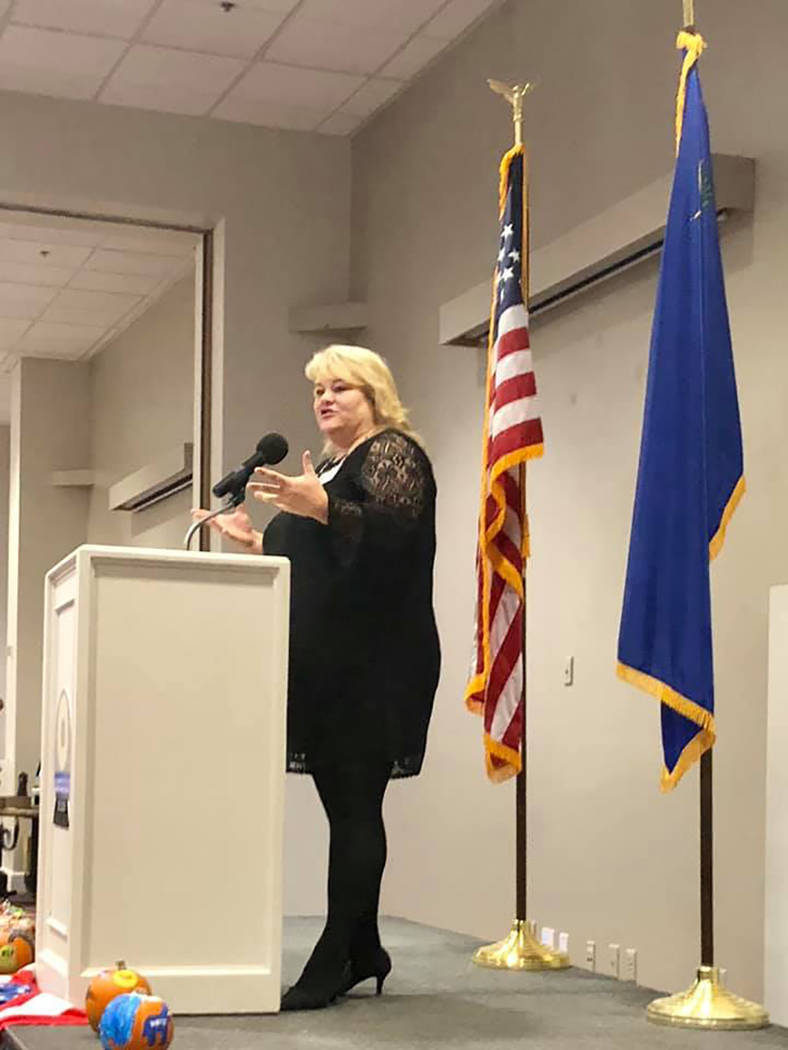 Special to the Pahrump Valley Times Nevada Assembly District 36 candidate Lesia Romanov speaks to the crowd at the Roosevelt-Kennedy Dinner.

Hosted on Saturday, Oct. 27 inside the Pahrump Nugget Events Center, the Roosevelt-Kennedy Dinner drew Democrats from across the Silver State to Pahrump for an evening of rallying and fundraising, helping give energy to the Democratic population in the final days leading up to the conclusion of the 2018 general election.

Byrne faces incumbent Republican State Controller Ron Knecht while Brooks has two opponents to vie with for his Assembly seat, Republican Noel Searles and Independent American Jonathan Friedrich. In her race for Assembly, Romanov is set against Republican nominee Dennis Hof, who passed away on Oct. 16 but whose name will remain on the ballot. Goldstein is pitted against Republican Leo Blundo and Rust is facing Mark Owens in the nonpartisan school board race. Monroe-Moreno does not have a challenger in the election.

“Chris Brooks was our keynote speaker and he did a wonderful job. He was able to speak for many of the candidates who were not able to attend because some of them had trouble getting down here for the dinner from Pioneer Days. So he spoke for them, which was really great because it brought in more candidates through his voice,” Fitzpatrick detailed. “Catherine Byrne was there as well, she spoke and she is really fabulous. And of course, Lesia Romanov spoke too and it was a very interesting night.”

There were a wide variety of topics covered during the dinner and while the Democrats’ main platforms were espoused, heavy emphasis was placed on subjects specifically of interest to Nye County residents.

“Water rights issues are humongous for the citizens here in Pahrump,” Fitzpatrick informed when asked to highlight a few of the issues discussed that night. “VA issues, such as getting a real hospital, not a virtual one, that was big. And the roads getting done; people are happy to see it happen but they would like for it to happen quicker. Folks are also worried about the Native American community’s needs and whether or not they are being pushed out of the vote.”

Outside of the heavy subject matter, the Roosevelt-Kennedy Dinner included quite a bit of fun as well, with photo booths for keepsakes, a delightful dinner to fill attendees’ bellies and auctions and raffles for patrons to win.

Fitzpatrick was extremely complimentary of professional auctioneer Ski Censke, who regularly oversees auctions at community organization fundraisers and is known to inspire gales of laughter with his auctioneering antics. “We had Ski as our auctioneer and he did an incredible, just an amazing job. He is so funny, he is just a blast! So huge kudos to him for all he did for us, we really appreciate him,” she said brightly, adding her gratitude for the venue staff as well. “The dinner was so yummy and the Nugget did such a good job of helping us make sure it was a successful evening. The staff there is the best, they are so helpful.”

Fitzpatrick said she wanted to send a big shout-out of thanks to all those who donated auction and raffle prizes, as well as all the businesses that had advertised in the event program.

The total amount raised was not quite tallied as of press time but Fitzpatrick said she could confidently say that the event was a tremendous success that had brought in a sizable amount of cash to support the local Democrats’ efforts.

For those interested in learning more or joining the local Democrats, Fitzpatrick noted, “People can contact us at any time and we will come to them and talk to them. Anyone who wants to get involved can come to our meetings, which are held the fourth Thursday of each month at 6 p.m. at the Comstock Park Recreation Club. People can also contact us and learn more through our website www.nyedems.org and Facebook.”