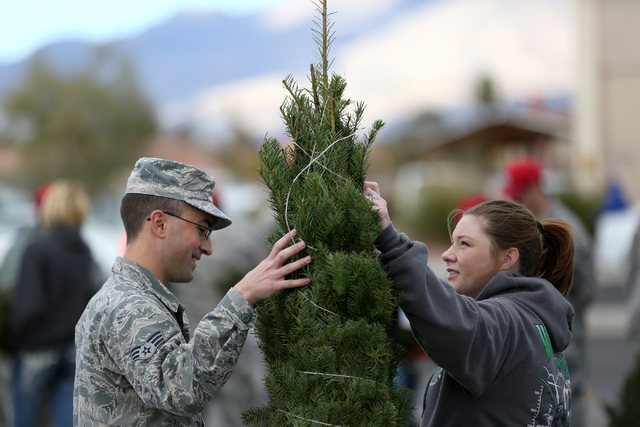 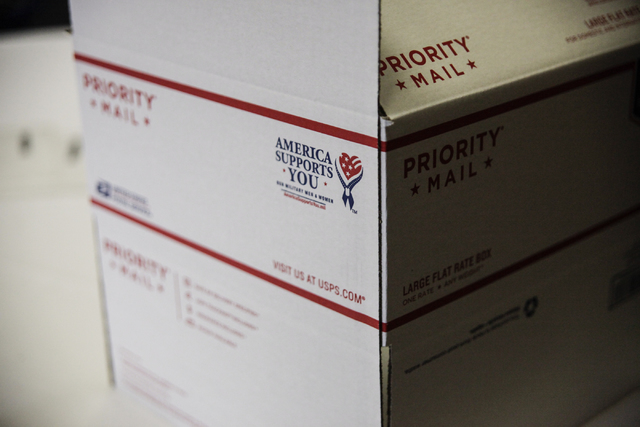 A flat-rate box waits to be packaged by the Blue Star Mothers of Henderson and Boulder City as part of a Christmas care package for deployed troops Tuesday, Nov. 19, 2013 at the Henderson Convention Center. The boxes were filled by donations as part of the Fifth Annual Stockings for our Troops. (Robert Winn/Las Vegas Review-Journal)

When this column is published, throngs of shoppers will be rioting and causing general mayhem in stores for Black Friday.

Well, hopefully not rioting, but today does mark the unofficial kickoff to the holiday shopping season and all the chaos that that brings.

I am normally rather bah humbug about the Christmas holiday season, my family might even say I bear a resemblance to the Grinch in the Dr. Seuss book “How the Grinch Stole Christmas.”

Really I am not, but I do have some issues with the holiday season being overhyped and overmarketed every year. I mean really, is it necessary to put up Christmas displays in stores before Halloween?

Some communities have recognized our obsession for all things Christmassy and have created entire tourism marketing campaigns aimed at helping you separate your dollars from your wallet or purse in pursuit of achieving that holiday spirit nirvana.

In the 1960s, Leavenworth in the state of Washington had the foresight to recognize that their community was losing jobs because their primary industry, logging, was closing and moving to other areas. A committee was formed to explore creating a themed town. After visiting the Danish-themed town of Solvang, California, the committee voted to turn Leavenworth into a replica of a Bavarian village.

Over the years, Leavenworth has extended that Bavarian theme to the holiday season. The town has opened the Nutcracker Museum, featuring over 5,000 different nutcrackers, and hosts an annual Christmas lighting ceremony. Leavenworth was also named the Ultimate Holiday Town USA by A&E.

Leavenworth is not alone in creating a Christmas experience destination. Other communities and businesses have joined in with Christmas tree lighting ceremonies, setting up artificial ice rinks for skaters, and even Santa Claus-themed bar crawls. In Southern California, the Disneyland resort turns into a winter wonderland with holiday-themed makeovers of their attractions. It even snows there every evening during the parade.

Adding to the holiday hype each season, we get inundated with Christmas commercials on every type of media hyping the latest and greatest toys, electronics, perfumes and colognes, jewelry, and countless other types of merchandise. Of course, if you are truly in the Christmas spirit you will go purchase a luxury automobile, tie a big red bow on it, and give it to your loved one for Christmas to show how much you love them.

Excuse me, but is that what we are supposed to be doing to celebrate Christmas and the holidays? Granted, it would be nice to get a new luxury car as a gift but that is not what Christmas is supposed to be about.

Coming together for the holidays is something we are in desperate need of in this country. I have friends and family that encompass a diverse set of political viewpoints. Some sit to the far left, some to the far right, and most somewhere in the middle. Almost all agree that they are sick of politics and appalled at the recent tragic events in our country.

Every day brings a new report of some politician saying or doing something inappropriate. Saying it’s inappropriate is being politically correct and polite. Acting stupid is a more accurate description. The NFL, televised awards ceremonies, mainstream press, TV talk shows, concerts, Hollywood, and sports commentators offering their political views are thrust in our face daily as examples of how pervasive politics are now in our lives.

It is also a sharp reminder of how divisive society is and how hateful individuals and groups have become. We need a break from the nonsense and the insanity. A timeout from a world gone mad. The holiday season is here to give us just that!

So, this holiday season I am putting away the Grinch costume, turning on the Hallmark Family Channel, visiting friends and family, and enjoying the season. I can’t quite bring myself to join the throngs of shoppers at the malls, but I have found that the most appreciated gifts are the ones that you take time to create yourself to give someone. I’ll take cookies over a gift card any day. Often just taking time to go visit someone that you haven’t spent enough time with means more than any gift.

Embrace the holiday season, turn off the political rhetoric, and take time to enjoy the holidays with your friends and family.

And for the record, I have attended the lighting ceremony in Leavenworth and I have watched it snow in Disneyland, so I am not always the Grinch! As a matter of fact, I think tonight I will put on my copy of “Scrooged” starring Bill Murray and have a hot chocolate to celebrate the start of the Christmas holiday season with my family.