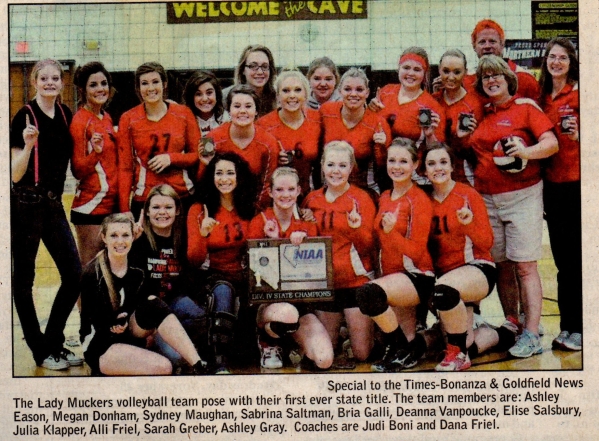 TONOPAH – The Tonopah High School Booster Club is organizing a night in which they will be dedicating a mural of the 2012 Nevada Division IV State Championship volleyball team. This will be held on Jan. 5, at the THS gym, at around 6:30 p.m. It will be held between the girls’ and boys’ varsity basketball games. They hope to have alumni from the 1954 championship basketball team and the 2007 championship football team in attendance as well.

The team was 25-5 overall and 6-1 in league, with the only loss being to Pahranagat Valley.

The coach was Judi Boni, and she was assisted by Dana Friel and Javier Gonzalez.

Boni knew that year that if she wanted to go all the way she had to beat Pahranagat Valley. They were the powerhouse team to beat and they had just won their third state title in a row in 2011. Every coach knew at the time, to beat a team like the Panthers you had to be aggressive. The Panthers were beating everyone, including some Division I and I-A teams.

“I was trying to get those girls (2012 Muckers) to attack and be more aggressive for two seasons,” Boni said. “It took drills and training to bring that aggressiveness out, to play hard and never let up. I really started pushing when we started league that year and stuck to the plan I had set up that summer.”

Boni said what the girls did in practice made a difference in the matches.

The coach said she knew she had the makings of a great team when she set eyes on Friel and Deanna Vanpoucke from the beginning.

“I knew when Deanna and Alli (nicknamed the monster and beast by Beatty) were freshmen they were going to make a great team and be hard to beat as leaders,” Boni said. “They were always learning from the upperclassmen they played with, asking questions, trying more complicated plays, working hard.”

When the team lost the league title to the Panthers that year it was a wake-up call.

“The earlier loss (to the Panthers) was a little setback but Alli and Deanna came back mad about it,” the coach said. “They realized I could push but they had to lead the other girls.”

And push the girls did, they beat Pahranagat Valley at the regional tourney and then also went on to beat them at state, the Panthers losing to the Muckers in three sets both times.

Boni recalled that it was not just Deanna Vanpoucke and Alli Friel. She said it was a team effort.

“Each girl played a pivotal role,” she said. “Greber was a quiet force at the net who played her best matches when we needed it. And we can’t forget Elise and Sydney splitting the other setter spot, Alli quietly kept them focused and going forward. Every member had a role, whether it was helping take stats, making things hard in practice for the starters, watching for weaknesses or cheering. Everything just clicked together.”

Boni’s goal was finally met with that class and she retired from coaching at the end of that year.

“It was an honor for Coach Friel and I to coach all these young ladies that year,” Boni said. “The previous years taught us a lot about how to handle the girls, use strengths and improve weaknesses. How to beat Alamo. Whipple (the Pahranagat Valley coach, who is still going strong) is a great volleyball coach. It was a great experience.”