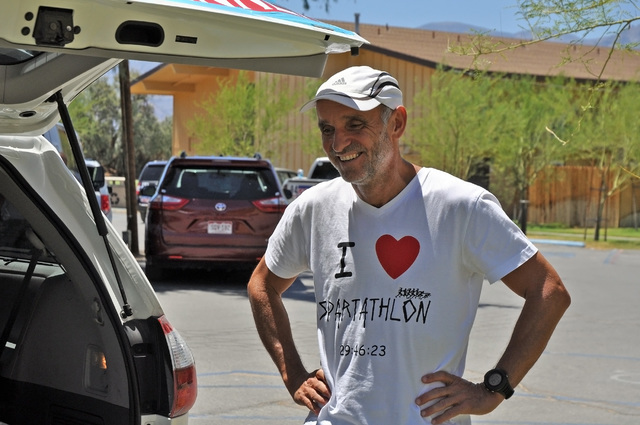 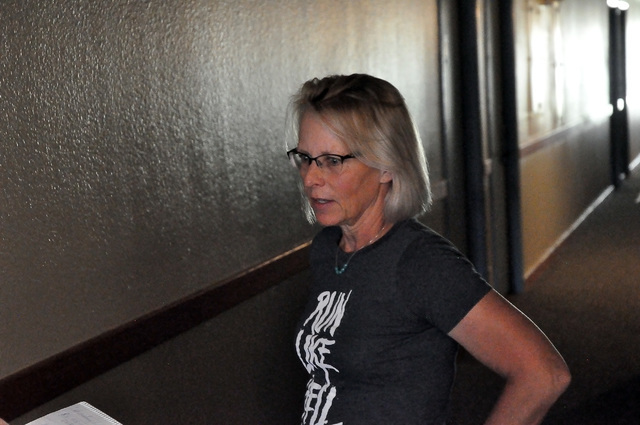 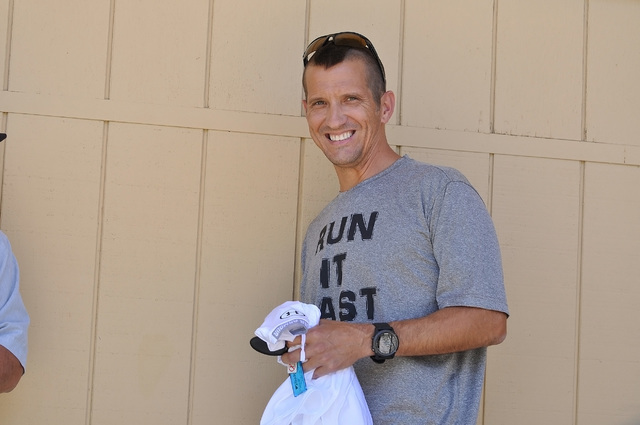 Horace Langford Jr / Pahrump Valley Times Badwater rookie Matthew Riely talks about his love for running and what he thinks it takes to finish the 135-mile race. 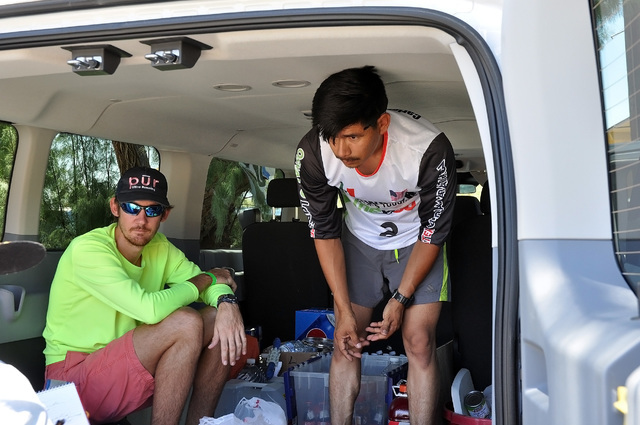 With every point he just kept adding to the lead and no one could catch up.

He reached his first point at nearly 20 miles at Furnace Creek in 2 hours, 03 minutes, which is a fast marathon pace, averaging 6.2 miles per hour. By midday on Tuesday, about 11 hours after his first point, he had opened up a three-mile lead on the nearest contenders, which was Mick Thwaites of Australia, and Dan Lawson of the United Kingdom.

By late afternoon on Tuesday, the mountains were quickly approaching as he slowed to a three-mile-per-hour pace, but he had enough of a lead to hold on for the win, crossing the line at 21 hours, 56 minutes and 32 seconds. His time broke his last years course record of 23:27 for his age group 20-29.

The runners ran through the night, having to put up with 100-degree weather for most of the night and then on Tuesday afternoon the usual 112-degree day set in to remind the runners that the heat is still a factor in this race, (despite moving the start to the night for the second year) as runners ran through Stovepipe Wells and Panamint Springs.

People, when they talk about this race, often spend a lot of time talking about the heat and neglect the steep climb up to the Whitney Portal. The steep mountains of the Sierra Nevada are where Fresno runner Oswaldo Lopez makes up his time. Lopez trains in the Sierra Nevada, but as he approached the fourth way-point he had eight runners ahead of him and couldnt make up the time, finishing in eighth place, 27:59:08.

Lopezs crew chief, Winston Fletcher, said Lopez looked good for the race and really didnt train much differently than he had in the past. Lopez is an eight-time finisher, two-time winner of the race. Fletcher described his runner as a tough competitor.

The 135-mile course attracts the best ultramarathon runners from around the world. Tough runners who want to test what they are made of against the legendary heat of Death Valley and the steepness of the Sierra Nevada.

For Matthew Reily, this was his first time in Death Valley as a racer. Although a rookie, he was not a stranger to the desert, having crewed for a racer the year before, where he learned how harsh the desert can be. His goal was to finish, which he did, 34:21:07.

I have a passion for this race because its one of the hardest races, Reily said. The heat is a factor and when you race you are racing the best of the best.

He said as part of the crew, he learned what it took to finish the race.

All you need is perseverance, Reily said. The guy that I crewed for last year got hurt halfway through the race and ended up walking the last 82 miles. Its all up here (pointing to his head).

To train for the race, he ran, and got his body used to being dehydrated.

I conditioned my body for the heat by running in a sauna suit, which is basically trash bags, he said. And of course I also ran 80 to 90 miles per week.

The race also attracts world-class runners. For Hungarian runner Zoltan Vajda, things were simple. Of course he was out to win, but if not, he would be satisfied with finishing in the top 10.

His crew chief, Craig Foster, said Vajda had some learning to do, not being from the United States.

He learned a lot about the past races and learned how the racers ran them, Foster said. He learned that heat causes a lot of problems with the body, The good thing about Zoltan, is that he eats very little when he runs and that makes crewing him easier.

This also translates into less vomiting, which is a common problem with all runners of this race.

Vajda said racing Death Valley was logical for him, a next step. He wanted to race something challenging after he had raced all the road races in Europe.

This is the toughest race, my cousin told me, Vajda said. I had to find another challenge. In this race, the course is my opponent.

Foster said the interesting thing about Vajda is that he just started running seven years ago and he is 53-years-old.

I had work-related stress and thats why I started racing, he said. I had bad stomach problems and I told the doctor I wanted to get rid of the problems without pills. So I started to watch my diet, exercising and I looked for something that would change my life. Now I have no more problems.

He finished in 18th in this race and it wasnt the heat that got him.

His cousin, Zoltan Sarkabi, said that the lack of sleep really took its toll.

In other ultra races that Zoltan (Vajda) ran, he usually finished in a day, he said. But because this race starts in the night, he lost two nights of sleep and his legs started giving way just before the fifth checkpoint. It was a long downhill going into Lone Pine and he ended up walking the rest of the race.

Kim Budzik of Friendswood, Texas started running seriously in 2001, and she is now 56. She said she has always been fascinated with running in Death Valley.

There was something intriguing about crossing Death Valley in the middle of July, Budzik said.  I first learned about the race in high school and wanted to do it ever since.

Her first Badwater 135 was in 2011 and she has been running in Death Valley ever since. She finished in 70th place this year. She feels she has beaten the heat and no longer throws up during this race.

Its a brutal race but I like my time out here, she said. Not having to worry about my stomach this year takes a lot off my shoulders. This course is challenging and I always come out to better my time.