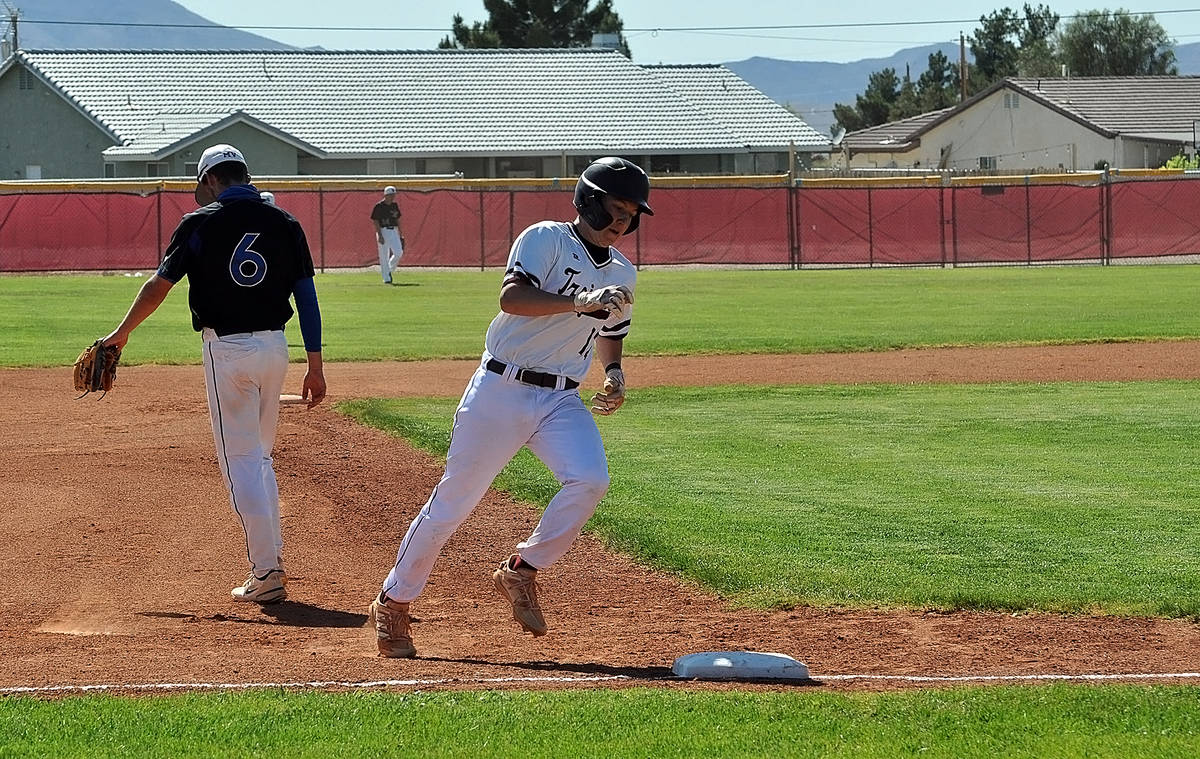 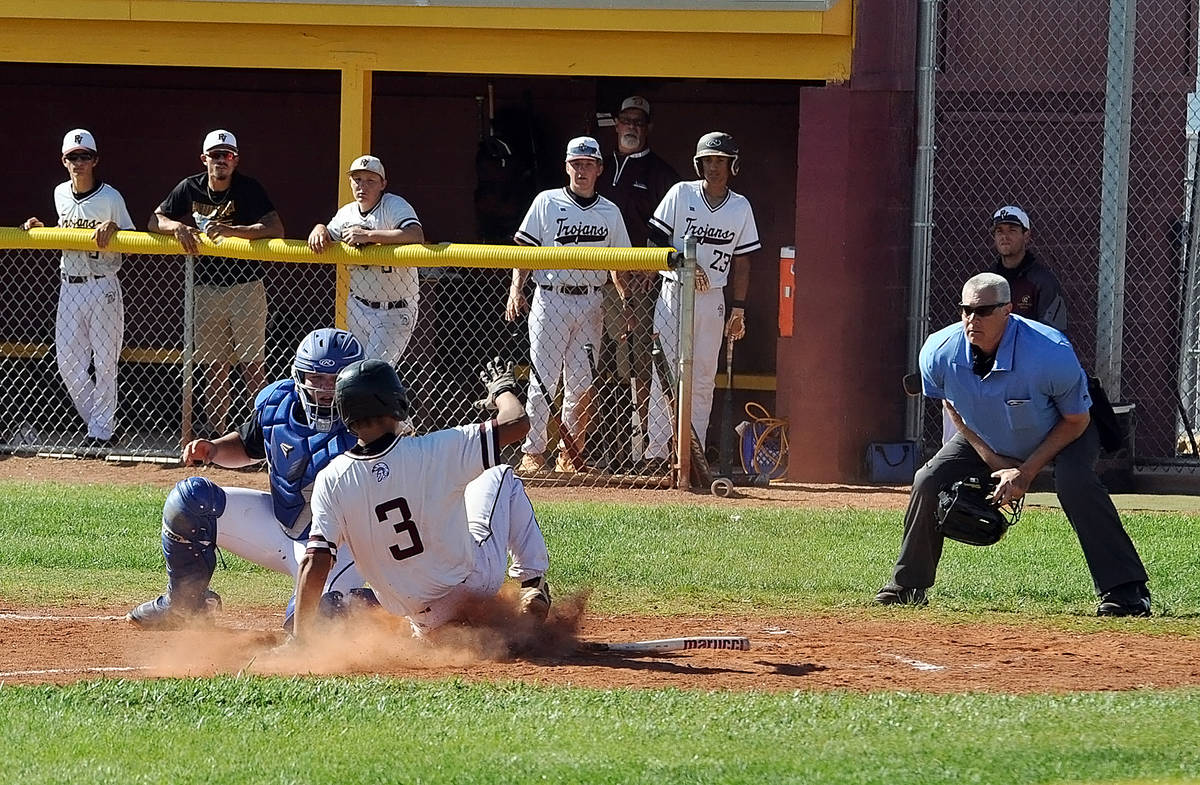 Horace Langford Jr./Pahrump Valley Times Freshman Justin Ybarra is tagged out trying to score on a single by Coby Tillery during the third inning of Pahrump Valley's 13-3 win over Moapa Valley on Wednesday at Rod Poteete Memorial Field. 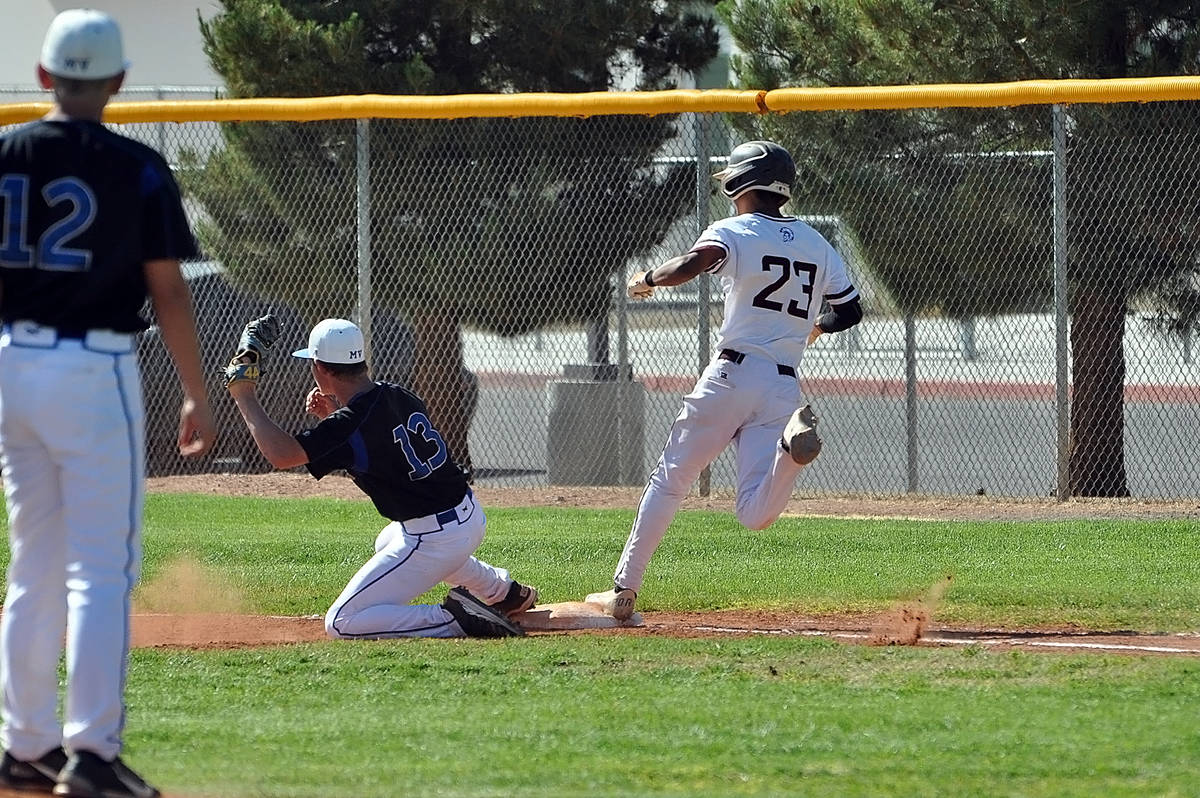 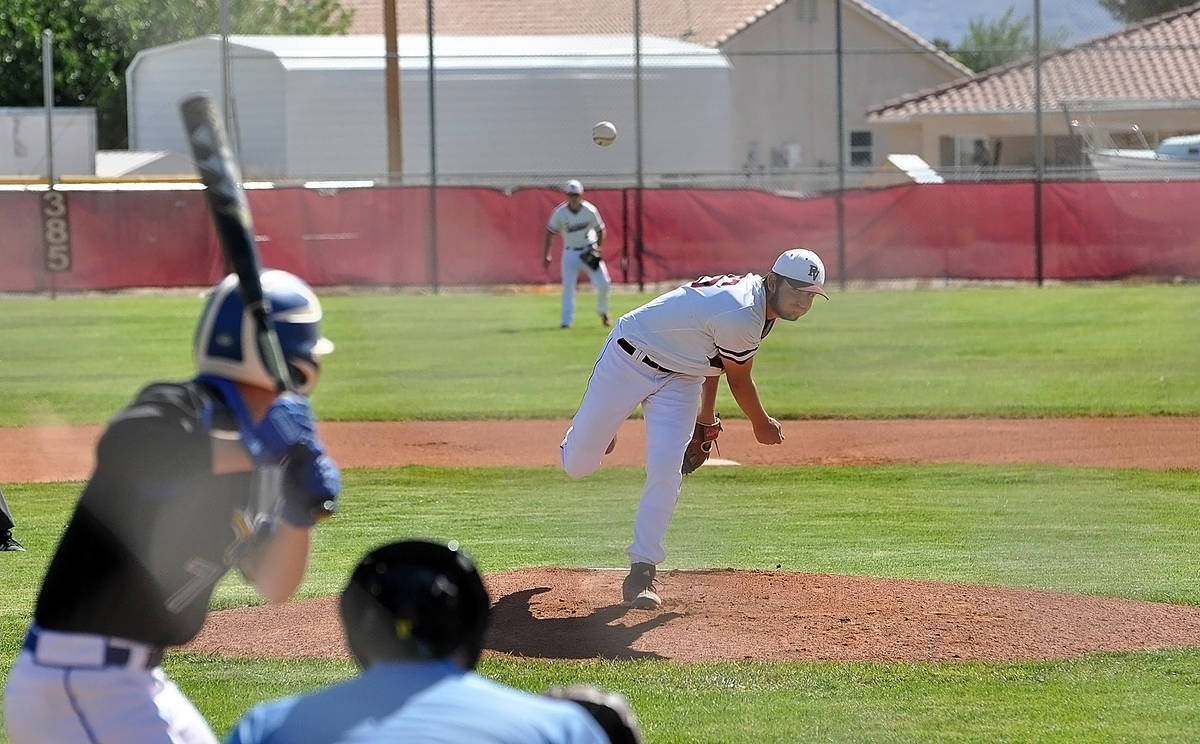 It was the Pirates who got off to a fast start, with a walk, a sacrifice, a triple to right-center and an infield grounder giving the visitors an early 2-0 lead.

“Early on in the game he was up in the zone, and after the first inning we came and talked,” Trojans assistant coach Drew Middleton said. “The umpire wasn’t giving him anything letter high, and I told him I really don’t care. We have to be down in the zone anyway. After that he adjusted, he got back around the knees and did what he needed the rest of the game.”

“I really just worked down and away,” Riding said. “I was trying to work the zone, get them to chase, nothing too good over the plate. I was trying to keep it off their barrel.”

It worked well enough that after that triple, Riding allowed only an infield single the rest of the way, recording 9 strikeouts, walking two and getting seven ground-ball outs.

“What Jake’s doing really well right now is he can throw all of his pitches at any point,” Middleton said. “He’s locating all three pitches. Against Boulder City (last week), his change-up was his best pitch. … Today it wasn’t exactly there, but he mixed in his curve ball really well and kept them off balance.”

During one stretch, Riding retired 15 of 16 Pirates, getting the side in order during the third, fourth and fifth innings. But Riding pitching well was not a surprise; scoring 13 runs, getting 10 hits and making productive outs marked a needed breakout for the Trojans’ offense.

“The last few games we’ve been kind of iffy with our at-bats, and (Tuesday) in practice we spent the whole time working on jobs — moving runners over, bunting, stuff like that,” Riding said.

The Trojans drew 7 walks off of four Moapa Valley pitchers, were plunked twice — both times it was sophomore Sean Owens, and both times in the middle of a rally — hit two sacrifice flies and twice drove in runs with infield outs. There were also 9 stolen bases,and Scott Hirschi scored on a balk caused by Fidel Betancourt taking off early on an attempted steal of second.

“It was definitely a must-win,” Middleton said. “But with just how bad we’ve struggled offensively the last week and a half, two weeks, it was really important today to come out and hit the ball as well as we did. Our top three guys have been hitting, it’s been the rest of the lineup that’s been worrisome. Today, we came out and crushed the baseball.”