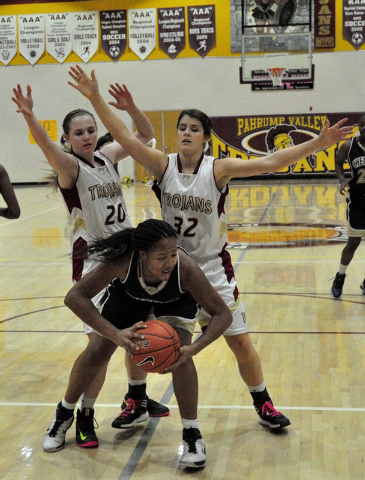 They continued playing well through the third quarter, but horrible turnovers denied them the win in the fourth quarter and they lost 37-29.

At the beginning of the fourth quarter the girls were down by 10 and they had three chances to score on Cheyenne turnovers but couldn’t convert.

Then they turned the ball over four times and this gave Cheyenne a 14-point lead with 3:57 left on the clock. They never really recovered from that.

Trojans Coach Jennifer Hagstrom felt her team played a good first half and wasn’t too rusty after the break.

“We had some good practices during the break. There was a little rust because everyone wasn’t together the whole time,” Hagstrom said.

In the fourth quarter the coach said her girls were getting beat on the boards.

“We knew if we didn’t rebound that they were going to beat us,” she said.

As far as playing Western on Thursday the Trojans feel they can win as long as they shoot the ball.

“We just need to shoot the ball. They are wide open and not taking the shots,” Hagstrom said.

The girls were on the road against Western (3-12, 1-2) on Thursday, which was past deadline. The Trojans are hoping to end their losing streak against the Warriors. The team’s next game is against Faith Lutheran (7-3, 1-0) on Tuesday at 5 p.m.

The Trojans boys team fell victim to the Cheyenne scoring machine and lost 64-50. The boys have maintained a great attitude despite the losses (0-6, 0-3). In the first half the Trojans had some crisp moves against the Cheyenne team (6-7, 3-1). In the first quarter they executed a perfect give and go, which resulted in a basket. What is keeping them from turning their well-executed plays into a win is the physical match-ups with the other teams.

Trojans Coach John Toomer said his team is working hard to get their first league win.

“There is a lot of dedication and a strong desire to improve in each game,” he said. “This group is really becoming a team and working hard to becoming better team players instead of individuals.”

Daniel Foss was on fire on Tuesday night and scored 17 buckets against the Desert Shields.

Beatty Hornets boys went up against Word of Life in Las Vegas on Tuesday and fell hard 62-36. Word of Life (4-2, 1-0) got off to a good halftime lead of 42-11. For the boys, Luis Flores and Jacob Oseguera led the team in points with 8.

The Lady Hornets are undefeated (3-0, 1-0) after beating Word of Life on Tuesday 36-16. Denise Gonzalez was the lead scorer for the girls with 9 points.

Hornets Coach Aimee Senior felt her girls were a little sluggish. “They had a hard time making easy shots under the basket. We had a couple practices over the break but not everyone showed up, so only having one practice before a game is tough in working out the kinks,” she said.

Despite the sluggishness, Word of Life was worse.

“Word of Life was playing man to man defense and we did a lot of driving to the basket. We couldn’t make a basket, but it was good experience for us to have the defense play too close so they got some extra work at driving,” Senior said.

Senior’s defense held their opponent to 16 points by employing a trap defense.

“This was a new defense. So we got quite a few steals which held their score down, and we were forcing Word of Life to shoot from the outside,” Senior said.

The Hornets will play Indian Springs at home this Saturday at 11:30 a.m. and hope to win two league games in a row.