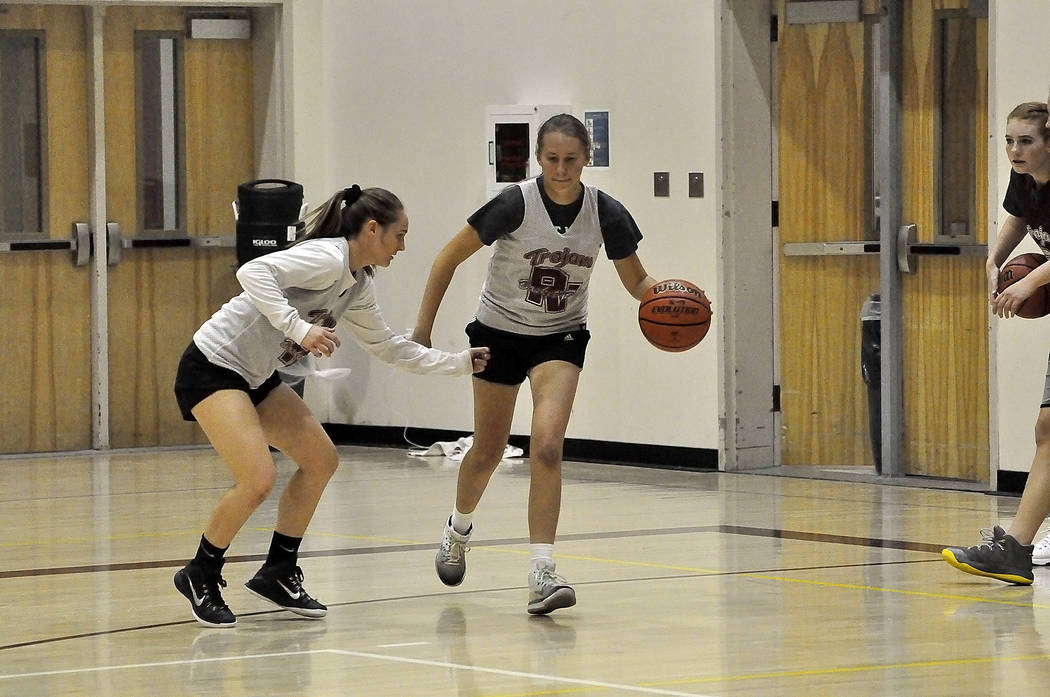 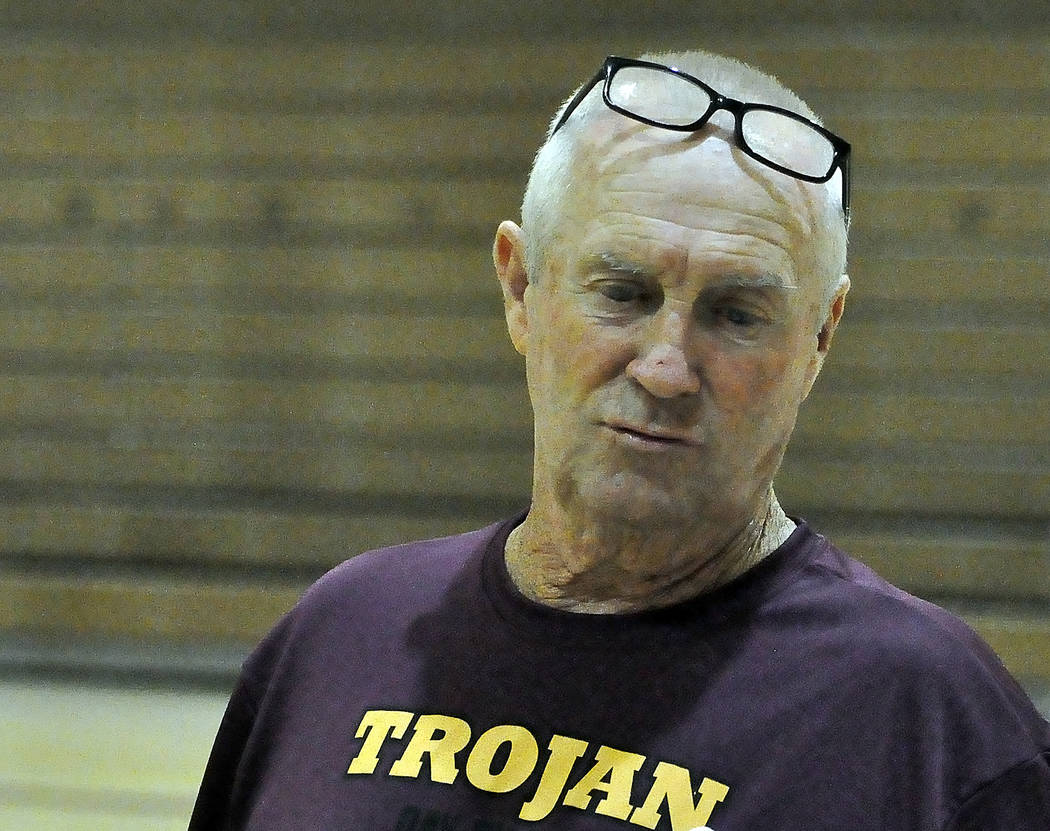 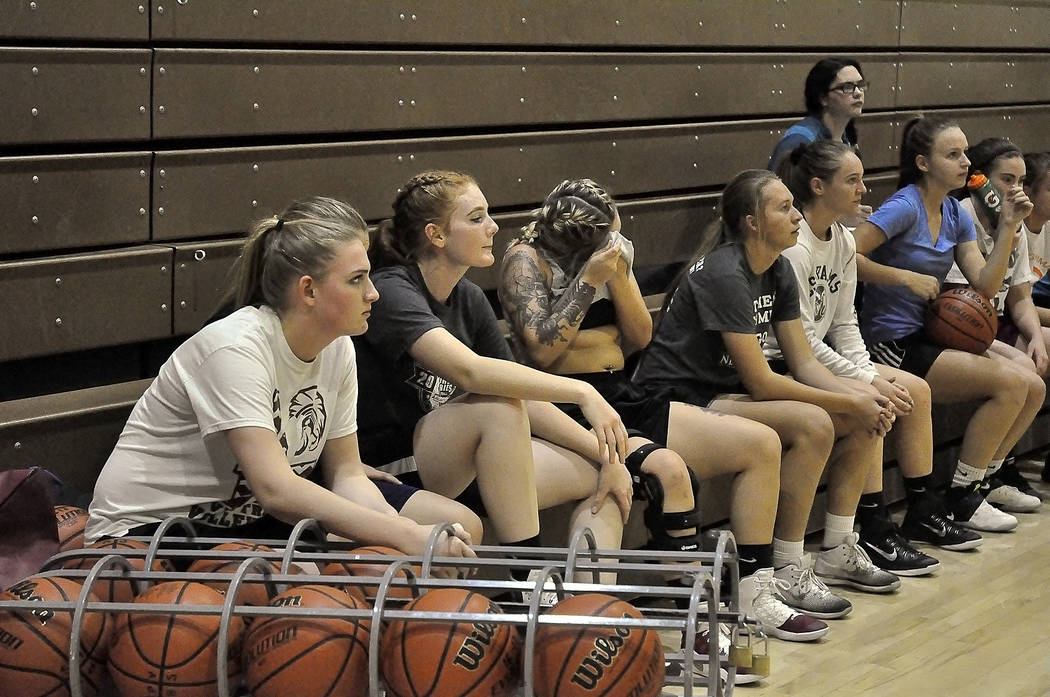 Horace Langford Jr./Pahrump Valley Times - Trojans girls varsity basketball listens to instructions before practice. Hopkins took the team to the playoffs last year as the third seed team. The team had not seen the playoffs since 2008, which was the last time Hopkins coached basketball. 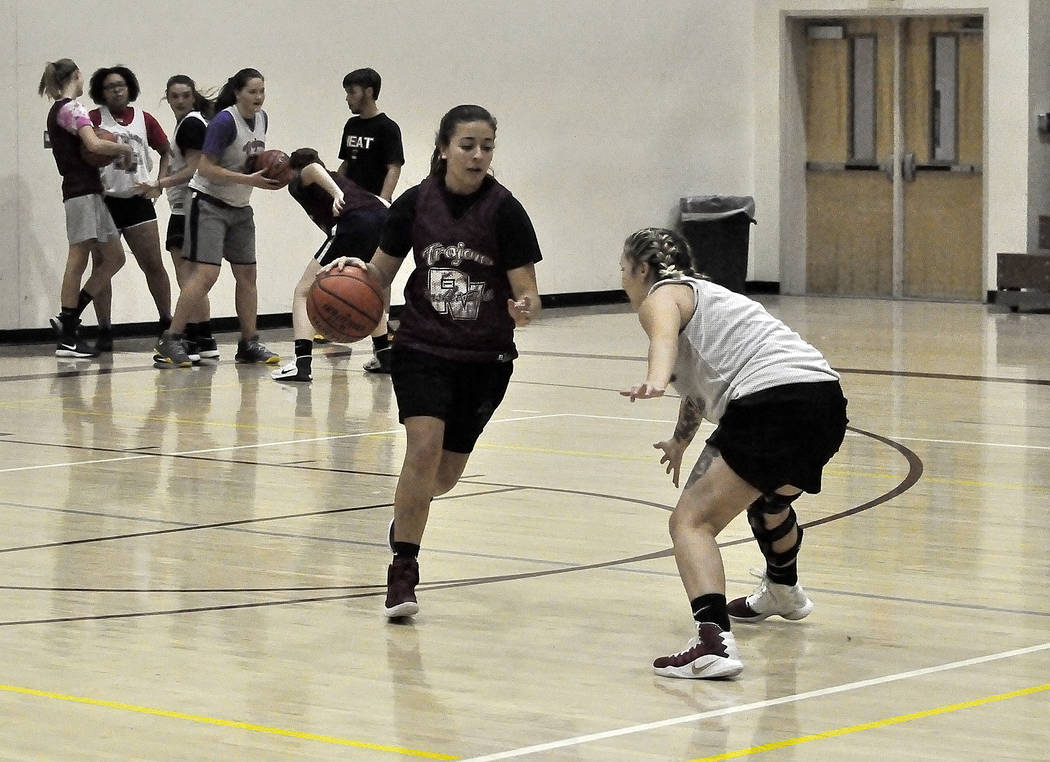 Horace Langford Jr./Pahrump Valley Times - Virginia Weir takes the ball down court as Sabin Chaidez guards her in a ball handling drill during practice on Tuesday. The girls first game is at home against Del Sol at 5 p.m. on Nov. 28.

The Lady Trojans girls hoopsters return to the court “fully reloaded” for the 2017-2018 season. Pahrump Valley High School girls basketball coach Bob Hopkins, in his second year back on the court, said his team is ready for the season.

“We are not rebuilding, despite losing all the seniors last year,” he said. “We are simply reloading. This year’s team is a lot quicker than last year’s team. We also have a lot of returning lettermen from last year. It is an experienced team.”

Last year the team finished third in the Sunset League (12-14) and went to the playoffs for the first time since 2008. The team graduated nine seniors last year.

Hopkins said he has some height and a lot of girls competing for the post position, which usually goes to the tallest girls. He said girls like Samantha Runyan, Kylie Stritenberger, Katherine Daffer, Nicky Velazquez, and Savannah Fairbank are competing for this spot.

According to Hopkins, he has an aggressive form of offense where the girls, “take the ball to the hole,” which means they will go hard to the basket.

The offense relies on good ball-handling skills and a lot of good passing.

“We work at ball handling every practice,” Hopkins said. “If you want to be good at something, you have to work at it.”

Last year, teams were able to pressure his team and basically, he is just returning the favor.

“The girls worked on pressure (defense) at the end of the season last year and this year we will continue with a more aggressive defense,” the coach said. “I tell the girls all the time when it comes to defense, think of what you hate about what other girls do to you when you are on offense and do that.”

The Trojans host Del Sol on Nov. 28 at 5 p.m. for their season opener.