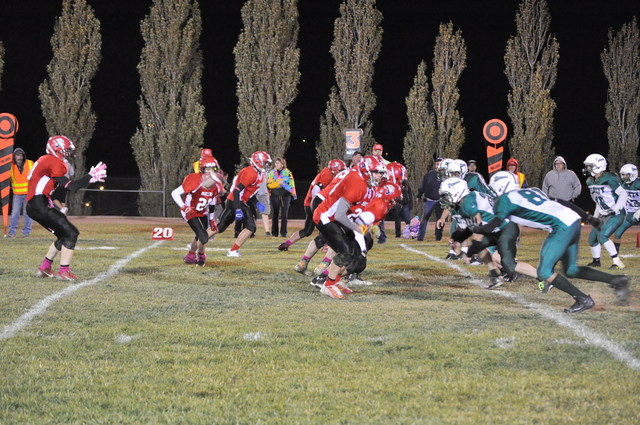 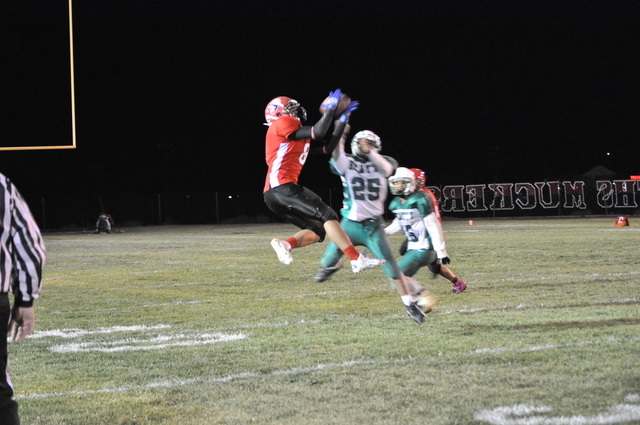 Injuries and turnovers were the difference in the game in this heated rivalary between Beatty and Tonopah. Tonopah lost some key players and had four interceptions and three fumbles in the 55-33 loss at home.

“This was the most players I have ever lost in a game,” said Muckers Coach Duffy Otteson.

The Muckers (2-5 overall, 0-5 Division IV Southern) drove the ball downfield twice in the opening quarter against the Hornets (5-2, 3-2) and scored. It seemed that Tonopah was off to their first division win.

Hornets Coach James Robertson said that the Muckers were running right up the middle with no problem in the first quarter.

“We kicked off and they drove right down the field and we couldn’t stop them,” Robertson said. We were down 14-0 right off the bat.”

Beatty made some big plays and that saved the game for them. Down 14-0, Tonopah kicked off and Luis Flores ran the ball the kickoff back for a touchdown, which made it 14-6. The Muckers answered by marching down the field agains and made it 20-6. Beatty scored again but Tonopah made the game 27-14 and with 25 seconds left on the clock the Hornets came back with a touchdown to make it 27-20.

“I don’t know why, but the Tonopah coach had them kickoff to Luis and he ran the ball back again for his second touchdown,” the coach said.

Just before the half ended and it was 20-14 the Muckers lost two crucial players, running back Jeb Ayers and lineman Kekoa Elliot.

Elliot and Ayers both went down with knee problems.

“When Jeb (Ayers) went out of the game it was hard for us to adjust both offensive and defense. It is hard to replace two starters,” Otteson said.

Tonopah Senior Jimmy Withers recognized that after the injuries his team could not focus anymore.

“When they went out we felt like we lost momentum and they took advantage of having two starters on both sides of the ball out, and it’s a lot to overcome,” he said.

During the second half, the Hornets outscored the Muckers 35-6.

At the half, Robertson had to make some adjustments in hopes of slowing down the Muckers’ rushing attack. At the time, he had no idea that one of the lead rushers for Tonopah was out of the game.

“To win the game I went from a 3-4 defense to a 4-3 because we couldn’t stop the run up the middle,” Robertson said. “Our linebackers were getting blown off the ball. I put more beef in there. It slowed them down a bit.”

“Flores was getting tackled and he pitched Zamora the ball in the last second and Zamora took the ball down for a touchdown,” Robertson said. “It was a wild game and this play was a play from a backyard football game.”

Beatty ate up the clock on the ground in the second half. The Hornets ended up with 287-yards rushing for the game.

“I wanted to keep the ball away from their offense because we couldn’t stop them,” Robertson said.

As far as the Beatty passing game it was pretty quiet. Flores passed for 70 yards and one touchdown. Both completions were to Jacob Oseguera.

According to Robertson, the Beatty defense also helped win the game by making big plays. He said Flores had three interceptions in the second half.

“We stalled their drives. In total we made four interceptions and had three fumble recoveries. Their turnovers killed them.” the coach said.

Finally, special teams scored three touchdowns in the game for the Hornets. One of the touchdowns came from the punt return team which blocked a punt in the Muckers end zone.

“We won by 22 points and if it wasn’t for our special teams we wouldn’t have won the game,” Robertson said.