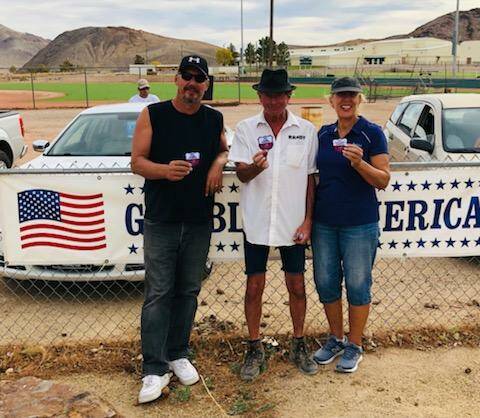 The tournaments kicked off on Friday, Oct. 29, with the inaugural Roadhouse 95 Saloon doubles tournament. Because this was the first year doing a tournament at the Roadhouse 95, this was an unsanctioned event.

The event had seven teams, each with two players. The tournament was double elimination style, meaning teams aren’t knocked out until losing twice. There was also a $5 buy-in for each player to participate.

The winners of the Roadhouse 95 tournament were Joe Kalache and Jarod Serrano. Serrano is a native to Beatty, and Kalache is from the Las Vegas area.

Second-place finishers for the tournament was the team that was comprised of Dan Dunn and Randy Salzwimmer. Dunn and Salzwimmer came out of the loser’s bracket to face Kalache and Serrano in the championship round, who they also lost to in the opening round of the tournament.

The third-place finishers of the tournament were Mark Kaczmarek and Willy Zuloaga. They originally lost to Kalache and Serrano in the final round of the winner’s bracket, before moving over to the loser’s bracket to face Dunn and Salzwimmer.

Starting in 2022, the Roadhouse 95 tournament will become part of the Shoes and Brews series of tournaments that take place throughout Southern Nevada.

NSHPA president Lathan Dilger would like to thank Jacob at the Roadhouse 95 Saloon for hosting the horseshoe tournament.

This sanctioned tournament was a singles event that was split up into three classes.

Anita Sorenson from Mesquite took first place in the A class. This was the top group of the tournament. For her win, Sorenson was awarded the Tournament Champion patch, along with her prize money.

On Halloween, Beatty Days hosted another doubles tournament. This tournament was a little different from the tournament held on Friday. This one was not double elimination and the winners received cash prizes along with trophies.

The winner of the Sunday doubles tournament was the team made up of Steve Lopez and Mike Dedeic. Lopez is a Kingman, Arizona, native while Dedeic is a Pahrump native.

The third-place team for the Beatty Days doubles tournament was Larry Workman Sr. and Christy Russell. Both of these players are from the Las Vegas area.

Dilger would also like to thank the town of Beatty, and the Beatty General Improvement District for the beautiful horseshoe courts where the tournaments took place.