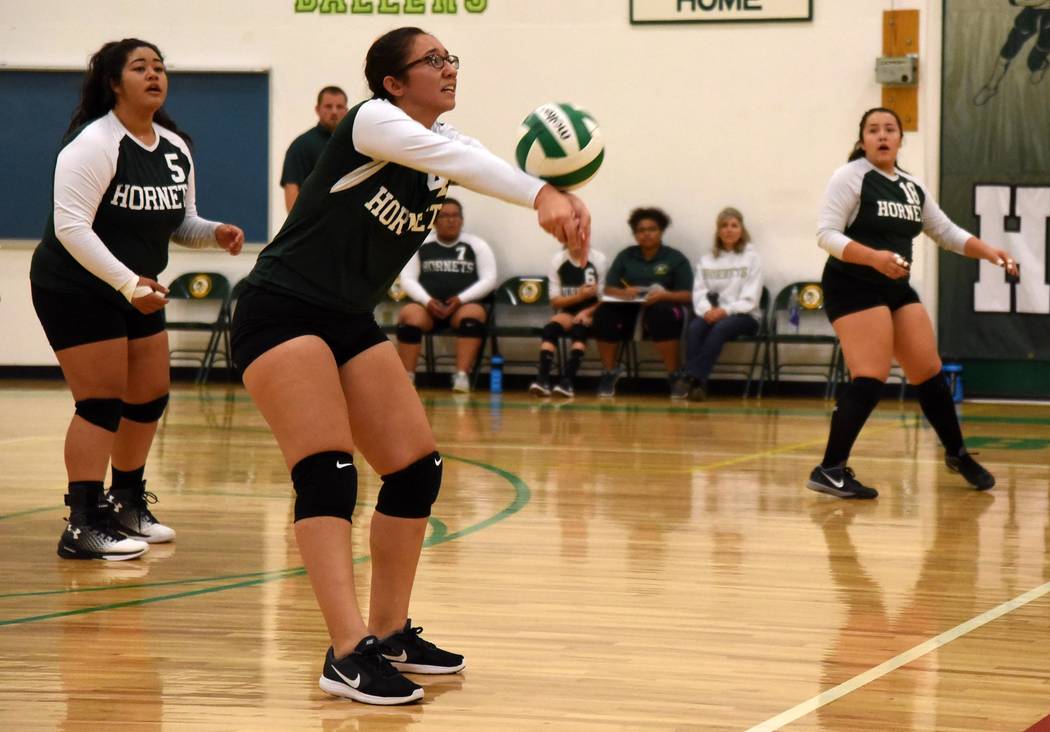 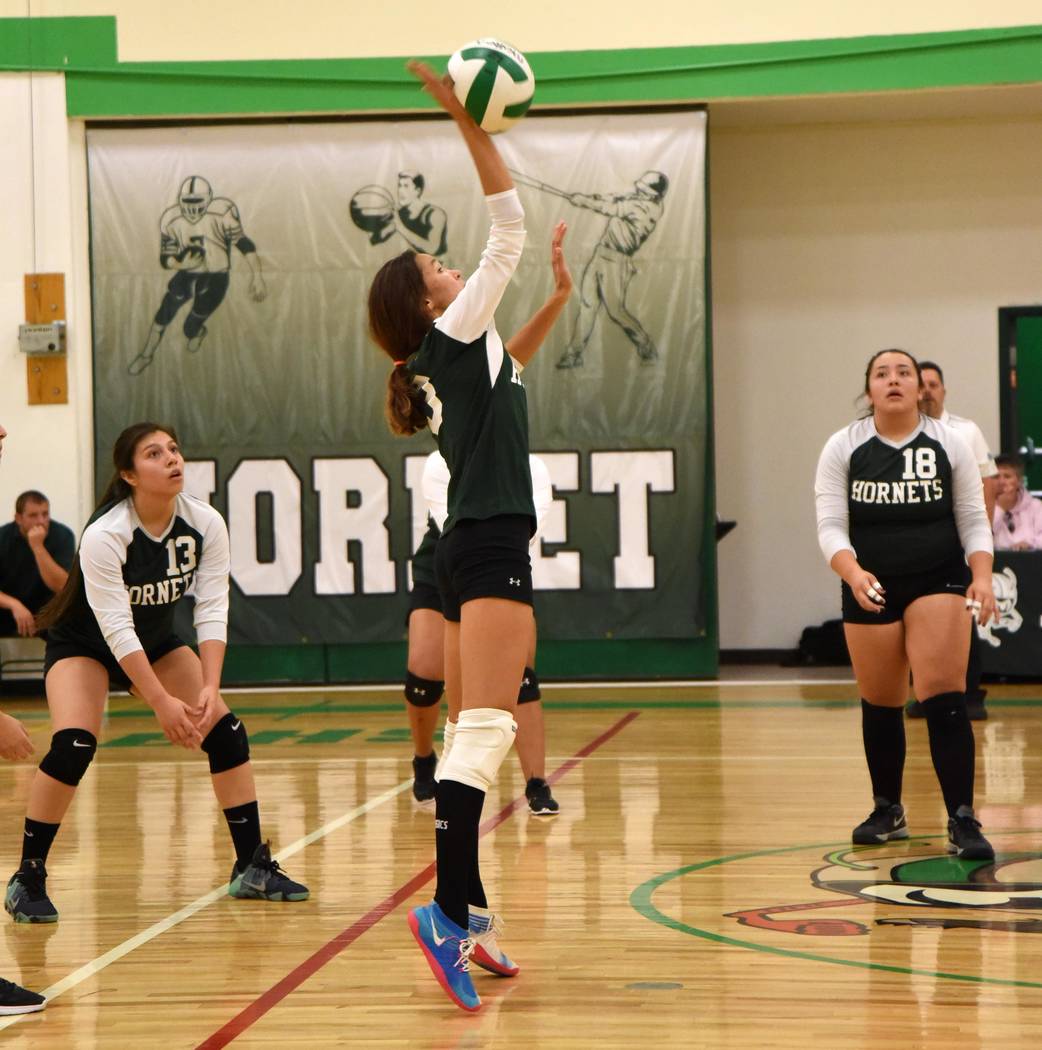 Richard Stephens/Pahrump Valley Times Sophomore Angie Altman goes high for the ball. The Hornets are improving with each match. 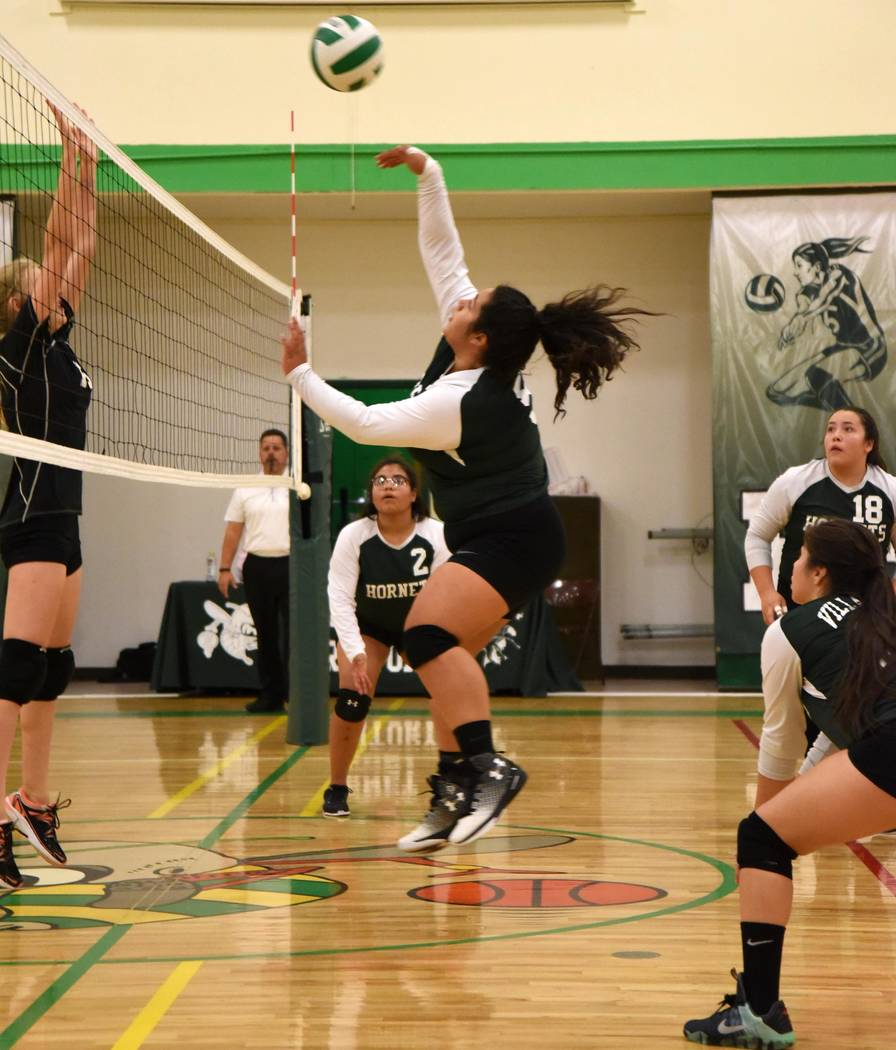 “The girls played very well against Beaver Dam,” Hornets coach Steve Sullivan said. “We were controlling our passes, getting great sets, and executing our hits. Our only shortfall was that we seemed sluggish, and it was noticeable from the beginning of the first set. We allowed Beaver Dam to set the pace.”

At one point during the match last Friday, Sullivan had to talk to his team in hopes of changing “the energy”.

“We talked during timeouts … if we didn’t take command of the pace they would catch us, and they did,” the coach said. “It was disheartening for the girls to lose the third set and it really shook our confidence for the fourth. Our net play really needs to improve to help us get to that next level.”

Sullivan said he wanted his middle girls to step up.

“Angie Altman and Adriana Gil are our two middles and they need to be contenders up at the net,” Sullivan said. “If we can continue to run our offense as consistently as we have been doing and improve certain areas of our defense we will be in pretty good shape and give a lot of teams tough competition.”

The Hornets host Big Pine in non-league action at 4 p.m. on Tuesday and then host Sandy Valley at 5 p.m. on Oct. 6.

Beatty had planned to have Homecoming on Oct. 6 during the Sandy Valley game, but that has been moved, according to Leo Verzilli, Beatty athletic director, to Oct. 13 against Round Mountain. The reason for the change was that Sandy Valley forfeited its game with Beatty.

Round Mountain then agreed to come down to Beatty and save the day.

“Round Mountain agreed to change the schedule and come down to Beatty to play,” Verzilli said. “We were scheduled to go up there and play.”

Sandy Valley forfeited all their games this year, according to the school, because they didn’t have enough players on the team.