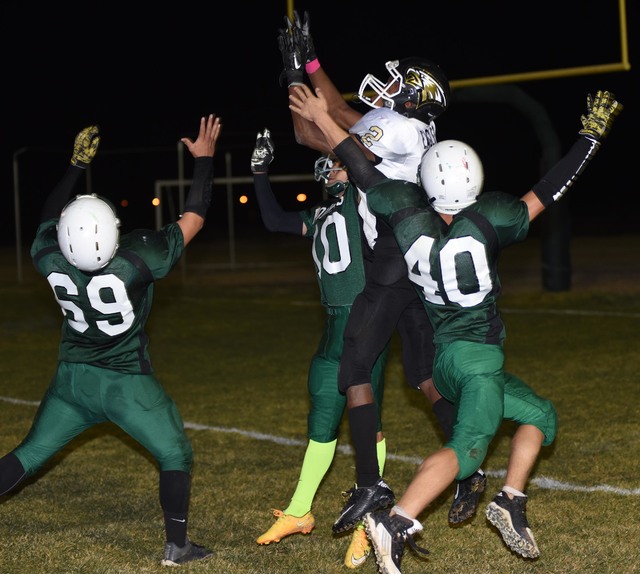 Richard Stephens / Pahrump Valley Times Beatty Hornets had 3-man coverage on this Spring Mountain receiver and he still made the catch. Nothing went right in the 41-0 loss to the Golden Eagles. 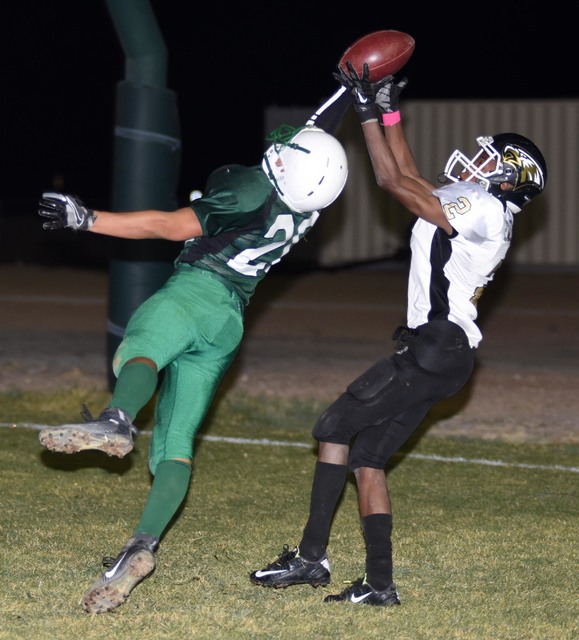 Richard Stephens / Pahrump Valley Times Jacob Oseguera gets a hand on the ball and saves a TD.

For Beatty football, what could go wrong did in their 41-0 loss against Spring Mountain last Friday. This was their first loss of the season.

This was supposed to be the year that Beatty (5-1 overall, 3-1 Class 1A Southern) was going to beat the Golden Eagles (3-2, 3-1), but it didn’t happen due to multiple mistakes, according to Hornets coach Leo Verzilli.

“We made some early mistakes and you can’t do that with good teams,” Verzilli said. “First we had a bad punt snap and they recovered on the short field for them and scored, we then mishandled a kickoff and again they scored. And finally there was a fumble recovery run back and they scored.”

Nothing seemed to go right for the Beatty offense at home.

“The offense couldn’t make anything happen because the defense was on the field too much,” James Revert, a Beatty fan, said.

“The team played hard the whole game and moved the ball up and down the field, but couldn’t punch it in,” the coach said.

Then on defense, Verzilli said his team couldn’t hold them when they needed too.

“We had them fourth down at least six times and didn’t hold for whatever reason,” the coach said.

Even when the Hornets made a great defensive play, something went wrong.

“It was 35-0, late in the fourth quarter, when (senior) Robby Revert hit a kid as hard as I’ve seen a kid get hit and still live,” Verzilli said. “He fumbles, but they recover and run 30 yards and score.”

Verzilli has moved on and is planning his Friday game as his team hosts Round Mountain for homecoming on Friday at 7 p.m.