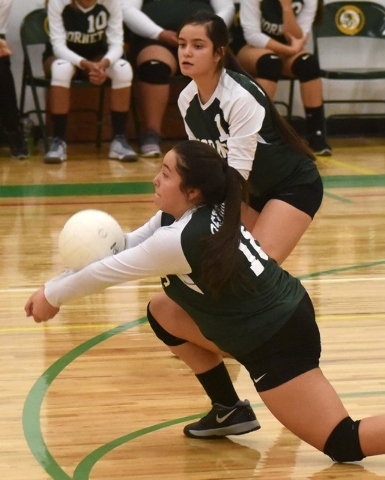 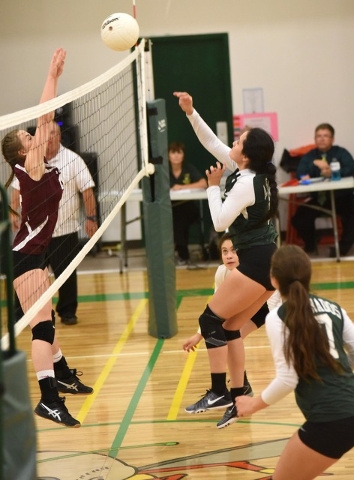 Beatty volleyball is off to a good start after winning the Trona Tournament in California. The Hornets start the season 8-1 with league play starting Friday.

“Overall there have been a lot of positives so far this season and the girls know that, but they also know there is a lot of room for improvement,” Hornets coach Steve Sullivan said. “I am very happy with how we are as a team physically and mentally. If the girls continue to remain focused and maintain a hard-work ethic, I can’t wait to see just how good they can be.”

According to the coach, most of the sets were shortened due to the tournament being only one day.

“The sets are shortened to 17 points, but in bracket play the games are extended to 25 points,” Sullivan said.

“During the Liberty match we were down quite a bit and during a timeout, we talked about how we can roll over and give up or start chipping away at the lead and hope it’s enough. Well, it wasn’t enough.”

After that game the girls turned things around, beating Trona 17-6. The Hornets then beat Apple Valley Christian 25-11, and Baker 25-12 to advance to the championship game with Liberty Baptist, which they won 25-14.

“Everything seemed to have changed for the better after that (the first loss to Liberty Baptist,” Sullivan said. “The girls seemed focused. They were running their offense very efficiently, and they were talking and moving the whole time on defense.”

The Hornets played a non-conference game against Green Valley Christian on Tuesday, which was past deadline. The girls start league play this Friday and host Indian Springs.

The girls JV team is also doing well. They traveled to Tonopah and won the Harvey Gonzales Memorial junior varsity bracket, despite a rocky start, where a mix-up in the bus schedule had the team forfeiting two games.