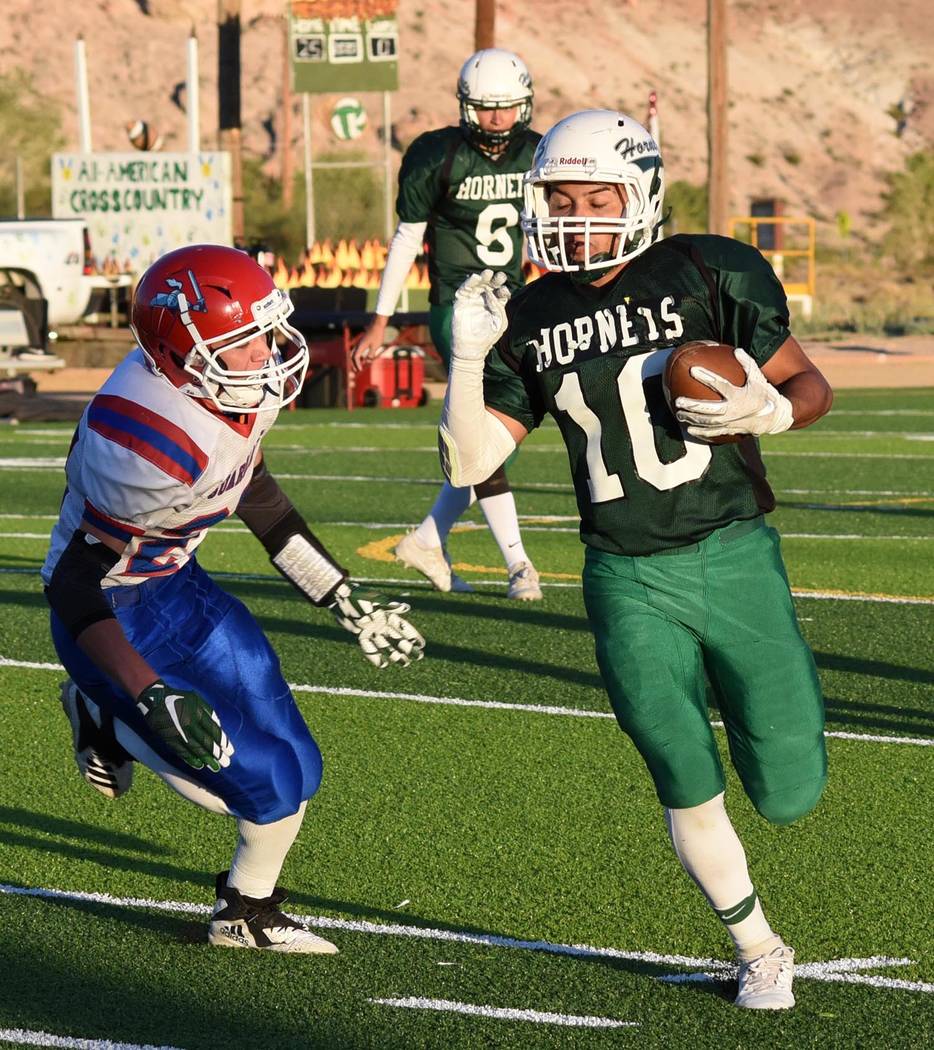 Richard Stephens/Special to the Pahrump Valley Times Junior halfback Fabian Perez rushed for 147 yards and two touchdowns as Beatty improved to 3-1 with a 40-6 Class 1A Southern win over Green Valley Christian on Thursday in Beatty. 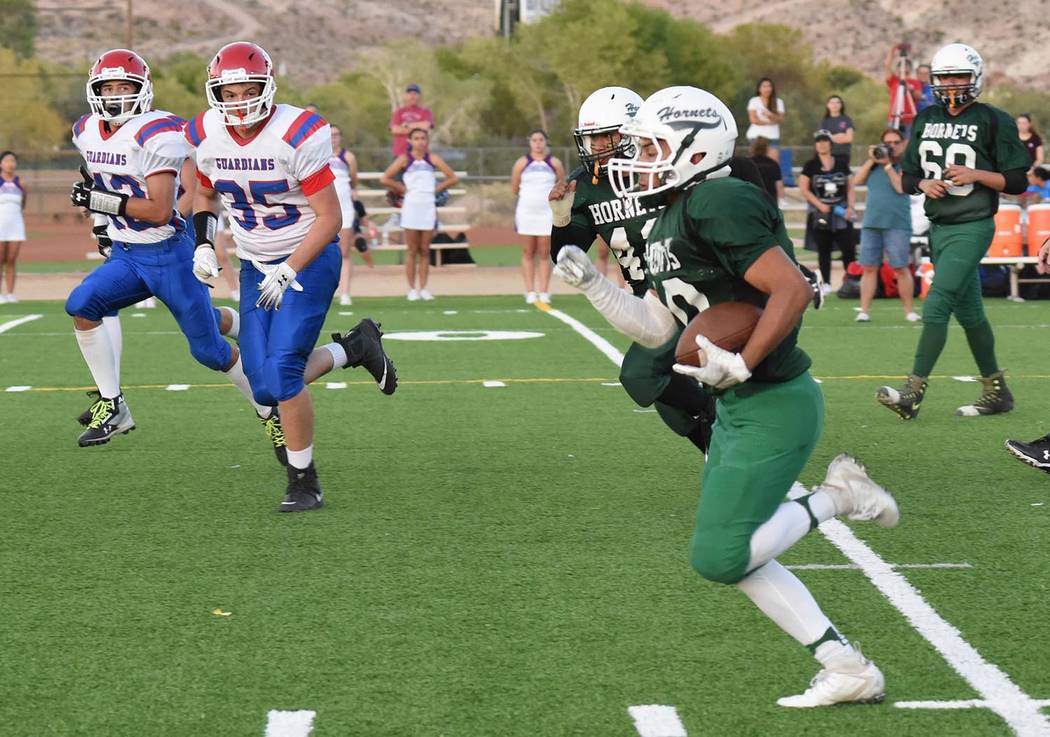 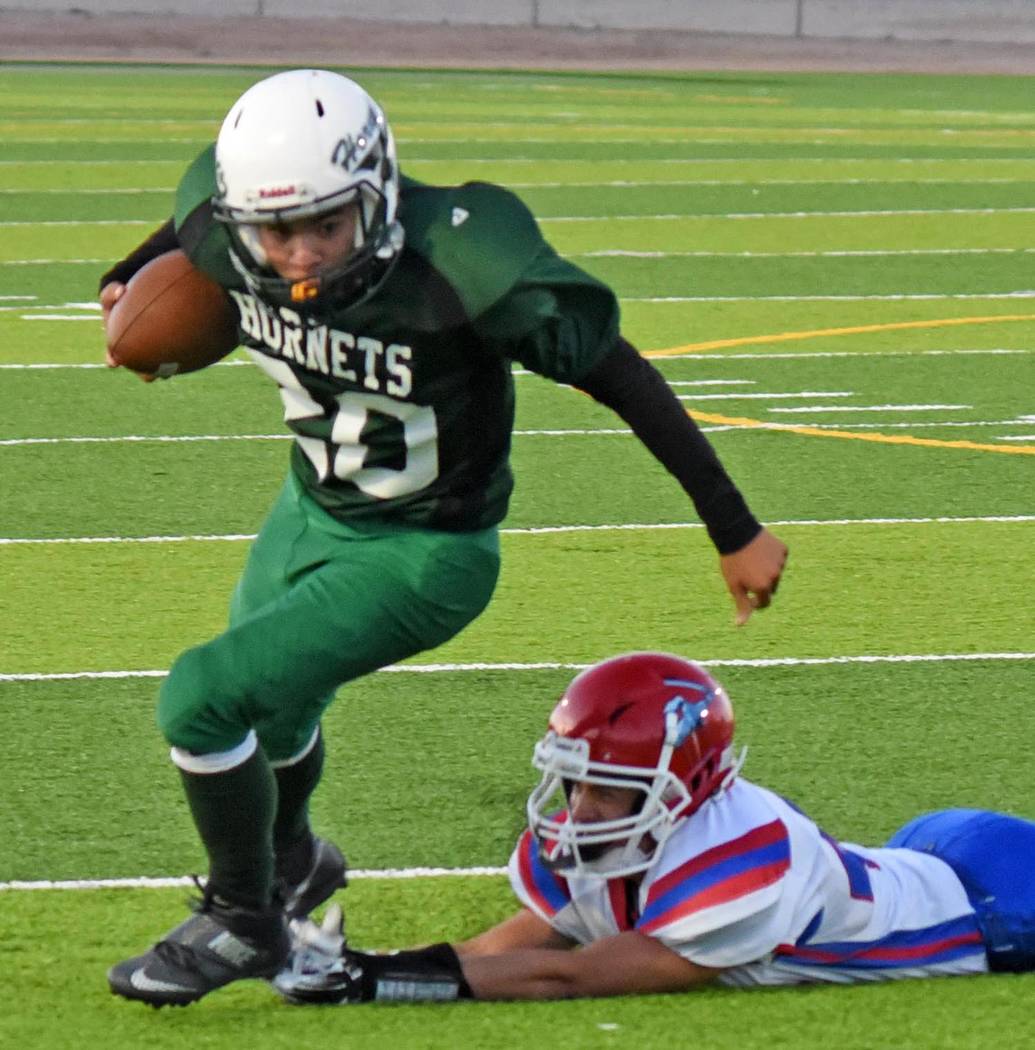 Beatty High School’s football team was eager to bounce back from its loss to perennial power Pahranagat Valley, and Green Valley Christian found itself in the wrong place at the wrong time.

Junior halfback Fabian Perez rushed for 147 yards and two touchdowns, and the Hornets’ defense held the Guardians to 160 total yards Thursday night as Beatty (3-1, 1-1 Class 1A Southern League) rolled to a 40-6 homecoming victory.

The second quarter was an utterly dominant display by the Hornets, who scored 32 of their 40 points in that period while holding Green Valley Christian (1-4, 1-1) to 9 total yards.

“Our kids had kind of a slow start,” Beatty coach Leo Verzilli said. “It was homecoming week, and their heads were all twisted. We tried to address that in the locker room, but they got off to a slow start and I wasn’t real happy at the beginning. But they got dialed in real quick.”

They certainly did. On a drive that began in the final minute of the first quarter, Perez gained 51 yards on a 66-yard march that ended with a 2-yard burst by senior halfback Alan Sandoval that, after quarterback Jacob Henry hit Geovonnie Maldonado on the 2-point conversion pass, gave the Hornets a 16-0 lead.

After the Guardians failed to gain a yard on three running plays, the Hornets took over at midfield. It took Perez two plays to cover the 50 yards, scoring on a 21-yard sweep right for a 24-0 lead. Even a helmet-to-helmet penalty against Beatty couldn’t help Green Valley Christian record a first down on its next possession, and this time it took three plays for the Hornets to go 53 yards, with Henry hitting senior tight end Max Taylor in the end zone for a 24-yard score.

It was the only pass Henry would complete all day. Of course, he only threw three.

It didn’t get any better for the Guardians, who fumbled on their next possession. Taylor recovered the ball at the Green Valley Christian 25, and this time it took one play for Sandoval to go up the middle, spin away from a would-be tackler and break into the clear on the right side for another Beatty touchdown.

Sandoval only touched the ball six times but gained 47 yards and scored twice.

“They didn’t tackle very well, but our runners run hard,” Verzilli said. “Our one mission with our running back is one guy doesn’t tackle you. We’ve got to make that one guy miss.”

They do, and they do it often. Perez and Sandoval, as well as Yadir Rodriguez before he was injured in a motorcycle accident, are speedy and elusive runners.

“Like our coach said, I’d pay to watch Fabian Perez and Alan and Yadir run the ball,” Henry said. “I trust everybody on my first-team offense, and I trust everyone on defense, too.”

“I feel like our defense is the stronger side of our team,” said Taylor, a linebacker on that side of the ball. “I think the strength of our defense really comes from the linebackers. That whole back four really steps it up at game time.”

And the defense kept the Guardians out of the end zone until the fourth quarter, by which time a running clock was in effect. Junior quarterback Collin Killoran broke the shutout with a 5-yard pass to freshman Clayton Suiter with 10:25 left in the game, capping 58-yard drive aided by a face mask penalty against the Hornets.

Beatty took an 8-0 lead on its opening possession, with Henry keeping it three times for 24 yards, then keeping it again for the 2-point conversion after Perez scored from 1 yard out. The Hornets quarterback just plowed up the middle, and the Guardians had no more luck stopping him than they did stopping Perez and Sandoval.

“I just stick my nose in my center and run,” said Henry, who finished with 33 yards rushing, all in the first half. “We’ve been working this week a whole lot on the offensive line and their blocks, because we needed to work on that from seeing last week.”

A lot of lines struggle against Pahranagat Valley, and the Hornets did not play as poorly as the 58-22 score suggested. But Green Valley Christian was not nearly the foe the Panthers were.

“We’d never seen them before,” Verzilli said. “I made a few phone calls and got a couple of tips on what they might be like, what kind of defense they ran. And they came out in what those guys told me, so that was good to know. We didn’t have to go in blind.”

Next up for the Hornets is a trip to Beaver Dam, the only team to lose to Green Valley Christian this season. It’s the following week’s game, a trip to Spring Mountain, that will pretty much determine if this talented group of Hornets can get into the postseason; the top two teams in Class 1A South will qualify for the playoffs.

At least one Hornet is confident.