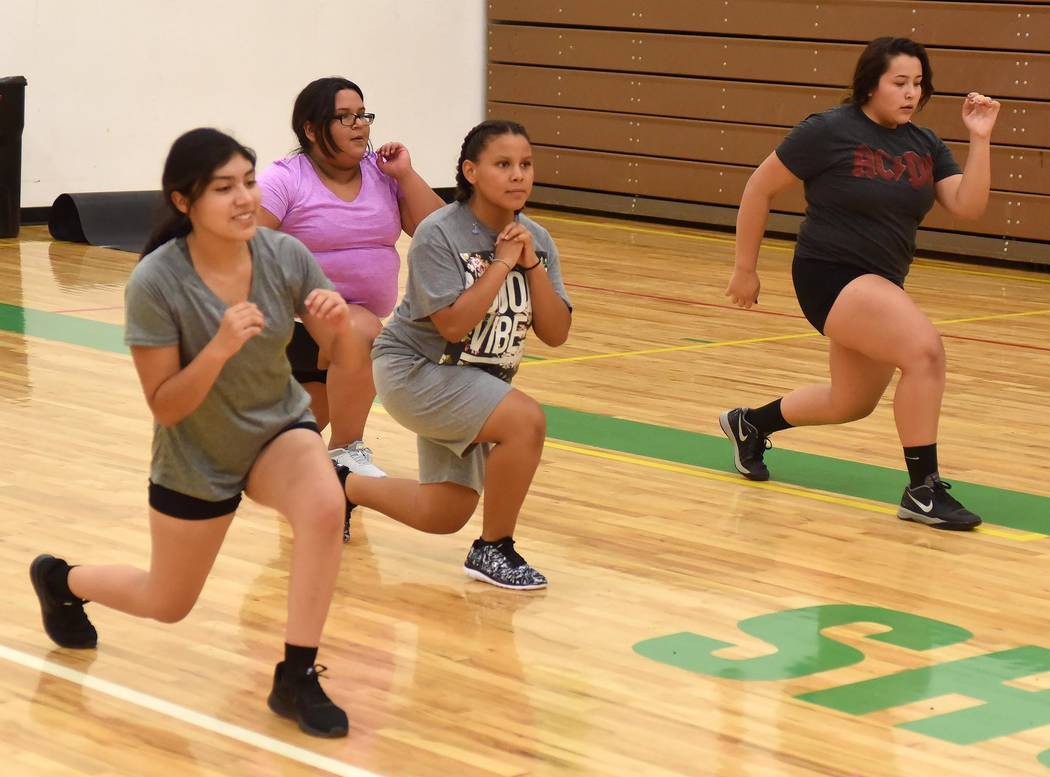 Volleyball has started for the Beatty Hornets. The girls are seen doing drills in the first week of August. From left to right: Jocelyn Hernandez, Maria Lopez, Evelyn Moreno (back), and Ari Oseguera. The first scheduled home game for the girls is at 7 p.m. on Sept. 15 against Tonopah.

Beatty High School Hornets volleyball will be rebuilding this year, after three state appearances in a row.

The team lost six seniors from a team of nine players from last season.

Hornets coach Steve Sullivan says this translates into a lack of skill at key positions.

“Our weakness this year is going to be experience at the varsity level,” he said. “We have three returners, two of which are starters. Our strength is going to be the fact that we’re young and eager to grow.”

The veteran players returning are Ari Oseguera at outside hitter, as well as Maria Lopez, also a hitter. Karina Villanueva will return as the setter and this is key for the team.

Ed Kirkwood, a former Trojans volleyball coach with more than 40 years of coaching high school and college sports, said a good setter is like a good quarterback.

“Your setter is the QB on the court,” Kirkwood said. “They dictate where the ball is going on every play. Cross court, middle or back set. They call the play while they await the serve. In respect to having a player returning, you want that person to be a setter. Then a libero, then a hitter. You can always develop a hitter. But a setter and a defensive specialist (libero) take a year or better to develop.”

So the news for Beatty is not bad. In fact, Sullivan couldn’t find a bad vibe on his team.

“These girls are really excited to get on the court to find out what our abilities are,” the coach said.

The coach is also encouraged by the numbers.

“We will have about 20 girls this year,” he said. “Stepping up this year will be Adriana Gil at middle and Sandra Garcia at outside. We will have a few girls working out at various positions to see where they fit best in regard to their skills and abilities. Our varsity roster won’t be as deep as it was last year so all the girls on the varsity squad will get a lot of playing time and gain a lot of experience.”

The first scheduled action for the young team will be an away game. The girls travel north to the Yerington Tournament on Aug. 25-26 and then they travel to the Trona Tournament on Sept. 2, which is the following week.

Their first home action according to their schedule is against Tonopah at 7 p.m. on Sept. 15.