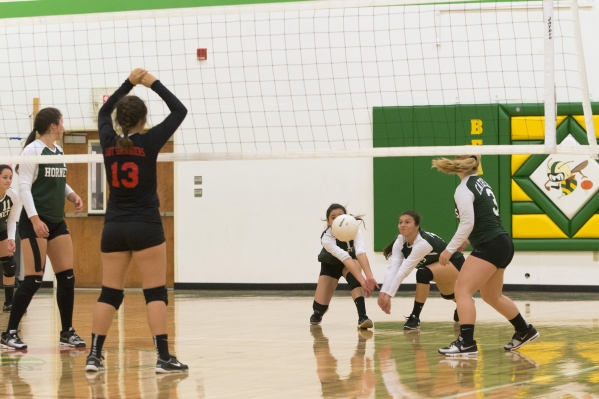 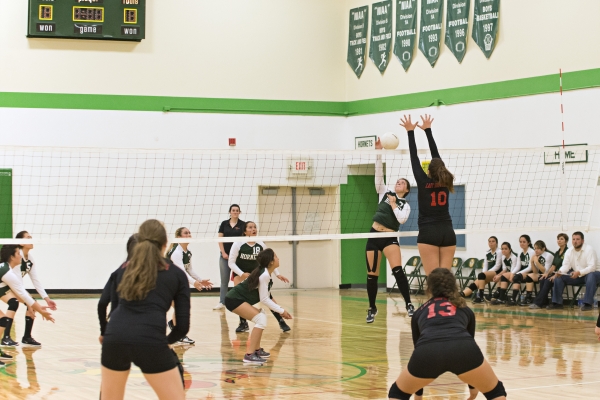 They had lost to Sandy Valley during the regular season in three straight sets and so when the Hornets gave up the second set to the Sidewinders, fans may have been thinking that the Hornets didn’t have enough juice to win the whole thing.

Hornets coach Steve Sullivan had different thoughts. He said that first game against Sandy Valley was not his team. He believed that his girls could play better and they proved it on Saturday by beating the same team in four sets, 25-23, 15-25, 25-22 and 25-17.

“It was more what I knew about our girls that we could beat Sandy Valley,” Sullivan said. “I knew we had more of a complete team with more threats offensively.”

Sullivan saw that Sandy Valley had an Achilles heel.

“Sandy Valley is centered around their tall middle hitter who likes to tip more than attack the ball,” he said. “We worked on making sure we get to our spots defensively to eliminate that threat and focused on being able to wear down Sandy Valley’s defense.”

The coach said his team won the first set after coming back from an eight-point deficit. He then said his team let Sandy Valley bounce back and the Sidewinders beat his girls by 10 in the second.

“The girls knew we gave them that one and decided that one was enough,” Sullivan said. “We also discussed how we needed to start targeting our hits and our serves at their middle hitter to wear her down. We knew if we could tire her out then the rest of their team would falter and it would make our job a lot easier.”

He said the attack was successful most of the time and when it failed “we knew to stick it out and volley because we could outlast them.”

Sullivan believes the biggest concern is to work on the mental and emotional side of the game.

“Moving forward, the competition will be stronger and the volleys will be longer,” the coach said. “If we find that confidence that we rightfully deserve to have and continue our willingness to fight to the end for every last point, then we will make a run to the very end.”

Those that remember last year when Beatty made it to state might be thinking “deja vu.”

After all, the Hornets did the same thing last year. They played Sandy Valley in the regular season and lost and then eliminated them in the playoffs. They lost the regional championship to Alamo and then went on to play Smith Valley in the state semifinals.

Another key factor for Beatty is their personnel. This year Smith may have a harder time beating the Beatty girls because the core of the Hornets is made up of juniors that have been playing together since they were freshmen: Anel Gamboa, Vanessa Gamboa, Claudia Granados and Alexia Gil. These girls all have three years of experience playing together.

In 2012 Tonopah was the last team to beat Alamo. The Muckers lost to Alamo in the regular season but then beat them twice, once for the regional title and once for the state championship.

Faith Lutheran and Sierra Vista will be the two top teams that will advance to the state playoffs.

The state playoffs will be held at Foothill High School in Las Vegas.

The Division I-A finals will be held at 4:45 p.m. on Saturday at Foothill High School.