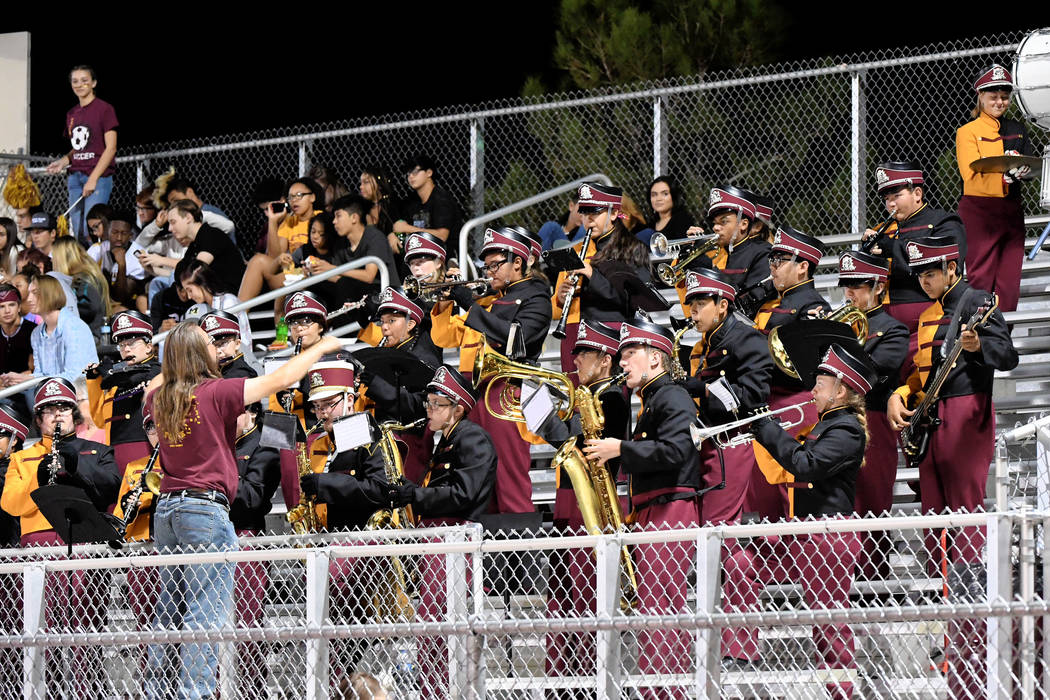 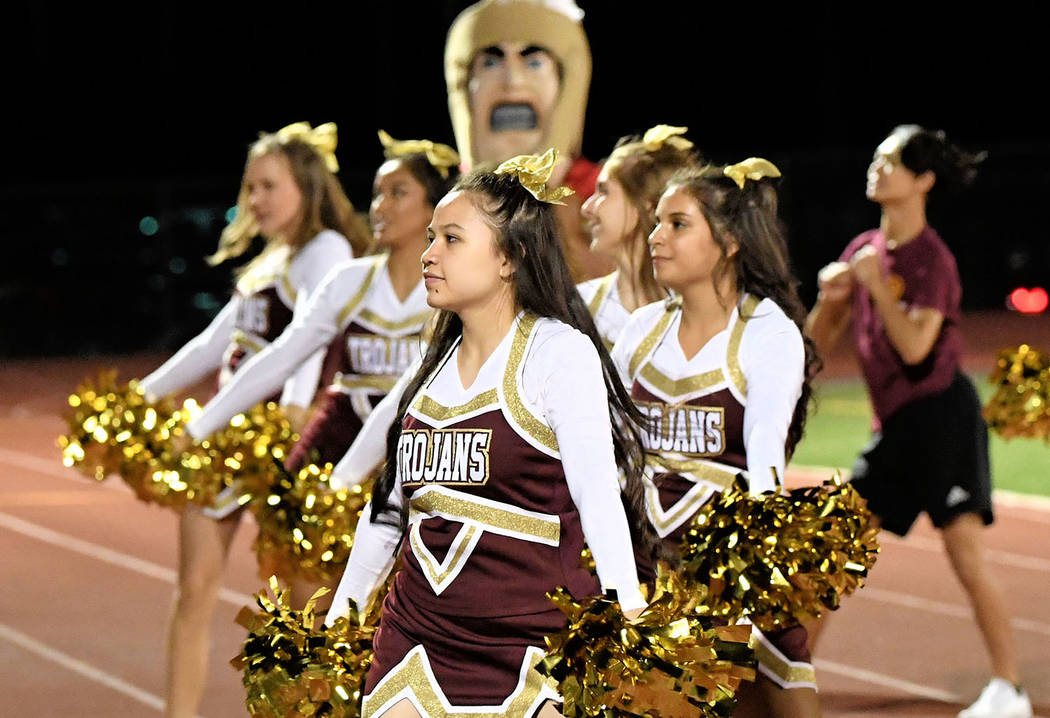 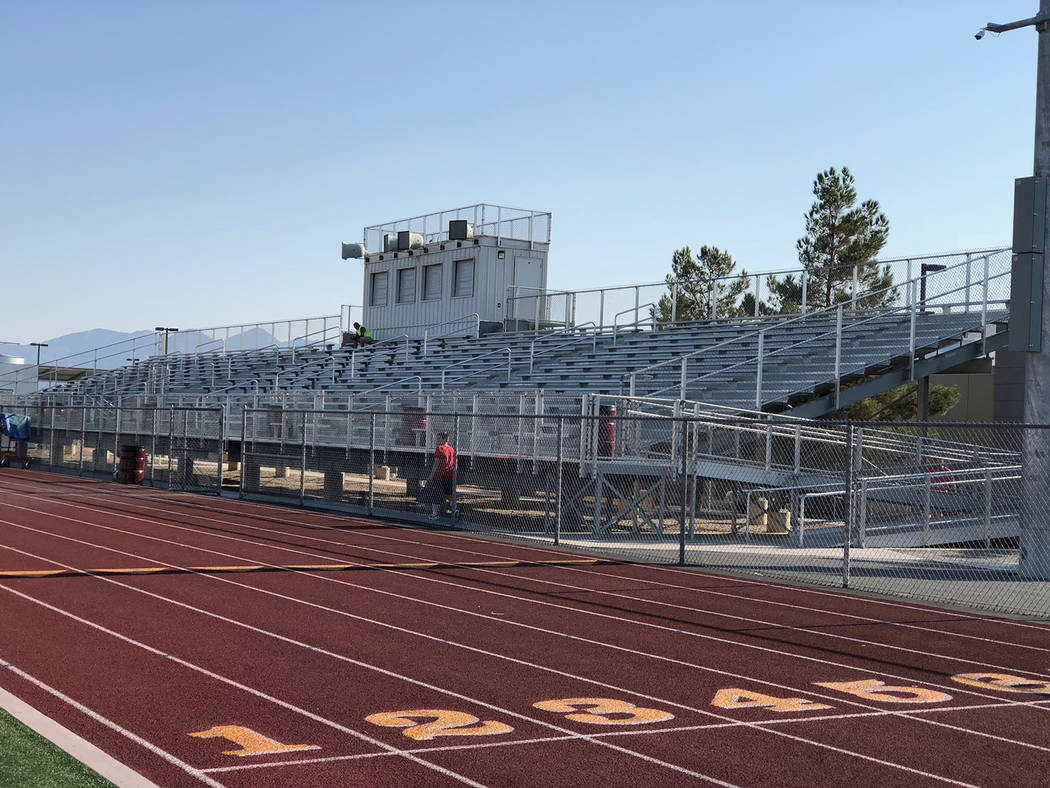 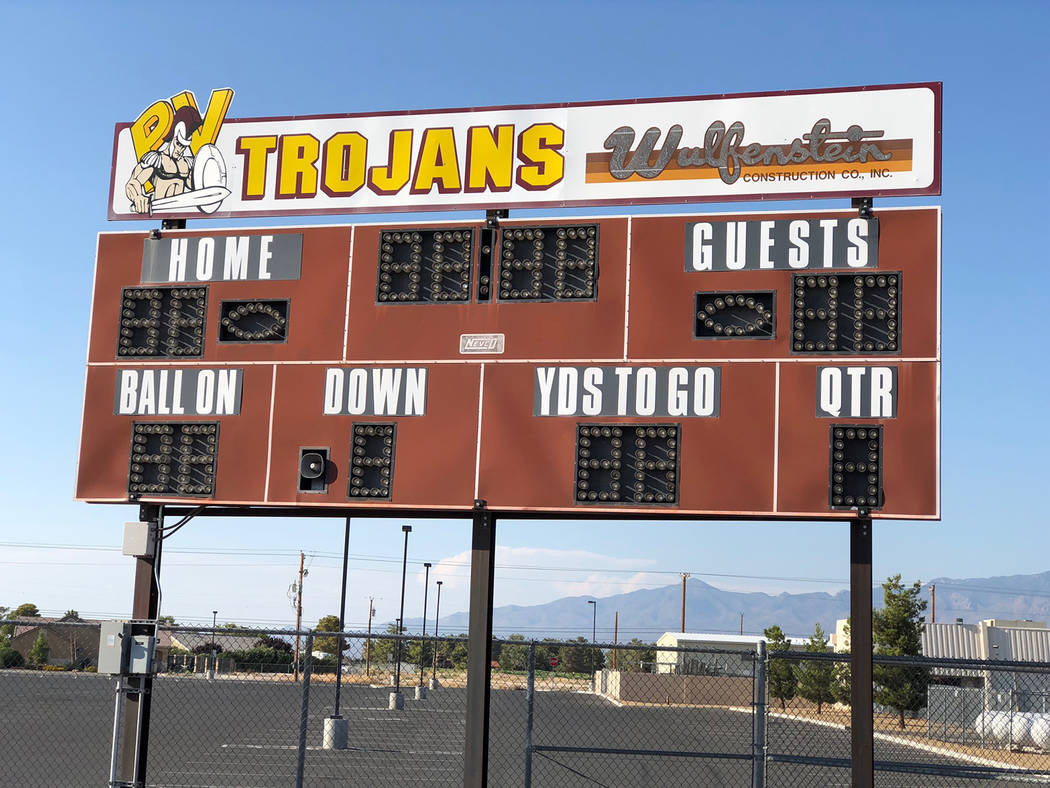 The first home football game of a season is always a big event, but it’s especially huge in Pahrump, with the potential for an overflow crowd at the high school’s stadium. And the home fans often get what they come to see.

“If you look back at our home record, it’s pretty solid over the last few years,” Pahrump Valley football coach Joe Clayton said, and he’s right. Since 2012, the Trojans have compiled a 22-36 overall record, but they are 15-13 at home.

“We play really well in front of our home crowd,” Clayton added. “They get a little bit of extra energy, extra adrenaline because of the home crowd.”

While football players were on the artificial surface of the football stadium for a recent practice, the cheerleaders were inside practicing routines, the strains of the “Notre Dame Victory March” could be heard from the band practicing beyond the outfield fence of the softball field, and Cindy Colucci was hurrying out of the school with bags of T-shirts for the concession stand workers.

Colucci is president of the Pahrump Valley High School Booster Club, and the club runs the concession for all Trojan sporting events.

“We do one-third-pound, all-beef hot dogs from Sam’s Club Cafe, we do the hot dog buns from Sam’s Club Cafe,” Colucci said. “We also do cinnamon sugar or salt and mustard for large, soft pretzels. We do nacho chips, the round tortilla chips, with chili and nacho cheese sauce. We do a cheese chili dog, too. We do quarter-pound hamburger patties with cheese and lettuce, tomato, onions, mayonnaise, mustard, ketchup and relish on a brioche bun.”

Plenty of snacks also will be available, she said.

“We do popcorn, buttered movie-style popcorn,” Colucci continued. “And we do all of the Pepsi products in bottles, including water and Gatorade. And we do loads of different kinds of candy, chocolate and otherwise. And we do chips and crackers and cookies and well, you name it, we’ve got it.”

Colucci said the club will sell between $1,500 and $2,500 worth of items during a varsity football game.

While the football team isn’t carrying quite as many players as Clayton would like on the varsity roster, the band’s numbers have improved somewhat, according to Michael Wineski, the school’s band director.

“When I first started there were maybe 27, now we’re up to 38,” the third-year director said. “The students do a very good job of trying to recruit their friends who they know play instruments.

“I know there are a lot more students here that do play instruments that for whatever reason can’t fit it into their schedule, so I just hope numbers keep going up.”

Wineski said the band lost nine seniors last year after losing only one after his first year, and only five freshmen came out to replace them.

“This year I think I have 13 seniors, so we really have to do a lot of recruiting,” Wineski said.

The band had a band camp for two weeks before school started, and with school in session they do afternoon rehearsals twice a week for about an hour and a half, Wineski said. After football season, there are concerts for Veterans Day and the holidays with, if fundraising goes well, a trip to Hawaii in between.

Wineski said the band has been approved to travel to Pearl Harbor for a parade as part of a five-year commemoration of the 75th anniversary of World War II. The trip is budgeted for $80,000, and thus far less than one-fourth of that has been raised.

Wineski said anyone interested in helping the band get to Pearl Harbor can bring cash or a check made out to Pahrump Valley High School to the school’s main office.

But right now it’s about Friday night, and everything appears to be ready for the Trojans to take the field for their home opener. Game time against Virgin Valley is 7 p.m.