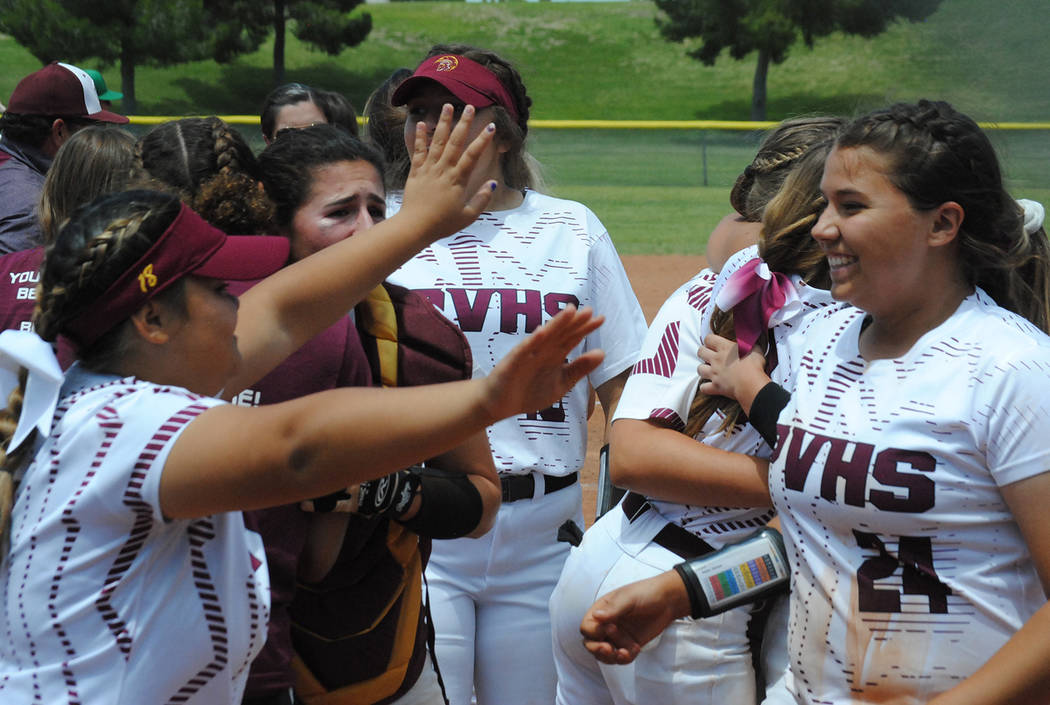 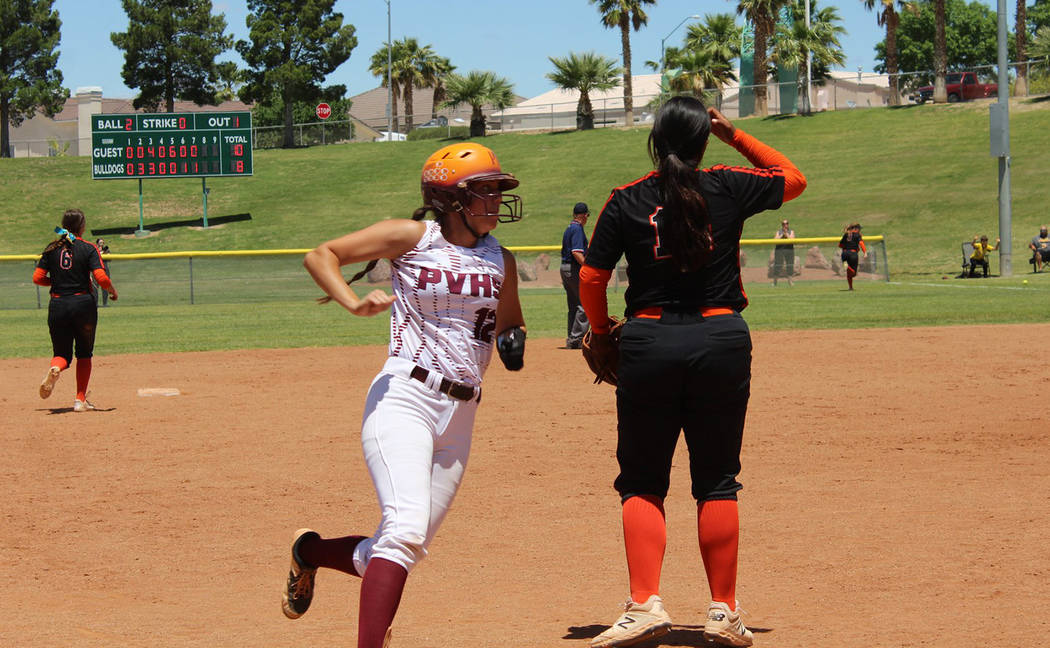 Cassondra Lauver/Special to the Pahrump Valley Times Pahrump Valley junior Kaden Cable rounds third on the way to scoring the tying run as Fernley's right fielder chases down Skyler Lauver's 2-run double in the bottom of the seventh inning Saturday in the Class 3A State Tournament final in Mesquite. 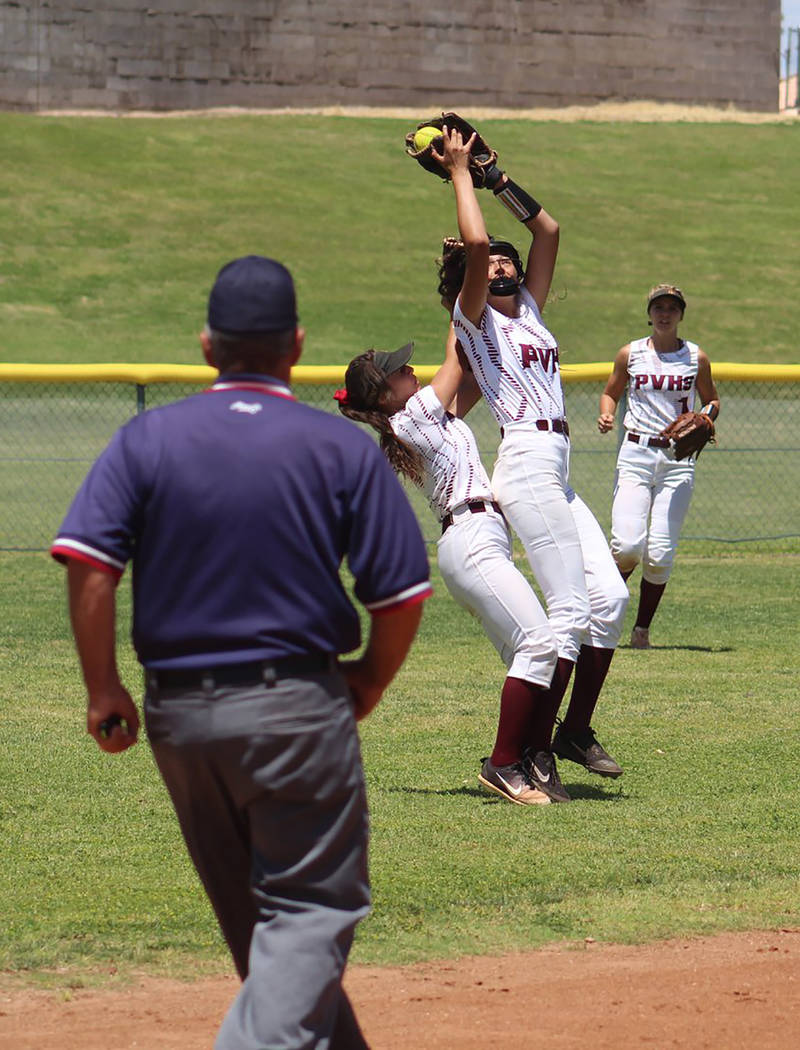 Cassondra Lauver/Special to the Pahrump Valley Times Nicky Velazquez catches a pop fly while Kalea Whitney, left, avoids a collision during Pahrump Valley's 13-10 win over Fernley in the Class 3A State Tournament final Saturday at Virgin Valley High School in Mesquite. Center fielder Terrena Martin is in the background.

From the moment the ball left the bat, Kaden Cable’s teammates knew it was gone.

“We knew,” senior Jackie Stobbe said. “It was Kaden, and she’s known for hitting home runs in practice, so we knew.”

But this was no practice. And when Cable’s moon shot fell gently onto the grass beyond the fence in left field, the Pahrump Valley High School softball team had its first state championship since 2005.

“I knew it was my pitch, so I swung at it,” Cable said. “It was two outs, the bottom of the eighth. It’s extra innings, and it just feels so great to be able to get that clutch hit.”

It didn’t look as if there would be any clutch hits after the top of the fifth, when the Vaqueros used a 2-run single, a 2-run double and a dropped fly ball in the outfield to push across 6 runs and take a 10-6 lead. It looked like trouble, unless you were on the Pahrump Valley bench.

“We just know we had it within us,” said Hannah Cuellar, who pitched the first three innings. “And we always know that when we’re down we can get back up.”

Trojans coach Cassondra Lauver knows her team well and had much the same feeling.

“I believe in our girls, and I think they believe in themselves,” she said. “We were a little bit stressed when they got ahead of us, but just having people come up and get clutch hits, the aggressive baserunners and just playing the game smart are qualities we all knew we had within us.”

Now the Vaqueros know it, too.

The Trojans pulled within 10-7 in the sixth when Terrena Martin led off with a double, moved to third on a Skyler Lauver single and scored on a single by Ally Rily. Stobbe singled to load the bases with nobody out, but a pop to the catcher and an unusual 1-2-5 double play — at first ruled safe at third by an umpire who apparently forgot it was a force play — ended the threat.

Undaunted, the Trojans came back in the bottom of the seventh after Ally Rily held down Fernley in the top of the inning. Bartley reached on an infield single, then Hailey Cuellar launched a ball to deep right field that was caught and dropped. Cable singled home Bartley and, after a ground out, Lauver came up and pulled a double to right, scoring Cuellar and Cable to tie the game.

“Honestly, it wasn’t the best swing I had, because my hands got a little bit out more than they should have been,” Lauver said. “But it was really good for me because I’d been struggling this state tournament.”

Rily held down the fort in the top of the eighth, and the Trojans were in business quickly in their half of the inning when Kareena Nelson’s rocket toward second somehow eluded the fielder’s glove. Nelson wound up on second. It looked as if the Vaqueros would get out of it as Nelson was still standing on second base two outs later, but Hailey Cuellar drew a walk to bring up Cable.

Despite her displays of power in practice, Cable never had a game-ending blast like that before. But she got one this time, lofting a high fly ball over the fence to ignite pandemonium on the field.

“It couldn’t have come at a better time,” Cable said.

The blast capped a rally in a game the Trojans didn’t even need. Coming out of the winners’ bracket, they needed one win for the title, while the Vaqueros needed to beat the Trojans twice to bring the trophy back up north.

“We didn’t want to play that second game,” Rily said. “We wanted to be one and done, state champs, and just seal the deal.”

“We didn’t want the second game,” catcher Deeanna Egan agreed. “We knew we were going to win the first game.”

Cable had a monster day, going 4-for-4 with 7 RBIs and scoring twice. Lauver and Stobbe each had 3 hits, while Stobbe, Nelson, Bartley and Hailey Cuellar each scored 2 runs. Rily pitched the last 4 innings to earn the win, and only 4 of the 10 runs allowed were earned.

The Trojans (30-11) won 12 consecutive games to end the season, including 7-0 during the postseason. Defeating Lowry in their first state tournament game Thursday snapped a 6-game losing streak against Northern Nevada teams in the state tournament; now they have won three in a row.

“We were so positive and so excited to be here, that we just knew no matter what happened we were going to be the winners,” Stobbe said.

“There were a few moments when I would see the intensity in their eyes, the complete focus,” Cassondra Lauver said. “A lot of them taking a deep breath to prepare themselves for the at-bat. But they just battle.