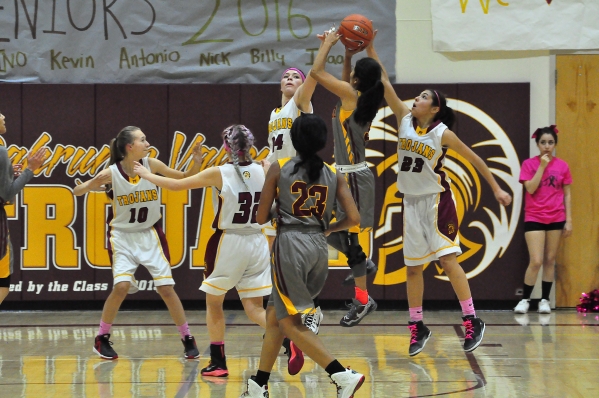 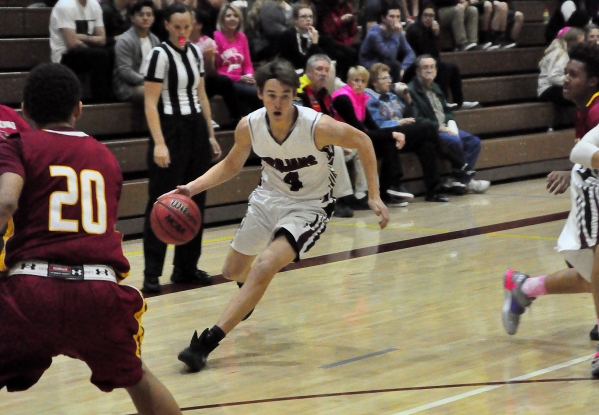 The Lady Trojans were blown out by fourth-place team Cheyenne on Tuesday, 58-28.

The game was an uphill battle for the girls from the start and the Desert Shields had a 30-14 lead at the half.

The Trojans’ (1-13 overall, 0-11 Sunset League) lead scorer was senior Lauren Ashford with 11, who has been pretty consistent. Bethany Calvert had 7 and freshman Sabin Chaidez had 4.

The Trojans were outmatched by the speed of Cheyenne, who seemed to steal the ball at will. The turnovers prevented the Trojans from mounting a comeback after the half.

By the end of the third quarter Cheyenne had increased their lead to 42-21. In the third, Chaidez went down when she crashed into the gym wall while going after a ball. She never returned and more than likely will be out for Thursday’s game against Mojave, which was past deadline.

The Trojans boys basketball team was routed by Cheyenne 74-33 and never was in the game.

The Desert Shields defense picked off the first four passes from Pahrump and in the first minute the Trojans were unable to get the ball past the half-court line. At that point, Cheyenne was ahead 10-0.

Cheyenne’s defense was tough. Pahrump (3-16, 1-10) struggled to shake the full court press in the second quarter and the Trojans still had problems with the Cheyenne zone due to their quickness and skill in the second half of the game.

By mid-second quarter, Pahrump was behind 31-5 and had gotten all five points by free throw.

The boys played Mojave (10-9, 4-6) on Thursday, which was past deadline and then have two more road games against Western (14-19, 2-9) on Friday and Bonanza (non-league) on Monday before returning home to finish the season against Spring Valley (8-10, 3-7) on Wednesday.