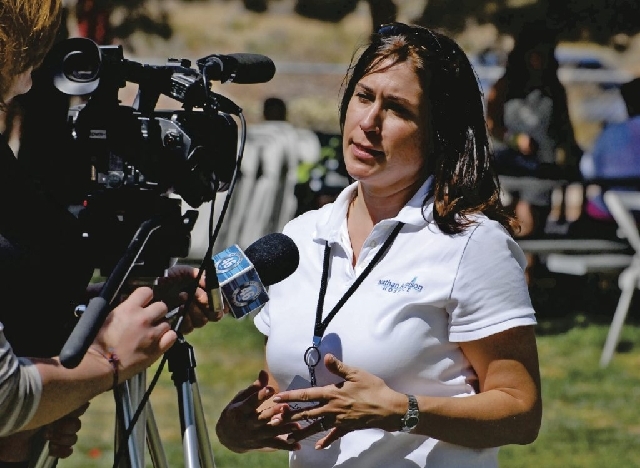 For the past year, the door to the Trojans Cheer Program has said, “under construction.”

Tyann James is the third coach in less than a year. Last year was split by Jennie Salmon and George Arceo.

James works for Nathan Adelson Hospice here, where she is the community outreach representative. Her husband is an electrical contractor and her family has lived in Pahrump Valley for five years.

The family moved here looking to build and she said they are here to stay.

James said she got into to cheerleading because her daughter participated in it as a freshman. When Salmon started coaching, James said Salmon asked for some help on the away trips. It meant James had to get some certifications so she could help out. One thing led to another and now she is the head coach.

“I saw a need when George was not able to do it after basketball. I had my certifications and just finished the process,” James said.

Unlike some of the coaches with a son or daughter in the program, James said her daughter will not be with her. She will be on the dance team this year as a junior. James said she is coaching to keep the program going.

James was a cheerleader herself as a teen in Spokane, Wash. Although it was some time ago, James said there are things you just don’t forget.

The new coach wants her girls to set the tone for the squad. At the moment, there are nine varsity cheerleaders for football and eight junior varsity.

The new coach has an assistant, Heather Battaglia. Both coaches have their stunting certification — something the past two coaches did not have. This will allow the girls to return to more of a stunt-oriented program.

“My goal is to have them stunting and tumbling. This is where my head is at. The girls, the crowd get so energized from this when they can see those stunts. It is just the matter of safety. As long as the girls pay attention when we are teaching them, we will do as much of that as we can,” she said.

James is not afraid to ask for help. In fact, she has been studying cheer with Professional Cheer Services in Las Vegas. She said the service offers weekend workshops for coaches on Sundays and it is where she has spent a lot of time.

“We are hoping to use this company a lot because we really believe in what they teach and how they teach it,” she said. “We want to carry this over into the high school program.”

Eventually, the coach wants the program to be a competitive, but she said it will not happen in one year.

“I plan on staying with the program for years, and hopefully my assistant does as well. I am building a program. I also want to work with the middle school. I am trying to keep it to simple things and to move it forward slowly. I would even like to have cheer for wrestling. Maybe next year. Our wrestling team is great and they deserve cheerleaders too,” James said.

“It takes money to run a good program and to get the things that keep the girls safe. We can’t do this without the community. We need some tumbling things and certain pieces of equipment,” concluded James.

The new team will have its camp from August 8-10.