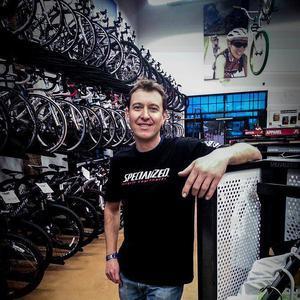 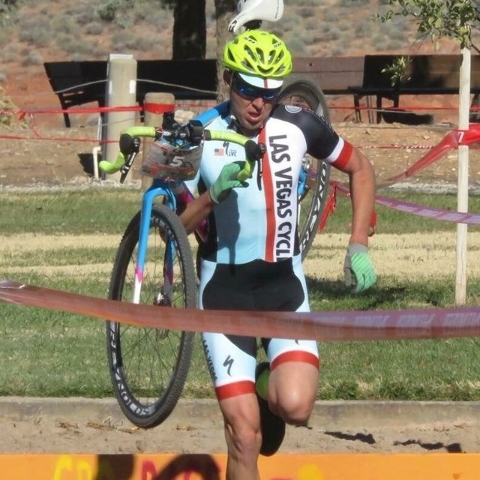 Special to the Pahrump Valley Times Steve Clausse, competing in a cyclocross event in St. George, Utah. Clausse is helping organize the Nevada Cyclocross state championship in Beatty this year.

Cyclocross is coming to Beatty this winter. It sounds like some kind of new-fangled gadget or even a cult, but it’s neither. Instead, it’s a budding new sport in the U.S.

The sport is all the rage in Europe and is growing in popularity in America.

A typical cyclocross event in Belgium can easily draw a crowd of 25,000 fans, according to Velonews. America is not quite there yet. Some places draw 5,000 fans, if lucky.

It was developed in Europe in the early 1900’s as a way for road racers to remain fit during fall and winter.

A typical course runs around 1-2 miles and the race could last an hour. The terrain is varied and includes hills, grass, pavement and some dirt. An interesting aspect is that most courses require cyclists to overcome obstacles that require them to dismount their bikes and carry them through the obstacles.

But it’s not in Pahrump

A cyclocross bike is between a mountain bike and a road bike and very versatile, according to Mark Tucsnak, owner of Bicycle Warehouse of Pahrump.

“In Pahrump they are a great bike to ride out here, for the conditions are just right for them,” he said. “They can ride on dirt or the road and are very fast. It’s just a neat piece of equipment.”

These bikes weigh anywhere from 18-23 pounds.”

Despite the quality of the bike, they aren’t flying off the shelf in this town.

“I never sell cyclocross bikes out here,” he said. “The sport isn’t on the map out here.”

When told that cyclocross was coming to Beatty, Tucsnak was not surprised. He not only sells bikes but he himself spent years as a professional and semi-professional, racing road bikes and still competes as often as he can. He even has a mountain bike and was personally invited to Spicer Ranch to ride the new trails.

“Spicer (David) road twice with us,” Tucsnak said. “I send people up to Beatty to ride all the time and they have a wonderful time. It truly is a wonderful thing and a wonderful spot in the desert.”

So the sport many not be popular in the valley, but just to the east of us in Las Vegas, organizers for one of the biggest cyclocross events in the Southwest are getting ready for Cross Vegas.

Enter Steve Clausse, a former Belgian professional road biker from the 90’s. Clausse lives and breathes the sport and believes in it. He will be riding in the Cross Vegas event on Sept. 21 as an amateur at the Desert Breeze Soccer Complex.

This cyclocross rider also has a Pahrump connection, his wife is from the valley.

At this event, fans will see their favorite riders up close and personal.

“The racers will pass by them at least 10 times during the race, Clausse said. “The sport only had 10 riders ten years ago in Las Vegas, and now we are around 50 strong. The Vegas event will attract 100 professional riders for the invitational and 160 amateur riders from all over.”

In Orange County California, Clausse said the sport is growing even faster with more events and at least 10 teams to Las Vegas’ one.

He said the sport has grown in the Southwest through the efforts of the Southern California and Nevada Cycling Association.

“This association throws events throughout California and Southern Nevada,” he said. “And through this organization we are hoping to bring the Nevada Cyclocross State Championship to Beatty sometime in January 2017.”

This event alternates between the north and the south and this year it is up to the south to host the event.

“We decided on Beatty because of the ease of getting permits,” Clausse said. “In Clark County, it costs thousands of dollars for the permit to put on the Cross Vegas event because it is held in a park.”

Clausse said that Spicer Ranch in Beatty, which is owned by David Spicer, has everything the event requires.

“The terrain is perfect, he has the necessary dirt trails and there is even grass,” Clausse said. “The only thing lacking is pavement.”

Clausse said the event is still in the planning stages and he believes it can attract 100 riders the first year out.

Gro Promotions, a consulting firm specializing in bike trails and courses owned by Cimarron Chacon, will be designing the Beatty course. She has designed courses in St. George and is designing the majority of the bike trails in Beatty. Chacon said the Beatty event has not been put on the calendar yet but probably will happen either in mid-or-late January.