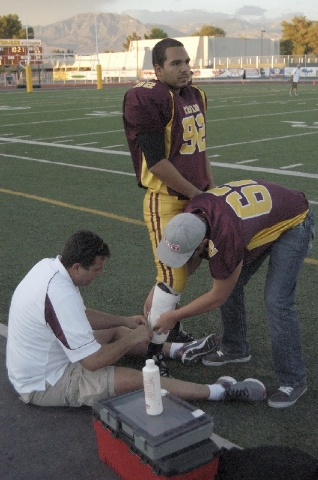 As the Trojans put on the pads for another year, so does Head Trainer Dr. Michael Taylor.

For the past seven years Taylor, of Affiliated Chiropractic of Pahrump, has walked the sidelines.

In 2006, he moved to this valley from a town near Provo, Utah and set up a chiropractic clinic. He had a son who played for the Trojans and he wanted to make a difference.

“I came here begging to help because in Provo that is the way it was. We did not have that here, and Coach Hug said you can do whatever you want. It has been that way ever since,” Taylor said.

Taylor has a passion for football.

“I only missed one season and that was because my wife got a job up in Cedar City. I started off with Coach Hug and went through Verzilli. Andy’s year was the year I only worked one game for them. I did all the games for Joe last year,” he said.

Taylor splits his time between Cedar City and Pahrump because of his practice.

He loves the game so much he donates all his proceeds he makes giving physicals for athletes back to the Trojans Booster Club. This will be his third year donating his fees.

Taylor really gets into the football players and can often be found on the sideline yelling just as much as the coaches. He feels this year will be different for the team.

“This year looks like a good year. I think you are seeing the fruits of a lot of coaches trying to get a program together. I think Joe (head coach) has played a big part because he has coached most of these kids when they were in Pop Warner. So, the kids know him. If you followed the history of Pahrump football, you would know the bottom line is we end up short on players and this year I don’t think this is the case.”

Taylor has seen this year’s front line and was impressed with the size of the players. He also said over the last two years he has seen injuries during games decrease due to better coaching.

“When I first started doing games for Pahrump I was probably on the field seven to 10 times a game,” Taylor said. “This was back in 3-A. Last year I was hardly out there. At first I was on the field for cramps. ‘Seriously,’ I would think, ‘Go to the sideline and fix the cramp, but don’t lay on the field and act like you’re dying.’

“These kids are much more mature than that. When I look at these kids, they are not going to let the other team see them down. We have seen a lot of growth in these kids as they have grown to understand that there is a difference in being injured and being hurt. I give the kids and the coaches a lot of credit for the work they have done.”

As far as serious injuries on the field, Taylor said he has not had to treat them here. The one injury he does fear more than any other, even over a spinal fracture, is the concussion.

“Some concussions … the athlete looks normal so there is some athlete responsibility, we need the truth from the athlete. If we pull you for a concussion, we will not put you back in the game.

“They are my biggest concern because they can last a lifetime,” he said. “For the first few years I was worried about if I was going to have a spinal fracture. It’s not anymore, its the concussion that scares me the most. At least the spinal fracture I know what is in front of me. The concussion I have no idea. It’s all evaluation.”