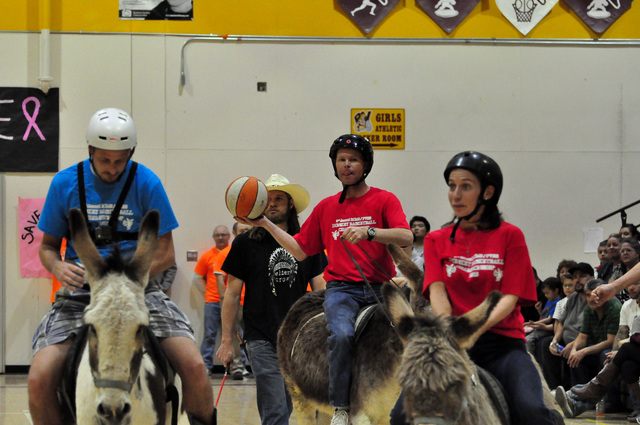 Donkey basketball was a huge success in its third year running at the high school last Friday night.

According to RCMS the event sold 873 tickets, just 21 tickets shy of last year. Donkey basketball made $5,937 and RCMS will split $3,194 with the high school.

The successful fundraiser was started two years ago by Rosemary Clarke Middle School Principal, Tim Wombaker, to raise money for a special fund for his students that pays for incentives and rewards for those who do well with grades, testing and attendance.

During the school year, students have an opportunity to earn bikes or win a trip to the Nugget Bowling Alley or Treasure RV, to name a few. The money is also split with the high school who uses the money to bolster its programs.

The winning team just happened to be Rosemary Clarke Middle School, which picked up its second win in three years. It beat the staff team from the high school 3-0 in the championship game. Is it fixed? Of course not, all the teams ride the same donkeys. Some teams just have a better time of it.

The high school staff team, who won last year’s tourney was disappointed that it didn’t win.

Trojans Coach Craig Rieger said it all with this comment, “No offense …We couldn’t hit water if we fell out of a boat. We were small but we were slow.”