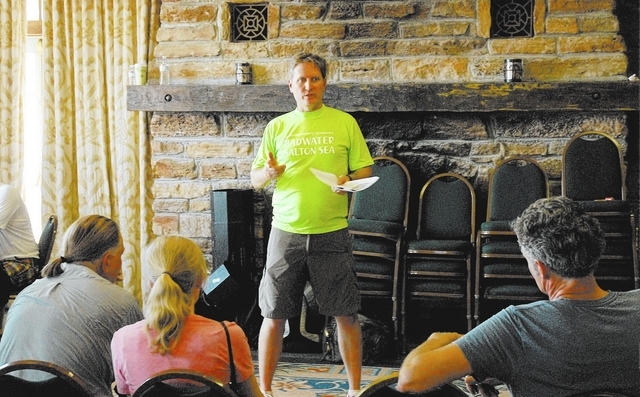 Cheryl Chipman, a spokesperson for Death Valley National Park, said “We are not going to get in a tit-for-tat with Chris or anyone else about this. As I said, we are not eliminating events. Chris chose to move his events this year because we couldn’t guarantee we’d be finished with our review by the time he needed to book rooms at Furnace Creek. That’s a business decision between him and Xanterra.”

In a brief note to the PVT though, Chipman did respond to Kostman’s press release which was published last week in the PVT.

“I was disappointed to see your headline since it is totally false. Our next event is in February and we are accepting applications for fall events. We are not “eliminating events”, banning or cancelling any events. The press release issued by AdventureCorps was not only misleading, it was erroneous. I would have hoped the PV Times would have done more fact checking on their statements. The superintendent’s letter outlines very clearly why we are doing the review, if only people would take the time to read it. Apparently people would prefer to see a dead body instead of mitigation measures to prevent one.”

AdventureCORP event organizer Chris Kostman believes the park is playing the word game. He said he has had 89 events in the valley without a single death or even a citation. He responded to Chipman’s comment by saying, “As for DVNP denying that events are not being “banned” in 2014, and that our statement to that effect is “erroneous” they are playing semantics. The fact of the matter is, one marathon will be held on Feb. 1, but only because the organizers already had their permit in place before the ban went into effect.”

He went on to comment, “The Death Valley National Park staff can “play the safety card” all they want, but they are not the only people concerned with the safety of the event, in fact, far from it. As the organizers of the Badwater 135 and four other events normally held annually within DVNP, we are particularly and necessarily concerned with the safety of both event participants and the public at large. Additionally, a meeting with DVNP staff in December included representatives of both Inyo County and the California Highway Patrol who spoke on behalf of the safety record of the events and lobbied for the events to be held in 2014 and beyond. In our opinion, the DVNP staff are grossly exaggerating the safety issue, and, in so doing, they are smearing the reputation of the Badwater 135 and other events, perhaps to build a case for severely restricting, if not banning, some or all events from being held in the Park.”

Kostman backs up his safety record with a letter written by a current ranger for Death Valley named Jordan Mammel who wrote a letter on the safety of the Century Bike Event on Oct 26, 2013. This was an event she personally monitored for the National Park Service and the letter is written on park stationary.

Mammel said the event is an annual event which takes riders on the northern part of the park which goes through landmarks like Scotty’s Castle, the Ubehebe Crater and Hells’ Gate.

Her report on the ride is highly favorable to AdventureCORP who organizes the event, but Death Valley Superintendent Kathy Billings never makes mention of this letter nor did Ranger Mammel make an appearance at recent meeting between event organizers, Xantera and Inyo County officials held on December 11, 2013.

Mammel praises the event for its organization, “In my opinion, the Century Bicycle Ride is a highly organized event drawing a diverse set of visitors. These visitors are able to enjoy the park in a very unique manner. The event essentially has no impact on the park, the visitors, or any of its resources. It is a nice way to bring revenue to adjacent businesses, and attract cyclist and their supporters to the area. It appears that the event does not need monitoring. There is very little chance of disturbance to other visitors, and this event leaves very little, if any impact. The participants are other outdoor enthusiasts, sharing the joy of seeing a large section of the park with essentially no carbon footprint. In my mind, the park should do whatever it can to encourage and support such events.”

This appears to be on the opposite side of the spectrum from Billing’s letter of Dec. 23, 2013 in which she says there were numerous safety problems with sporting events. “This past year, multiple near misses between event participants and park visitors in vehicles were observed. Park employees who monitor these events and respond to emergency situations caused by the events are exposed to unsafe situations due to extreme weather conditions and the location of events on high speed highways (55-65 mph speed limits).” This is the only letter from Death Valley which mentions any safety violations.

Kostman argues the park will not give him specific incidents and refers to his clean record which is backed up by park rangers, the Inyo County Sheriff’s Department and the California Highway Patrol.

ICSD wrote to the PVT and provided this statement of support from Carma Roper, public information officer for ICSD.

“I just spoke with the Sheriff and he can verify that the following statement is correct: “Not one event participant, supporter, or bystander has been issued a citation by DVNP Rangers, California Highway Patrol, or Inyo County Sheriff’s deputies in association with the event.”

Mammel was not concerned with traffic and so stated in his report, “At this particular Death Valley event, in this venue, this is NOT a concern. It is a perfect place to, “share the road,” so to speak.”

In addition to the letter from Mammel, Kostman has a letter dated Sept. 2, 2013 from current California Highway Patrol officer Scott Wall who praises the safety of the event and wrote in his letter, “I am on the race course during the entire event. I am very impressed at the level of safety under each team operates.”

Kostman wrote in response to the near miss claim, “The DVNP staff can claim “near misses” on the highway between cars and pedestrians all they want, but where is the proof? There have been no deaths associated with any sports event held within the Park, ever. (Contrarily, there have been deaths during sporting events in other Parks, but said events were not stopped.)”

Inyo County and AdventureCORP both attended a Dec. 11, 2013 meeting between them, Xanterra and Death Valley and presented alternative plans to keeping the events alive for 2014. Inyo County Supervisor Matt Kingsley said “this fell on deaf ears.”