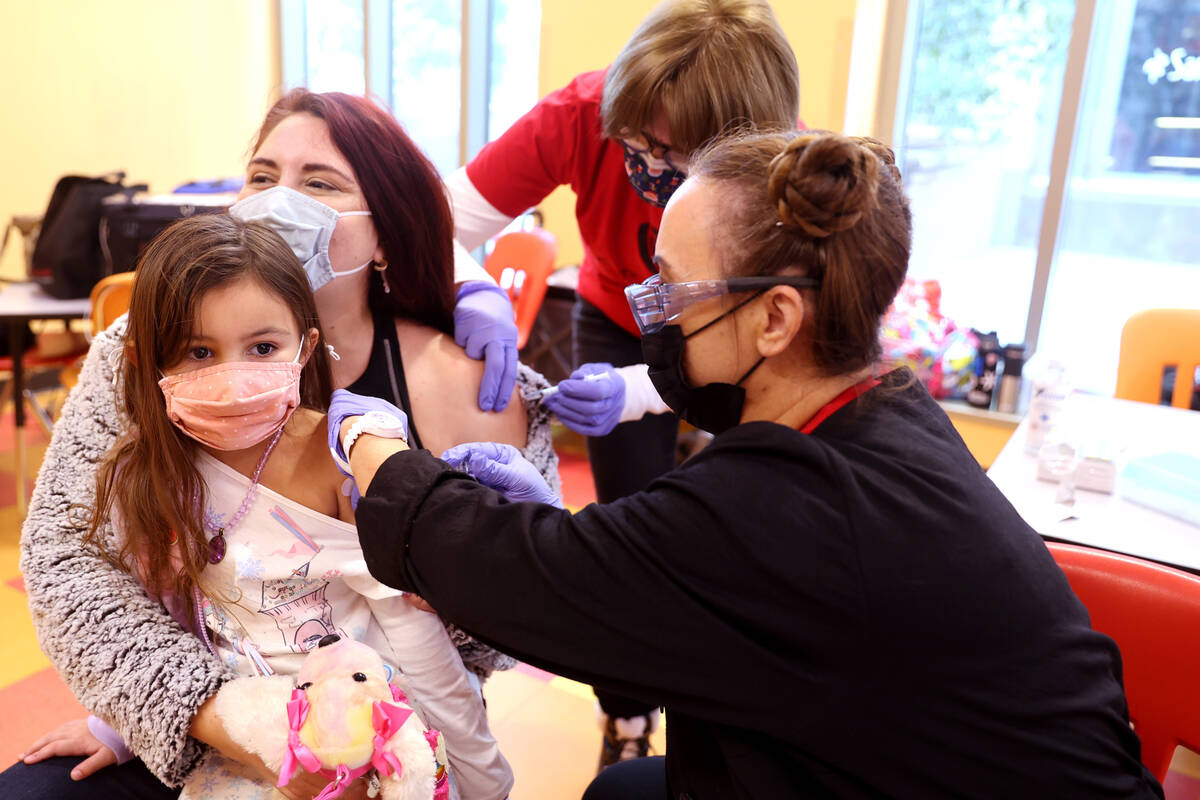 Torrey Cole get a COVID-19 booster shot from Susan Pruitt while her daughter Valentina Morales, 3, gets a flu shot from Yvette Rhebok during a free pop-up "vaccination play date" at Discovery Children's Museum in downtown Las Vegas Monday, Dec. 20, 2021. Every person who gets a vaccination receives two free passes to the museum. Upcoming pop-up clinics with free museum passes include Jan. 17, 22, Feb. 7, 21 and March 10. (K.M. Cannon/Las Vegas Review-Journal) @KMCannonPhoto

Nye County recorded nine new cases and four deaths from COVID-19 between March 16 and Wednesday, but data from the Centers for Disease Control and Prevention showed all of Nevada in the “low” community transmission level, a positive sign as the state moves forward in its pandemic response.

The deaths represent one person in Beatty and three in Pahrump.

More than 6,396 cases of the virus have been reported in Nye County since the first reported case here on March 14, 2020.

Until a few weeks ago, Nevada state officials had reported COVID-19 metrics each day on the statewide dashboard. But citing a number of factors, including “obsolete” statistics, the state Department of Health and Human Services announced on March 10 that it would only report numbers once a week, on Wednesdays.

Case numbers across the state have stayed relatively flat since then. Deaths are often reported well after the fact, and it isn’t always clear exactly when the newly reported deaths happened.

The state reported an increase of 941 cases and 60 deaths in the last week, bringing cumulative totals posted by the state Department of Health and Human Services to 658,075 cases and 10,091 deaths.

The number of people hospitalized with confirmed or suspected cases of COVID-19 also declined, from 192 last week to 140.

The new report came just a day after The Food and Drug Administration on Tuesday authorized an extra dose of the Pfizer or Moderna vaccine for Americans over age 50 and for certain younger people with severely weakened immune systems.

As of Wednesday, state data showed that 56.94 percent of Nevadans five and older were fully vaccinated, compared with 43.8 percent in Nye County.