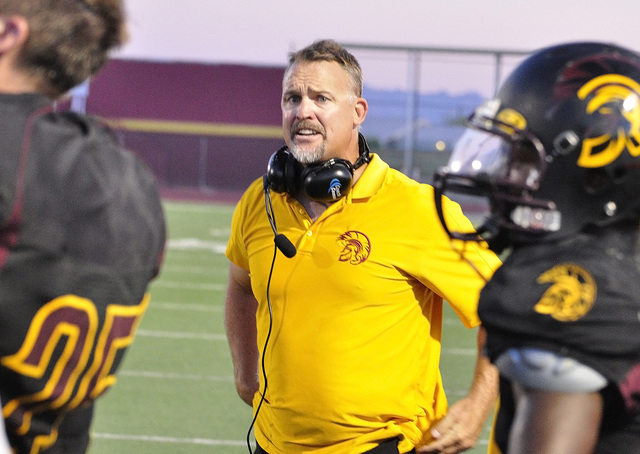 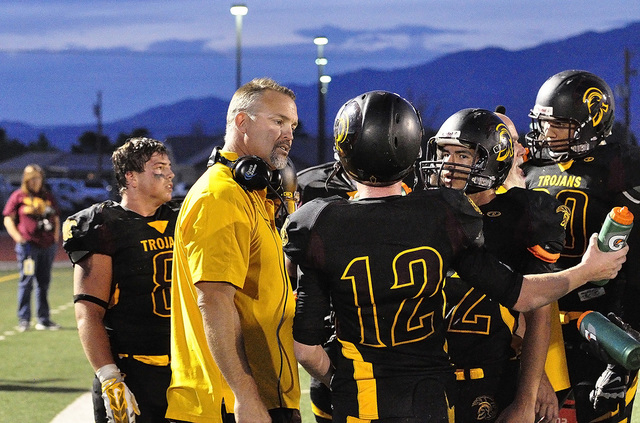 Pahrump Valley High made it official and announced its new football coach for next season, Joe Clayton. He returns to the gridiron after a year of Gent ball, who said he will be moving up to coaching college football.

Clayton had left due to family matters. He had coached for 12 straight years with seven of those years at the high school. The last three years were as the head football coach.

As Trojans head coach, he was 9-19. In 2012 he took the Trojans to the playoffs, which was the first time they had gone since 2006. In his last year of coaching he had close to 100 kids coming out for football.

Annette Fuentes, who has a son on the team, was excited about Clayton returning.

“I think Joe is a great coach,” she said. “He really knows our kids very well because he takes the time know each kid’s strengths. He knows how to communicate with the kids and spends time with every boy on the team.”

Fuentes’ son, Aaron Fuentes played for Clayton during his sophomore year and was excited to have his old coach back too.

“It was like getting a breath of fresh air,” he said. “I love playing football for him because he is an old-school coach that works you hard to get good results.”

Parker Hart will be going out for quarterback and was equally elated.

“I like the program he runs and he makes us work hard,” Hart said.

Trojans football coaches are also excited. Fred Schmidt, longtime lineman coach, will return to coaching because Clayton is coming back.

“All of the coaches that coached with Joe were tight,” he said.

“I am excited to coach with Coach Clayton again,” he said. “We have been coaching football together for about eight years.”

“It feels awesome to be back,” Clayton said. “I left physically, but I never left mentally. It was extremely difficult for me to watch and follow the football program from the outside looking in.”

Clayton said what he missed the most was working with a close staff and the hard-working young men.

“The quality of football that we, as a staff, feel we brought before the 2015 season will continue without skipping a beat,” the coach said. “We plan to continue with the ‘Jet Offense’with a few added wrinkles. In 2013 and 2014, with the Jet Offense, we were able to put up some of the best numbers in scoring and yards in a season that Pahrump has seen in 40 years.”