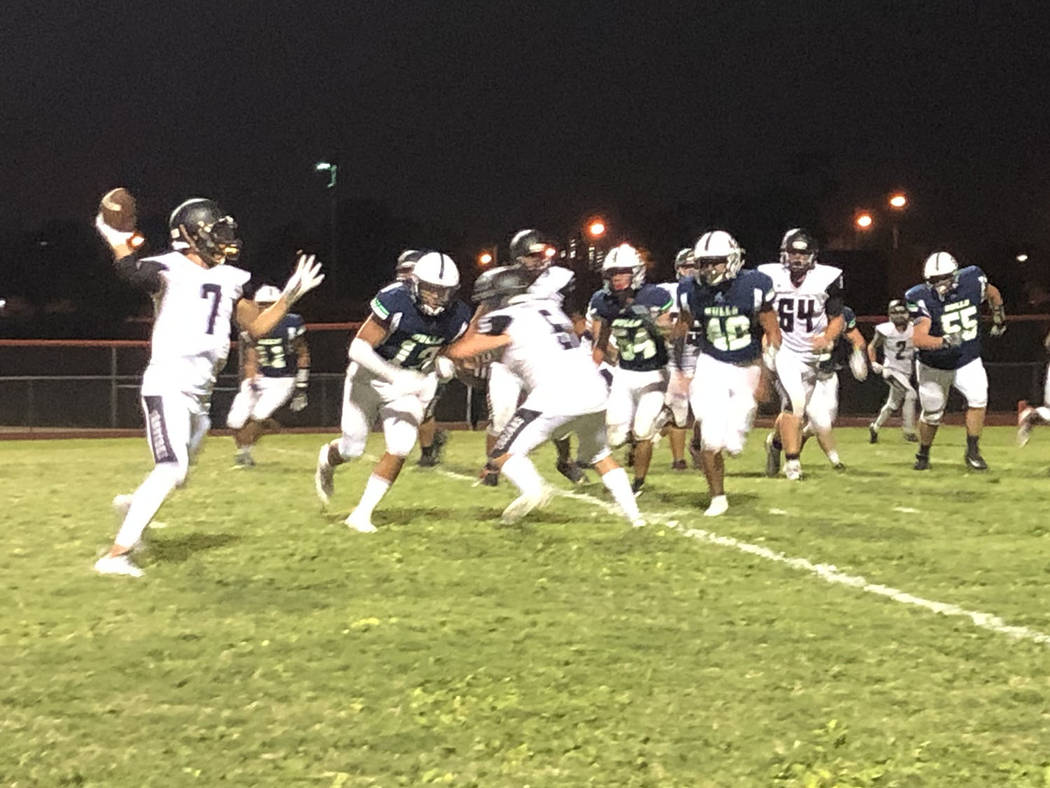 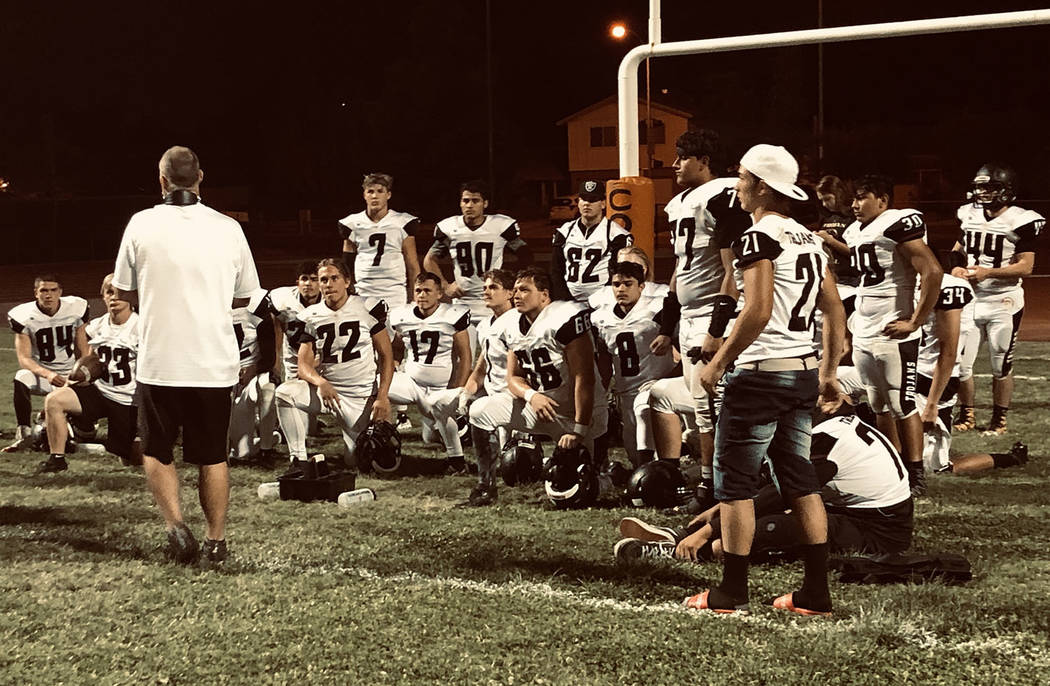 When Pahrump Valley High School football coach Joe Clayton said he was going to utilize a running-back-by-committee approach, he was not kidding.

Ten players carried the ball for the Trojans on Friday night against SLAM Academy, as the ground game racked up 236 yards on 41 carries in a 32-14 win over the Bulls at Chaparral High School in Las Vegas.

In typical Trojans fashion, a close game at halftime became a comfortable win.

“We did what we do in the second half,” Clayton said. “We controlled the clock, we moved the ball, moved the sticks. We got first downs and, ultimately, kept the ball out of their hands.”

The standout on Pahrump Valley’s running back committee Friday night was senior Kenny Delker. The senior, who rushed seven times for 29 yards during the Trojans’ first two games, rushed for 82 yards on 9 carries, including an electrifying 59-yard run for a touchdown on the second play of the second half that, combined with Kody Peugh’s conversion run, pushed the Pahrump Valley lead to 16-7.

Delker scored three of the Trojans’ four touchdowns, with the other coming on two 2-yard runs during the fourth quarter.

“He stepped up when we needed him, especially with Tony Margiotta being out,” Clayton said. “Him having the three touchdowns, he was excited about that. He got more carries than he normally gets and helped us out tremendously.

“He’s got some speed, so when he’s able to get on the edge he’s able to show that speed, especially on that long run. He had a really good game offensively when we needed it. We were able to seal that edge pretty good, and his speed is what ultimately helped us out.”

And the long run was demoralizing to a Bulls team that had outgained the Trojans during the first half, 157-85, in total offense. SLAM put together an impressive 11-play, 87-yard drive, mostly on the ground but capped by an 11-yard pass from sophomore quarterback Joseph Kuykendall to junior Braeden Williams.

Clayton was impressed by the Bulls’ rushing attack but said his team should have done a better job against it.

“I was surprised,” he said. “Their skill guys are a little quicker, a little speedier than we saw on film. They had a few good athletes that helped keep them in the game, but ultimately it was our missed tackles that kept them in the game.”

The Trojans responded in typical fashion, using more than 8 minutes to go 58 yards on their next possession, with no play going for more than 6 yards except for Donnie Miller’s 11-yard scamper to set up first down on the SLAM 11. Three plays later, Peugh rumbled over from 5 yards out, and Andrew Avena’s run put Pahrump Valley up 8-7.

The Bulls followed Delker’s long touchdown run with a drive that gained a couple of first downs before stalling when a fourth-down pass fell incomplete. Another long Pahrump Valley drive followed, with three SLAM penalties assisting a 10-play, 66-yard drive finished by one of Delker’s 2-yard runs.

But perhaps the key play of the drive was an 11-yard run by Dylan Wright in his first game out of the quarterback position. Wright looked impatient on his first two carries, but on the third he read the blocks, hit a hole and scrambled down to SLAM’s 2-yard line to set up Delker’s score that made it 24-7.

“That’s just lack of experience at that position and being able to see the running back holes and the lanes and following his blocks,” Clayton said. “But with experience, he’ll help us out there, too.”

Any chance the Bulls had of erasing the 17-point deficit went away on their next possession. An illegal block wiped out a good kickoff return, then a third-down sack pushed them back to their own 26. Parker Thammavongsa went back to punt but inadvertently touched his knee to the ground while fielding a low snap. The play was blown dead, and the Trojans had the ball on SLAM’s 12.

Peugh left, Miller right and Delker twice to the left covered the short field and it was all over at 32-7. The Bulls scored a late touchdown on an 18-yard pass from Kuykendall to Williams with 3:02 remaining.

Clayton said the biggest difference in the game was his defense did a far better job of tackling during the second half.

“I will say the defense finally played decent in the second half, we just had a lot of missed tackles in the first half,” he said. “Defensively, I think we were in the right spots, we just missed a lot of tackles.”

Clayton cited junior Fabian Soriano as his defensive player of the game.

“Fabian’s a stud,” Clayton said of his junior linebacker. “He missed a couple of tackles early, but they all did. Overall, Fabian stepped up.”

SLAM finished with 263 yards of offense, 209 on the ground and 54 through the air. All of Pahrump Valley’s 236 yards came on the ground.

“The one thing I told them was this time, especially after the last couple of weeks, was keep the momentum on our side,” Clayton said.

Doing that during the second half put the Trojans at 1-2 on the season, while SLAM fell to 1-2. Next up for Pahrump Valley is the homecoming game against Boulder City at 7 p.m. Friday at Trojan Field.