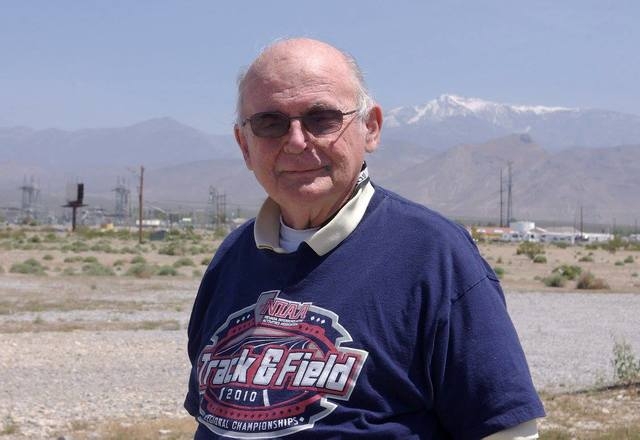 If you ever loved anything so much that it just hurt to be away from it, then you will understand what I am about to say.

Don McDermott, a sports editor for the Pahrump Valley Times from 2001 until 2012, passed away quietly in Las Vegas on Saturday at Mountain View Hospital. According to his doctor, he just stopped breathing and could not be resuscitated.

Some say it was just age catching up to Don. I say differently. Last year he stopped working for the Mirror and he was never the same. He kept on saying he was going to start a job working online for a newspaper in Ohio and that he was leaving. He never made it back to his native Ohio.

I believe that he was so in love with writing sports that he died of a broken heart.

Don threw everything into his work. According to him, he covered 11 Trojans team championships won by three different teams from 2002 until 2008.

He was a man of few words. He was direct, accurate, often stern and a bit on the grouchy side.

He often would cover sports out of pocket (Something reporters have to do more of nowadays) traveling as far North as Reno to cover state tournaments.

Don was a one of a kind. He was what people call “old school.”

He started working for a newspaper when he was only 16.

“My first assignment to cover a sports event was to go to Fawcett Stadium in Canton to cover a football game between Canton McKinley, one of the marquee high school programs in the United States and Cleveland Lincoln,” he wrote in 2012 in the PVT. “I wrote the story sitting at the keyboard of an old United Press International teletype machine.”

The man was a native of Canton, Ohio. He attended Kent State University and served with the U.S. Seventh Army in Germany from 1957-59. McDermott was a career newspaperman and worked for newspapers in Ohio, Pennsylvania, Delaware, North Carolina, Ohio again and Nevada.

The old sports editor rarely liked to take time off, when working for the PVT, and would spend Saturdays and much of the evening hours working and writing.

It was there a young reporter out of college, then named Christina Eichelkraut, now Sampson, was schooled by Don on one of those weekends.

“Don McDermott was the sports writer at the first paper I ever worked at out of college, the Pahrump Valley Times,” Sampson said. “I have a lot of good memories of Don, even though he could be difficult if he was in a mood.”

She tells one story that Don shared with her.

“He told a me about when he was the only one in the newsroom when Kennedy’s assassination came over the teletype (he actually had to go into a pressroom and say, ‘Stop the presses, the president’s been shot.’).”

She said Don would often pass on his wisdom to her.

“He gave me invaluable advice about how to deal with being a young woman in a room full of alpha-type cops and firemen, advice that served me well up to the last paper I worked at,” Sampson said.

Sampson knows he is somewhere today laying out a paper.

“He used to say he had ink for blood and I believed it,” she said. “If Mantle and DiMaggio are playing somewhere right now, I hope Don’s covering it. Running up on deadline, too…”

Don devoted many hours to doing his research and just writing about his adopted teams in Pahrump. Writing was something he just loved to do.

He loved the area so much that he established the Pahrump Valley High School Hall of Fame. He was inducted to his own Hall of Fame in October of 2013.

Age finally forced Don to leave the PVT but he didn’t give up on his writing and he went and worked for the then competition, The Mirror.

I admired his dedication and the love of the games he covered. I respected the choices he made and was saddened when he left the PVT, even though I was glad for the opportunity to start as the new sports editor, but really I knew something special was leaving.

He left his family behind in Ohio to do what he did best, which was writing.

His family was the paper, and really no one out here knew too much about his Ohio family because he chose not to talk about them.

“I think he had at least three kids,” Marie Wujek, publisher of the PVT said.

She knew him the longest and was here at the PVT when Don started. Don shared many laughs with her and her husband.

“I will never forget the conversations my husband Tom and I had with Don over the years,” Wujek said. “Especially when he described how he met and continually covered an up- coming race car driver for NASCAR. At times Don called him arrogant but, most of the time referred to him as a ‘piss spot’, but, in a most admiring way. The driver was Jeff Gordon.”

In the end, he even shared with Marie his last dying wish, which was to be buried with his mother, the only woman that understood him.

When I first started working for the PVT in 2010, Don was a complete mystery to me. One day he pulled me into his office and was very solemn. He showed me pictures of his grandson, Michael, who had died in Afghanistan in 2008. I could tell he was very proud of his grandson.

That was the only time he ever spoke of his family.

I would often see Don at the Pahrump Nugget playing poker. Writing was his first love and poker was his second.

I remember he would always be in a grumpy mood after losing at the poker table.

Horace Langford, the PVT photographer from 2001 until 2014, often knew when Don was having a bad day.

“When Don would come to the paper without his camera,” Langford said. “That meant he had pawned it at the local pawn store to pay a gambling debt.”

Over the years a bond formed between the photographer and the sports writer. It was not quite a friendship but more of mutual respect for each other.

Langford was there to help Don when he had a stroke, or his car would not start, or just simply there as a human being to lend Don a hand.

“I remember when I was called to go get him from the dentist after a failed surgery, he was all doped up and I had to drag him home,” Langford said. “He had a great wealth of sports knowledge and he was definitely dedicated.”

Dann Weeks, his last editor with the Mirror, had this to say about him, “Don loved his work and the subjects of that labor,” he said. “The people that Don wrote about were important to him and that came through in his writing. That type of devoted passion for one’s subject is rarely maintained for an entire career and any journalist would do themselves well to learn from his example.”