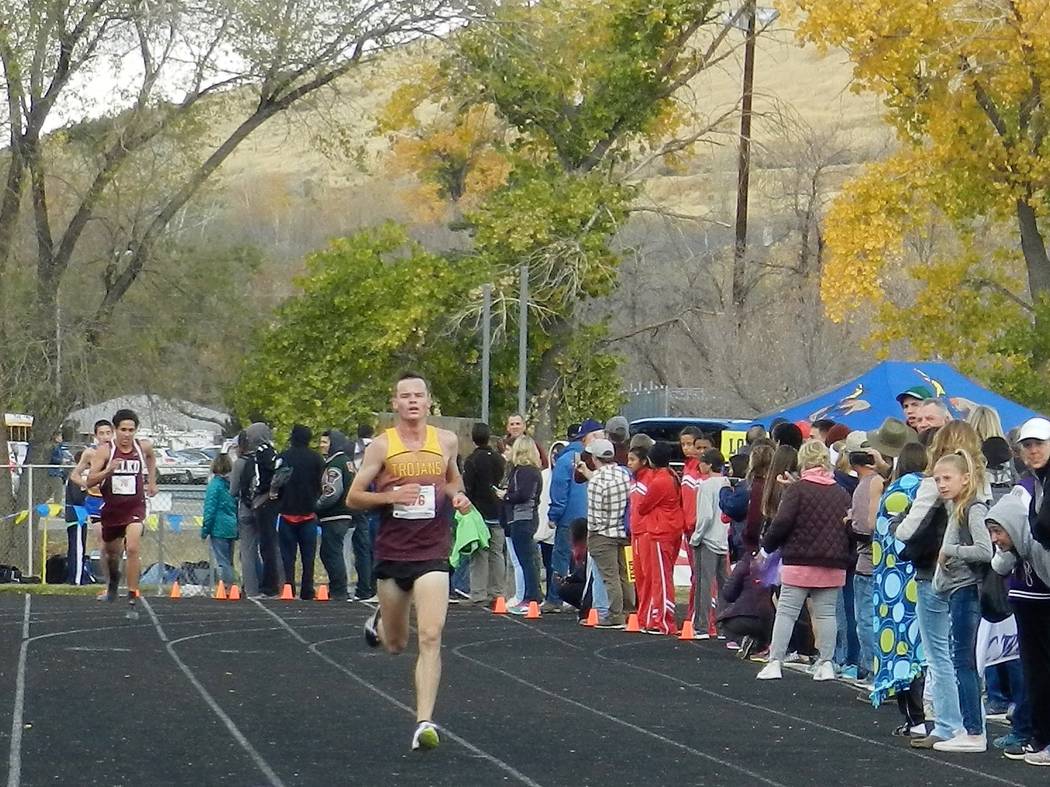 Special to the Pahrump Valley Times Bryce Odegard of Pahrump Valley High School, who finished third in the state Class 3A meet in November after repeating as region champion, has chosen to continue his track and cross-country careers at the College of Idaho. 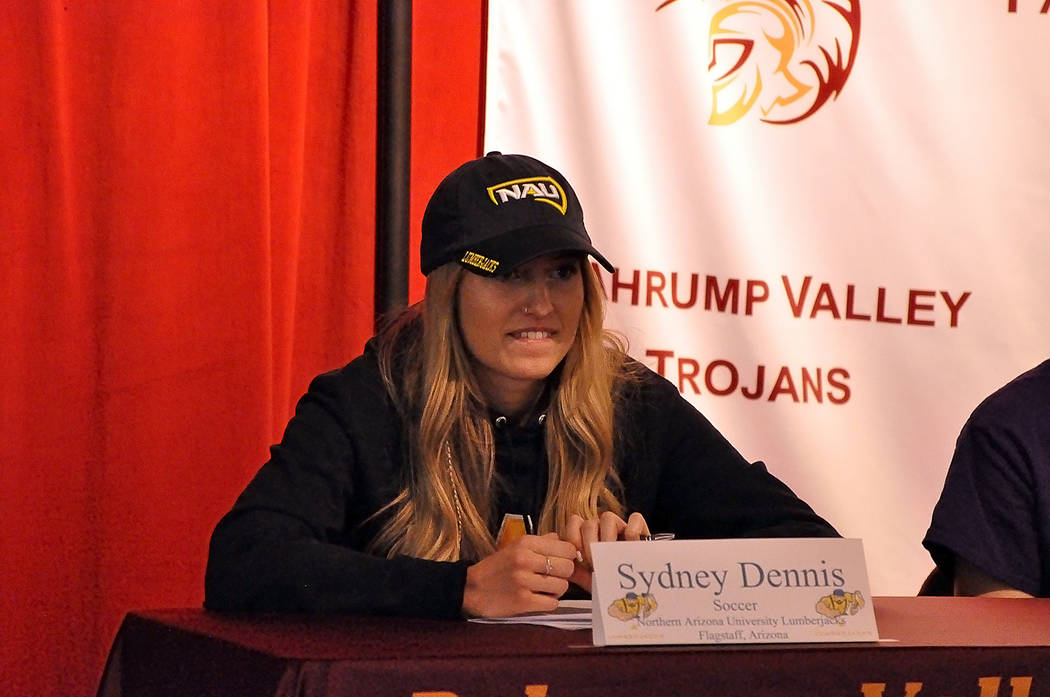 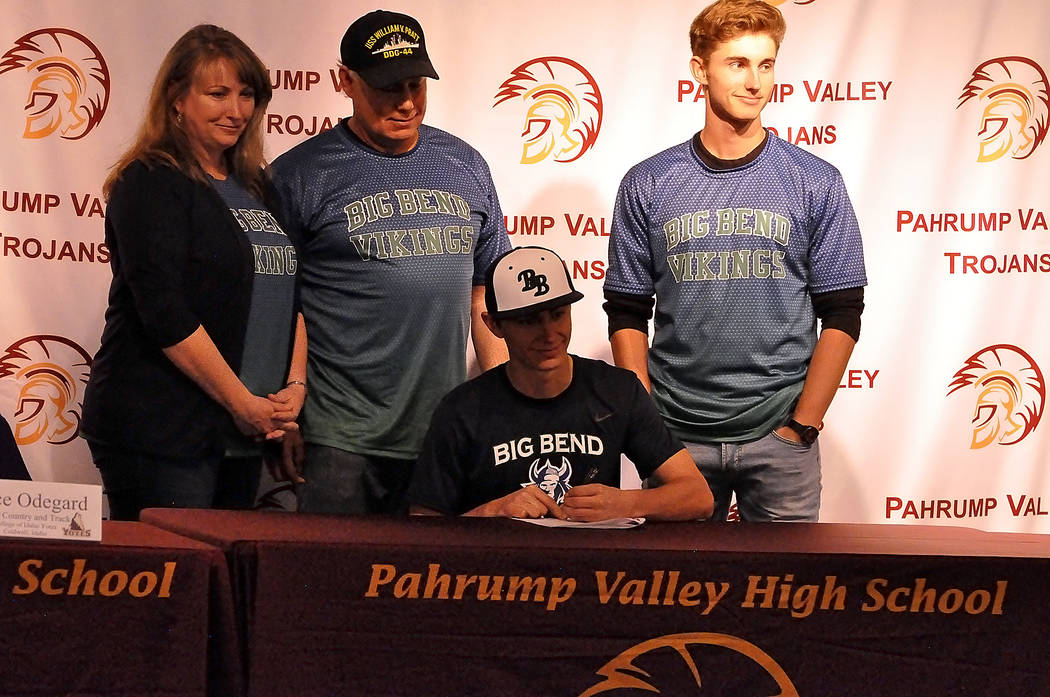 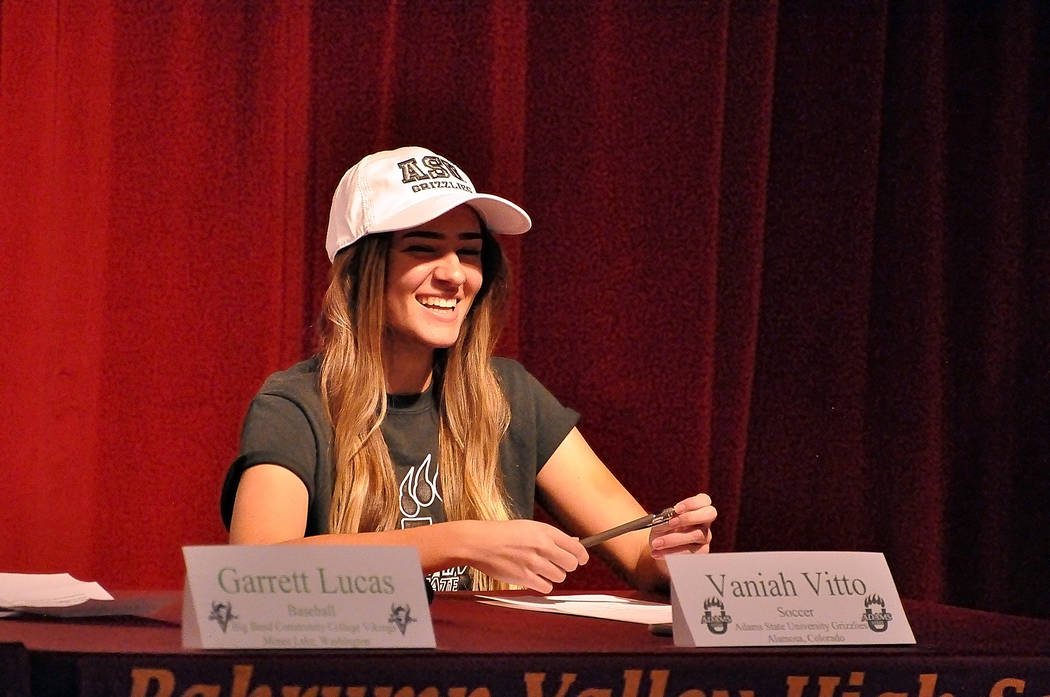 Horace Langford Jr./Pahrump Valley Times Vaniah Vitto of Pahrump Valley High School was one of four student-athletes who made their college decision official Wednesday in the school auditorium. Vitto will play soccer at Adams State University in Alamosa, Colorado.

“Going to state,” they said, almost in unison, Wednesday at a National Letter of Intent signing day event at the school.

Dennis signed with Northern Arizona University in Flagstaff; Vitto signed with Adams State University in Alamosa, Colorado; Bryce Odegard signed to continue his track and field and cross-country careers at the College of Idaho in Caldwell; and Garrett Lucas committed to play baseball at Big Bend Community College in Moses Lake, Washington.

For Dennis, one specific moment sticks out from that trip to state. It was in the Class 3A semifinal against Truckee, a 2-1 overtime loss to the eventual state champion.

“I remember at state we were down 1-0, and it was like the last two minutes,” Dennis recalled. “I remember I got the ball and just kicked it up the field. I was like whatever, go! And Vaniah ran up, and she took on all the defenders and scored, and it was the proudest moment I ever felt in my life. I was like, ‘Oh my gosh, that was my friend.’ So that’s my greatest memory.”

A personal touch, and being in the right place, helped Dennis find the right school.

“I was actually at a camp that my club was putting on, and the coach from NAU was there,” said Dennis, a four-year starter with the Trojans, who scored 64 goals in 62 games. “My coach mentioned that I was interested in the school, so after the camp he invited me to come look at the school. I did, and then they offered me a scholarship.

“As soon as I stepped on campus, I could feel that it was home.”

Websites played a role in the recruiting process for Vitto and Lucas.

“Adams found me from an online website called NCSA,” Vitto said, referring to Next College Student Athlete. “They emailed me and said if you want to play college soccer for us, come to our camp in July. And I did, and they liked me. And then pretty much on the spot, she called me after that and said, ‘I’ll give you a spot on the team.’”

“There’s a website called Field Level,” Lucas said. “They (Big Bend) contacted me on there, so I started looking at it, and the coach asked me to come for a visit.”

Lucas quickly realized he found a home at a school that last year had nine players sign to continue their careers at four-year colleges.

“What sold me on the school was the balance of good baseball and great academics.”

A campus visit sealed the deal for Odegard, who said he received his first recruiting letter as a sophomore from Dickinson State University in North Dakota. From that point, he had plenty of attention from colleges, but he had a friend at the College of Idaho and considered going there, thinking it would be fun to run with someone he knows.

But he wasn’t sold.

“I didn’t think it was the one, no way, when I looked at it at first,” Odegard said. “Then they invited me to do a visit. Once I went up there, it just fit. I just fell in love with it.

“I really liked the Boise area. I had never been there before my visit. But what really sold me was the academic program they have there.”

Pahrump Valley Director of Athletics Larry Goins pointed out how the foursome already has beaten some serious odds. Nationally, one in nine high school baseball players go on to compete at the college level, he said. For soccer, it’s one in 13, and for track and field, it’s one in 17. “For them to be recruited is an outstanding accomplishment,” he told the audience.

Although the track and field odds are the longest of the three, Odegard’s accomplishments made recruiters take notice. Pahrump Valley’s first individual state cross-country champion — he won the Class 3A race as a junior — is a two-time regional champion and a three-time all-state performer.

He is going to a school with serious running credentials. College of Idaho has had three consecutive top-10 finishes at the NAIA championships in cross-country and had five individual qualifiers for nationals in track and field in 2017.

But while Odegard is looking forward to college life and majoring in environmental studies, his heart was clearly in Pahrump on Wednesday. He nearly teared up at one point, using the word “love” twice as he thanked coaches, teammates and his training partner. Then, after earlier telling the audience he had started a novella for the occasion before his parents urged him to, in the interest of time, keep it brief, he came full circle.

“Everyone says it, but you really can’t get anywhere without your parents,” Odegard said.

Family was a theme throughout the event. Each athlete thanked parents and siblings as well as coaches and teammates. Near the end, as each one signed his letter — except for Lucas, who, per NJCAA guidelines, already had done so, so he signed for the cameras — the families were brought up to share the moment.

But if Lucas already had signed with Big Bend, it didn’t dampen the enthusiasm of his family, as his parents and brother sported shirts with “Big Bend Vikings” proudly emblazoned across the front when it was their turn to go on stage. Lucas had included Goins in his list of people to thank, acknowledging his “super-cool athletic director.”

Goins pointed out that in addition to success on the soccer field, Vitto is in the running for top academic honors for the class of 2018.

“I would advise you not to bet against her,” he said of the future nursing major. “She is a competitor.”

Then it was left to the “super-cool” Goins to put a bow on the morning’s festivities.

“Today marks a new chapter,” he told the quartet. “This is your book. It’s your story. What’s the next chapter? It’s up to you. But you will always be a Pahrump Valley Trojan.”