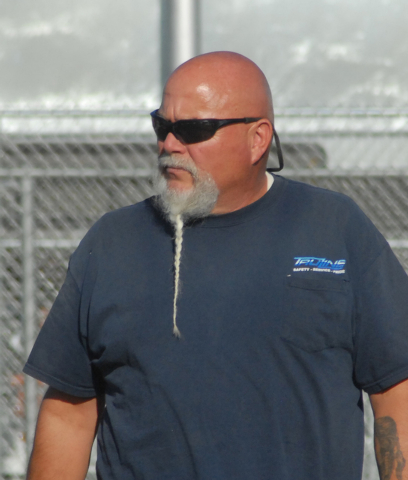 Fred Schmidt left coaching at Pahrump Valley High School quietly after wrestling season. He will be remembered as one of the great coaches. For some years now the coach did three sports at the high school: football, wrestling and track.

According to Craig Rieger, head wrestling coach, he coached about 9-10 years in wrestling, about five years coaching the line in football and seven to nine coaching the shot put and discus in track.

In wrestling Rieger said he will miss coaching with him. “Fred is a hard worker. He is always trying to learn more about the sport. Most important, he teaches values that students will use in their life,” he said.

He will be missed. I remember talking to him for the last three years about football and watching his linemen work. He would make the boys lift these huge tractor and truck tires. He had no problems inflicting pain on the young men, but boy did that pain in late August pay off in early fall. He worked hard with the Clayton boys, the Daffer boys, Jeremy Coates, Jonathan Corrow and Jeremiah England, to name a few.

Schmidt once told the paper, “If they have a desire to be successful, then aggressiveness comes with that. When they understand that they have a common goal, the faster they get there and the quicker they make decisions promotes aggressiveness. They can’t be passive and get there,” he said.

In track he knew his business which was throwing. Current Trojans Athletic Director Ed Kirkwood said he was a master at the throws.

“He was up on anything current in the events,” he said. “That with some old- school coaching experience, made his athletes prepared every time out. He was easy to work with. Always prepared and ready to go. He was a great motivator too. The kids always strived to achieve personal best every meet.”

I remember some of his students of the shot put. He was a man that knew his business and had the patience to teach what he knew with a lot of success. He would turn mild-mannered young girls into beasts that could throw a shot put. Meagan Hamrick was a great one and so was Amanda Head. Head came in second place at state and was only a few feet from being state champion.

On Head, Schmidt said, “The success of these throws, a lot of people think of a strong man, or upper body and it is not. It is 85 percent lower body, hips, and drive out of the legs. Amanda I would have to say, is the fastest shot put and discus person in Nevada. Nobody is going to outrun her,” he chuckled. “She has the lower body strength. She works hard. As far as catching Ashlie Blake-number one in the shot and discus in Division I, it is a tall order…”

Schmidt will be missed on the field and on the mat. I wish him well and hope to see him in the stands.